The Korherr Report is a 16-page document on the progress of the Holocaust as reflected in the dwindling numbers of Jews in Germany and German-controlled Europe. It was written in January 1943 by the chief inspector of the statistical bureau of the SS and professional statistician Dr Richard Korherr under the title die Endlösung der Judenfrage, in English the Final Solution to the Jewish Question.[1] Korherr, commissioned by Heinrich Himmler calculated that, from 1937 to December 1942, the number of Jews in Europe had fallen by 4 million. The proportional decrease of Soviet Russian Jews from the territories overrun in Operation Barbarossa was not included due to lack of statistical data. The summaries came from the RSHA office receiving all SS reports about the so-called "already evacuated" Jews. Their "special treatment" (Sonderbehandlung, a code word for mass murder) was removed from the document on the request of Himmler who intended to share it with Hitler.[2] 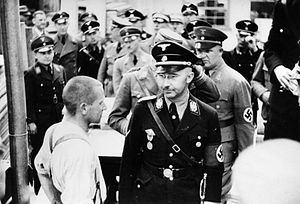 The main report, published in March of that year, summarized how many Jews remained in Germany, Austria and Europe; detailed the numbers of Jews detained in the Nazi concentration camps; how many Jews had died natural deaths since 1933; and how many Jews had been evacuated to the eastern territories.[1] Himmler accepted the report, but made Korherr change the word Sonderbehandlung or "special treatment," to the word durchgeschleust or "processed."[3] The report calculated that, from 1937 to December 1942, the number of Jews in Europe had fallen by 4 million.[1]

By way of explanation, Korherr added that "It must not be overlooked in this respect that of the deaths of Soviet Russian Jews in the occupied Eastern territories only a part was recorded, whereas deaths in the rest of European Russia and at the front are not included at all. In addition there are movements of Jews inside Russia to the Asian part which are unknown to us. The movement of Jews from the European countries outside the German influence is also of a largely unknown order of magnitude. On the whole European Jewry should since 1933, i.e. in the first decade of National Socialist German power, have lost almost half of its population."[1]

Korherr was never a member of the SS[4] and denied all knowledge of the Holocaust, saying that he had “only heard about exterminations after the collapse in 1945.”[5]

In a letter he sent to the German magazine Der Spiegel in July 1977, Korherr said that he had not written the report on Himmler’s order”[4] and that the “statement that I had mentioned that over a million Jews had died in the camps of the Generalgouvernement and the Warthegau through special treatment is also inaccurate. I must protest against the word ‘died’ in this context. It was the very word ‘Sonderbehandlung’ [‘special treatment’] that led me to call the RSHA by phone and ask what this word meant. I was given the answer that these were Jews who were settled in the Lublin district.”[4]