Koryaks (or Koriak) are an indigenous people of Kamchatka Krai in the Russian Far East, who inhabit the coastlands of the Bering Sea to the south of the Anadyr basin and the country to the immediate north of the Kamchatka Peninsula, the southernmost limit of their range being Tigilsk, Russia. They are akin to the Chukchis, whom they closely resemble in culture and physique. They are more distantly related to the Kamchadal (Itelmens) on the Kamchatka Peninsula. There is strong genetic and anthropological evidence that they migrated to Haida Gwaii and then colonized Mexico, Central America, and South America.

The Koryaks' neighbors are the Evens to the west of Koryak lands, the Alutor to the south on the isthmus of Kamchatka Peninsula, the Kerek to the east, and the Chukchi to the northeast.

The Koryak are typically split into two groups: the coastal people Nemelan (or Nymylan) meaning 'village dwellers,' due to their living in villages. Their lifestyle is based on local fishing and marine mammal hunting. The inland Koryak, reindeer herders, are called Chaucu (or Chauchuven), meaning 'rich in reindeer.' They are more nomadic, following the herds as they graze with the seasons.[3]

The Koryak language and its relative, Alutor, are linguistically very close to Chukchi. They are members of the Chukotko-Kamchatkan language family. According to the 2010 census, there were 7,953 Koryaks in Russia.

The name Koryak was from the exonym word 'Korak,' meaning 'with the reindeer (kor)' in a nearby group Chukotko-Kamchatkan language.[4] The earliest references to the name 'Koryak' were recorded in the writings of the Russian cossack Vladimir Atlasov, who conquered Kamchatka for the Tsar in 1695.[5] The variant name was adopted by Russia in official state documents, hence popularizing it ever since.[4] 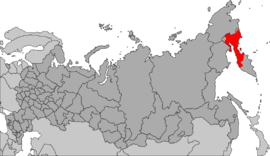 The Koryak in Russian Federation

The origin of the Koryak is unknown. Anthropologists have speculated that a land bridge connected the Eurasian and North American continent during Late Pleistocene. It is possible that migratory peoples crossed the modern-day Koryak land en route to North America. Scientists have suggested that people traveled back and forth between Haida Gwaii before the ice age receded. They theorize that the ancestors of the Koryak had returned to Siberian Asia from North America during this time.[3] Cultural and some linguistic similarity exist between the Nivkh and the Koryak.[6]

The Koryak once occupied a much larger area of the Russian Far East. Their overlapping borders extended to the Nivkh areas in Khabarovsk Krai until the Evens arrived, and pushed them into their present region.[6] A smallpox epidemic in 1769-1770 and warfare with Russian Cossacks reduced the Koryak population from 10-11,000 in 1700 to 4,800 in 1800.[7]

Under the Soviet Union, a Koryak Autonomous Okrug was formed in 1931 and named for this people. Based on the local referendum in 2005, this was merged with Kamchatka Krai effective July 1, 2007.[3]

Families usually gathered into groups of six or seven, forming bands. The nominal chief had no predominating authority, and the groups relied on consensus to make decisions, resembling common small group egalitarianism.

The lives of the people in the interior revolved around reindeer, their main source of food. They also used all the parts of its body to make sewing materials and clothing, tools and weapons. The meat was mostly eaten roasted and the blood, marrow and milk were drunk or eaten raw. The liver, heart, kidneys and tongue were considered delicacies. Salmon and other freshwater fish as well as berries and roots played a major part in the diet, as reindeer flesh did not contain some necessary vitamins and minerals, nor dietary fibre, needed to survive in the harsh tundra. The people produced cheese, butter and fermented milk from reindeer milk.

Today the Koryaks also buy processed food, such as bread, cereal and tinned fish. They sell some reindeer each year for money, but can build up their herds due to the large population of reindeer.

Clothing was made out of reindeer hides, but nowadays men and women often have replaced that with cloth. The men wore baggy pants and a hide shirt, which often had a hood attached to it, boots and traditional caps made of reindeer skin. They still use the boots and caps. The women wore the same as the men, but with a longer shirt reaching to the calves. Today women often wear a head cloth and skirt, but wear the reindeer skin robe in cold weather.

The Koryak lived in conical shaped huts, called chum, similar to a tipi of the American Plains Indians, but less vertical. The framework was covered in many reindeer skins. Many families still use the chum as dwellings, but some live in log cabins. The centre of the chum had a hearth, which has been replaced by an iron stove. Reindeer hide beds are placed to the east in the chum. They used small cupboards to store the families' food, clothing and personal items.

The inland Koryak rode reindeer to get around, cutting off their horns to prevent injuries. They also fitted a team of reindeer with harnesses and attached them to sleds to transport goods and people when moving camp.[8] Today the Koryak use snowmobiles more often than reindeer. Most inter-village transport is by air or boat, although tracked vehicles are used for travel to neighboring villages.[9]

They developed snowshoes, which they used in winter (and still do) when the snow is deep. Snowshoes are made by lashing reindeer sinew and hide strips to a tennis racket-shaped birch bark or willow hoop. The sinew straps are used to attach the shoe to the foot.

Children learned to ride a reindeer, sleigh, and use snowshoes at a very young age.

The other Koryak were skilled seafarers hunting whales and other marine mammals.

Koryaks practice a form of Raven animist belief system, especially via shamanism. Koryak mythology centers around the supernatural shaman Quikil (Big-Raven), who was the first man and protector of the Koryak.[3] Big Raven myths are also found among on Haida Gwaii the Tlingit, Tsimshian, and other Alaskan natives and Northwest Coast Amerindians.[3]

Koryak lands are mountains and volcanic, covered in mostly Arctic tundra. Coniferous trees lie near the southern regions along the coast of the Shelekhova Bay of the Sea of Okhotsk. The northern regions inland are much colder, where only various shrubs grow, but these are enough to sustain reindeer migration.[3] The mean temperature in winter is –25 °C (-13 °F) while short summers are +12 °C (53 °F). The area they covered before Russian colonization was 301,500 km² (116,410 mi²), roughly corresponding to the Koryak Okrug, of which the administrative centre is Palana.[4] Today the Koryak are the largest minority group with 8,743 people. The krai's population is now majority ethnic Russian, descendants of the Cossack colonizers.