Kostiantynivka (Ukrainian: Костянтинівка, Russian: Константиновка) is an industrial city in the Donetsk Oblast (province) of eastern Ukraine, on the Kryvyi Torets River. Administratively, it is incorporated as a city of oblast significance. It also serves as the administrative center of Kostiantynivka Raion (district), though it does not belong to it. It's also known as Kostyantynivka or Konstantinovka. It developed in the Soviet era into a major centre for the production of iron, zinc, steel and glass. Population: 77,066 (2013 est.)[1]; 95,111 (2001). 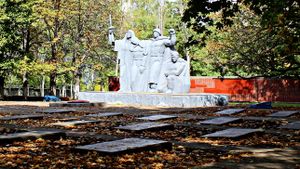 In 1870 Kostiantynivka was founded by a land owner Nomikossov who built the settlement in honor of his oldest son, Kostiantyn. In the beginning of the 20th century Kostiantynivka developed into an industrial settlement, and was later raised into the rank of an urban type (1926). In 1932 Kostyantynivka was granted municipal rights.

During the Ukrainian crisis, the town was captured in mid-April 2014[2][3] by pro-Russian separatists.[4][5] The city was eventually retaken by Ukrainian forces on 7 July 2014, along with Druzhkivka.[6][7] A Ukrainian armoured personnel carrier struck and killed an eight-year-old girl in the city on 16 March 2015. The incident sparked riots among residents, many of whom oppose the presence of Ukrainian troops.[8]

Native language as of the Ukrainian Census of 2001:[9]