The Kraków Ghetto was one of five major, metropolitan Jewish ghettos created by Nazi Germany in the new General Government territory during the German occupation of Poland in World War II. It was established for the purpose of exploitation, terror, and persecution of local Polish Jews, as well as the staging area for separating the "able workers" from those who would later be deemed unworthy of life. The Ghetto was liquidated between June 1942 and March 1943, with most of its inhabitants sent to their deaths at Bełżec extermination camp as well as Płaszów slave-labor camp,[1] and Auschwitz concentration camp, 60 kilometres distance.[2]

See also: Jewish ghettos in German-occupied Poland and The Holocaust in Poland

Before the German-Soviet invasion of 1939, Kraków (Cracow) was an influential centre for the 60,000–80,000 Polish Jews who had lived there since the 13th century.[3] Persecution of the Jewish population of Kraków began immediately after the German troops entered the city on 6 September 1939 in the course of the invasion. Jews were ordered to report for forced labour beginning in September 1939. In November, all Jews twelve years or older were required to wear identifying armbands. Throughout Kraków, synagogues were closed and all their relics and valuables confiscated by the Nazi authorities.[2][3]

By May 1940, the Nazi occupation authority under Gauleiter Hans Frank announced that Kraków should become the "racially cleanest" city in the General Government (an occupied, but unannexed part of Poland). Massive deportations of Jews from the city were ordered. Of the more than 68,000 Jews in Kraków when the Germans invaded, only 15,000 workers and their families were permitted to remain. All other Jews were ordered out of the city, to be resettled into surrounding rural areas of the Generalgouvernement.[3]

The Kraków Ghetto was formally established on 3 March 1941 in the Podgórze district and not, as often believed, in the historic Jewish district of Kazimierz. Displaced Polish families from Podgórze took up residences in the former Jewish dwellings outside the newly established Ghetto. Meanwhile, 15,000 Jews were crammed into an area previously inhabited by 3,000 people who used to live in a district consisting of 30 streets, 320 residential buildings, and 3,167 rooms. As a result, one apartment was allocated to every four Jewish families, and many less fortunate lived on the street.[3]

The Ghetto was surrounded by the newly built walls that kept it separated from the rest of the city. In a grim foreshadowing of the near future, these walls contained brick panels in the shape of tombstones. All windows and doors that opened onto the "Aryan" side were ordered to be bricked up. Only four guarded entrances allowed traffic to pass in or out. Small sections of the wall still remain today, one part is fitted with a memorial plaque, which reads ""Here they lived, suffered and perished at the hands of Hitler's executioners. From here they began their final journey to the death camps.".[2][4]

Young people of the Akiva youth movement, who had undertaken the publication of an underground newsletter, HeHaluc HaLohem ("The Fighting Pioneer"), joined forces with other Zionists to form a local branch of the Jewish Fighting Organization (ŻOB, Polish: Żydowska Organizacja Bojowa), and organize resistance in the ghetto, supported by the Polish underground Armia Krajowa. The group carried out a variety of resistance activities including the bombing of the Cyganeria cafe – a gathering place of Nazi officers. Unlike in Warsaw, their efforts did not lead to a general uprising before the ghetto was liquidated.

From 30 May 1942 onward, the Nazis began systematic deportations from the Ghetto to surrounding concentration camps. Thousands of Jews were transported in the succeeding months as part of the Aktion Krakau headed by SS-Oberführer Julian Scherner. Jews were assembled on Zgody Square first and then escorted to the railway station in Prokocim. The first transport consisted of 7,000 people, the second, of additional 4,000 Jews deported to Bełżec death camp on 5 June 1942. On 13 – 14 March 1943, the final 'liquidation' of the ghetto was carried out under the command of SS-Untersturmführer Amon Göth (his SS rank being the equivalent to a 2nd Lieutenant). Eight thousand Jews deemed able to work were transported to the Płaszów labor camp. Those deemed unfit for work – some 2,000 Jews – were killed in the streets of the ghetto on those days with the use of "Trawniki men" police auxiliaries.[5] Any remaining were sent to Auschwitz.[4]

The only working pharmacy enclosed within the Kraków Ghetto belonged to Tadeusz Pankiewicz, a Polish Roman Catholic pharmacist permitted by the German authorities to operate his "Under the Eagle Pharmacy" there, upon his request. The scarce medications and tranquilizers supplied to the ghetto's residents – often free of charge – apart from health-care considerations, contributed to their survival. Pankiewicz passed around hair dyes to Jews compelled to cross the ghetto walls illegally. In recognition of his heroic deeds in helping countless Jews in the Ghetto during the Holocaust, he was bestowed the title of the Righteous among the Nations by Yad Vashem on February 10, 1983. Pankiewicz is the author of a book describing, among other events, the ghetto liquidation.[4][6]

The list of several dozen Polish Righteous from Kraków,[7] includes Maria and Bronisław Florek who lived at Czyżówka Street and saved Goldberger and Nichtberger families. Notably, Maria Florek smuggled forged identity papers procured at the Emalia Factory of Oskar Schindler (without his awareness), for the Jews hiding on the 'Aryan side' of Kraków.[8] Władysław Budyński, who provided help without remuneration even to complete strangers, ended up marrying a Jewish girl, Chana Landau in 1943, but they were caught by Gestapo in 1944 and deported to different concentration camps. Both survived, reunited in Kraków, and in 1969 emigrated to Sweden.[9] Polish gynaecologist Dr Helena Szlapak turned her home at Garbarska Street into a safe house for trafficked Jews and distribution of falsified documents as well as secret messages and storage of photographs from Auschwitz. She collaborated with Żegota, attended to sick Jews in hiding and placed them in hospitals under false identities.[10] 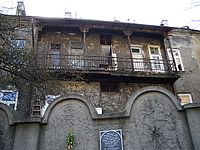 One of two preserved segments of Ghetto wall, with a memorial plaque and typical ghetto home in the background

Memorial to Jews from the Kraków Ghetto on their deportation site. Each steel chair represents 1,000 victims

Movie director Roman Polanski, a survivor of the Ghetto, in his 1984 memoir Roman evoked his childhood experiences there before the mass deportations of Operation Reinhard in Kraków. "My own feeling – Polański wrote – was that if only one could explain to them that we had done nothing wrong, the Germans would realize that it all was a gigantic misunderstanding."[11]

Many years later, Roma Ligocka, Polish artist and author, and a first cousin to Roman Polański who, as a small girl, was rescued and survived the Ghetto, wrote a novel based on her experiences, The Girl in the Red Coat: A Memoir. She is mistakenly thought to be portrayed in the film Schindler's List. The scene, however, was constructed on the memories of Zelig Burkhut, survivor of Plaszow (and other work camps). When being interviewed by Spielberg before the making for the film, Burkhut told of a young girl wearing a pink coat, no older than four, who was shot by a Nazi officer right before his eyes. Oskar Schindler was portrayed in the Thomas Keneally novel Schindler's Ark (filmed by Steven Spielberg as Schindler's List). In an especially dramatic event, 300 of Schindler's workers were deported to the Auschwitz death camp despite his efforts, and he personally intervened to return them to him.

Other notable people include Mordechai Gebirtig, who was one of the most influential and popular writers of Yiddish songs and poems. He died there in 1942. Miriam Akavia, an Israeli writer, survived the Kraków ghetto and concentration camps. Renowned dermatologist and co-discoverer of Reyes Syndrome, Dr Jim (Jacob) Baral was also a Kraków Ghetto survivor. Bernard Offen, born in 1929 in Kraków survived the Ghetto and several Nazi concentration camps.