From Infogalactic: the planetary knowledge core
Jump to: navigation, search
For other uses of "Krasnodar", see Krasnodar (disambiguation).

Krasnodar (Russian: Краснода́р; IPA: [krəsnɐˈdar]) is a city and the administrative center of Krasnodar Krai, Russia, located on the Kuban River, approximately 148 kilometers (92 mi) northeast of the Black Sea port of Novorossiysk. As of the 2010 Census, its population was 744,995.[7] 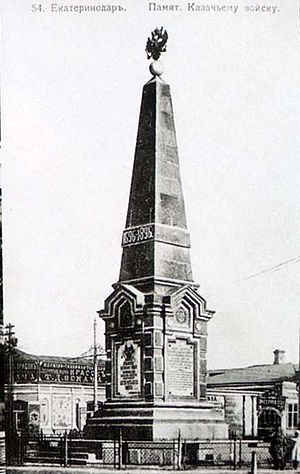 A 19th century photograph of the Kuban Cossacks Obelisk in Yekaterinodar

Krasnodar was founded on January 12, 1794 (Gregorian calendar)[2] as Yekaterinodar (Екатеринода́р). The original name meant "Catherine's Gift", recognizing both Catherine the Great's grant of land in the Kuban region to the Black Sea Cossacks[15] (created from former Zaporozhian Cossacks) and Saint Catherine of Alexandria, who is considered to be the patron of the city. City status was granted in 1867.[9] 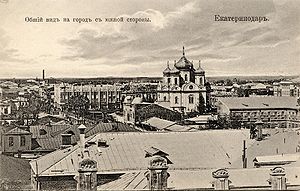 Yekaterinodar in the early 20th century

The city originated in 1793 as a military camp, then as a fortress built by the Cossacks to defend imperial borders and to assert Russian dominion over Circassia, a claim which Ottoman Turkey contested. In the first half of the 19th century, Yekaterinodar grew into a busy center of the Kuban Cossacks, gaining official town status in 1867.[citation needed] By 1888 about 45,000 people lived in the city, which had become a vital trade center for southern Russia. In 1897 an obelisk commemorating the two-hundred-year history of the Kuban Cossacks (seen as founded in 1696) was erected in Yekaterinodar.

During the Russian Civil War (1917-1922) the city changed hands several times, coming successively under the control of the Red Army and of the Volunteer Army. Many Kuban Cossacks, as committed anti-Bolsheviks, supported the White Movement. Lavr Kornilov, a White general, captured the city on April 10, 1918, only to be killed a week later when a Bolshevik artillery shell blew up the farmhouse where he had set up his headquarters.

During World War II units of the German Army occupied Krasnodar between August 12, 1942 and February 12, 1943. The city sustained heavy damage in the fighting, but was rebuilt and renovated after the war. German forces, including Gestapo and "mobile SS execution squads", killed thousands of Jews, Communists, and "supposed Communist 'partisans.'" Shooting, hanging, burning, and even gas vans were used.[17]

In the summer of 1943 the Soviets began trials, including of their own citizens, for collusion with the Nazis and for participation in war crimes. The first such trial took place at Krasnodar from July 14 to 17, 1943. The Krasnodar tribunal pronounced eight death sentences, which were summarily carried out in the city square in front of a crowd of about thirty thousand people. 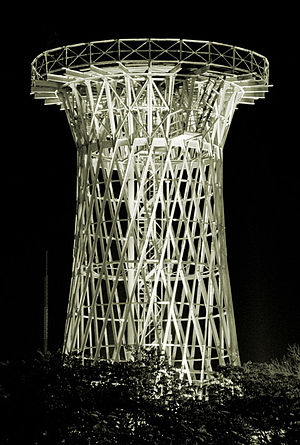 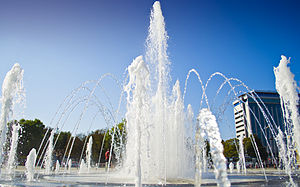 The Splash Fountain in Krasnodar 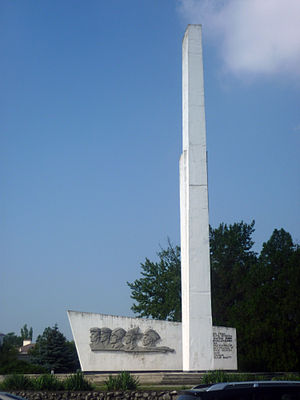 Krasnodar is home to the steel lattice hyperboloid tower built by the Russian engineer and scientist Vladimir Grigorievich Shukhov in 1928; it is located near Krasnodar Circus.

Other attractions include St. Catherine's Cathedral, the State Arts Museum, a park and theater named after Maxim Gorky, the beautiful concert hall of the Krasnodar Philharmonic Society, which is considered to have some of the best acoustics in southern Russia, State Cossack Choir and the Krasnodar circus

Theater Square is home to the largest splash fountain in Europe.[18] This fountain was officially inaugurated on September 25, 2011 along with the official ceremony to celebrate the City Day in Krasnodar.

Krasnodar is the economic center of southern Russia. For several years, Forbes magazine named Krasnodar the best city for business in Russia.[19] The industrial sector of the city has more than 130 large and medium-sized enterprises.

The main industries of Krasnodar:

Krasnodar is a highly developed commercial area, and has the largest annual turnover in the Southern Federal District of Russia. Retail trade turnover in 2010 reached 290 billion rubles. Per capita, Krasnodar has the highest number of malls in Russia. Note that in the crisis year 2009 turnover of Krasnodar continued to grow, while most of the cities showed a negative trend in the sale of goods.

Krasnodar has the lowest unemployment rate among the cities of the Southern Federal District at 0,3% of the total working-age population. In addition, Krasnodar holds the first place in terms of highest average salary - 21,742 rubles per capita.[20]

Tourism comprises a large part of Krasnodar's economy. There are more than 80 hotels in Krasnodar. The Hilton Garden Inn, opened in 2013, is the first world-class hotel in the city.[21] 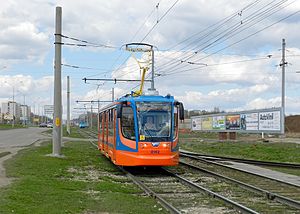 The main airline was Kuban Airlines (at Krasnodar International Airport), but they were closed in 2012 and now the main are Aeroflot and Donavia. The largest hotels in the city include the Intourist, Hotel Moskva, and Hotel Platan. Krasnodar uses a 220 V/50 Hz power supply with two round-pin outlets, like most European countries.

There is also 2 railway stations in Krasnodar: Krasnodar-1 and Krasnodar-2.

In Krasnodar there are 15 gymnasiums, 5 lyceums, 110 schools of general education and 20 specialized schools, as well as 7 non-state lyceums and schools.[22] 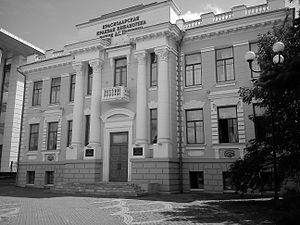 The oldest part of the city is Old Downtown Krasnodar, which consists of many historic buildings, several from the 19th century. Buildings have been preserved, restored or reconstructed, and the district is now a substantial tourist attraction.

There are several major theater venues for Krasnodar:

Krasnodar has several major museums. The Kovalenko Krasnodar Regional Art Museum, the oldest public art museum in the North Caucasus, is one of the finest.

The largest public library of the city is the Pushkin Krasnodar Regional Universal Scientific Library, founded in 1900.

The coat of arms of Yekaterinodar was introduced in 1841 by the Cossack yesaul Ivan Chernik. The royal letter "E" in the middle is for Ekaterina II (Russian for Catherine II). It also depicts the date city was founded, the Imperial double headed eagle (symbolizing Tsar's patronage of Black Sea Cossacks), a bulawa of a Cossack ataman, Yekaterinodar fortress, and flags with letters "E", "P", "A", and "N" standing for Catherine II, Paul I, Alexander I and Nicholas I. Yellow stars around the shield symbolized 59 Black Sea stanitsas around the city.

Under the Köppen climate classification, Krasnodar has a humid subtropical climate (Cfa).

Winters are cold and damp, with unstable snow cover. The average temperature in January, the area's coldest month, is 1 °C (34 °F). Weather conditions in winter vary greatly in the city; temperatures can exceed 20 °C (68 °F) for a few days, but temperatures below −20 °C (−4 °F) are not uncommon for Krasnodar as the city is not protected by mountains from cold waves. Summers are typically hot, with a July average of 24.1 °C (75.4 °F).

February 2, 2015 was beaten by the absolute temperature record for more than 70 years of observations. The air in the capital of the Kuban has warmed up to + 20 degrees Celsius (68 Fahrenheit).

Krasnodar is twinned with: 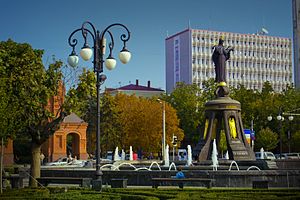