From Infogalactic: the planetary knowledge core
Jump to: navigation, search
Not to be confused with Krasnoyarsk Krai.

Krasnodar Krai (Russian: Краснода́рский край, tr. Krasnodarsky kray; IPA: [krəsnɐˈdarskʲɪj kraj]) is a federal subject of Russia (a krai), located in the Southern Federal District. Its administrative center is the city of Krasnodar. It had a population of 5,226,647 (2010 Census).[9]

The krai is sometimes referred to as Kuban, a term describing a historical region of southern Russia.

Krasnodar Krai is located in the southwestern part of the North Caucasus and borders with Rostov Oblast in the northeast, Stavropol Krai in the east, and with the breakaway republic of Abkhazia (claimed by Georgia) in the south.[14] The Republic of Adygea is completely encircled by the krai territory. The krai's Taman Peninsula is washed by the Sea of Azov in the north and the Black Sea in the south.[15] In the west, the Kerch Strait separates the krai from the Crimean Peninsula.[15] At its widest extent, the krai stretches for 327 kilometers (203 mi) from north to south and for 360 kilometers (220 mi) from east to west.[14]

The krai is split into two distinct parts by the Kuban River, which gave its name to this entire geographic region.[15] The southern, seaward part is the western extremity of the Caucasus range, lying within the Crimean Submediterranean forest complex ecoregion;[16] the climate is Mediterranean or, in the southeast, subtropical.[15] The northern part is a steppe zone which shares continental climate patterns.[15]

The Black Sea coast stretches from the Kerch Strait to Adler and is shielded by Caucasus Mountains from the cold northern winds.[15] Numerous small mountain rivers flow in the coastal areas, often creating picturesque waterfalls.[15]

Lake Abrau, located in the wine-making region of Abrau-Dyurso, is the largest lake in the northeastern Caucasus region.[15] Lake Ritsa is considered to be one of the most picturesque lakes in the region and "the diamond of Caucasus"; it is located in an intermountain basin at the height of 884 meters (2,900 ft) above sea level.[15]

In 631, Kubrat was founded on the Kuban State and the Great Bulgar Khans dynasty began. The Royal city became Phanagoria. The territory of Krasnodar Region from the 8th to the 10th centuries was part of the Khazars. After the defeat of the Khazar Khanate in 965 Kievan prince Svyatoslav conquered the area, it came under the rule of Kievan Rus', and it then formed the Tmutarakan principality. Later, due to the increasing claims of Byzantium at the end of the 11th century, the Tmutarakan principality came under the authority of the Byzantine emperors (until 1204).

In that period of history, Russian Circassians first appeared under the name (ethnonym) Kasogs. For example, Rededi Prince Kasozhsky was mentioned in The Tale of Igor's Campaign.

In 1243-1438 the current territory of the Kuban was part of the Golden Horde. After the collapse of the latter, parts of Kuban were held under the Crimean Khanate, Circassia, and the Ottoman Empire, which dominated the region. The Tsardom of Russia began to challenge the protectorate of the Ottoman Empire in the area during the Russian-Turkish wars.

In April of 1783, by decree of Catherine II, right-bank Kuban and Taman Peninsula were annexed to the Russian Empire. In the years 1792-93 Cossacks moved here from Zaporozhye, now located in Ukraine, and formed the Black Sea Area troops, with the creation of a solid cordon line for the Kuban River and the marginalization of the neighboring Circassians.

During the campaign for control of the North Caucasus (Caucasian war 1763-1864) to Russia in 1829 pushed the Ottoman Empire and the 1830s. Border was marked on the Black Sea coast. For this see Russian conquest of the Caucasus#Black Sea Coast.

In 1783 present northern territory of Kuban region, became part of Russia after the liquidation of the Crimean Khanate. To protect the river Kuban, a border garrison was here in the years 1793-94. The remains were relocated to the Cossacks, initiating development of the region. Administrative region received the status of "Land of Black Sea Cossack Army".

Before the October Revolution of 1917, most of the territory of modern Kuban-Krasnodar territory occupied area, formed in 1860 from the Black Sea Cossack Army, the western part of the Caucasus Line Cossack troops. Kuban region was a territory of the Kuban Cossack Army.

In 1900 the region's population numbered around two million people. In 1913 the gross grain harvest Kuban region entered the 2nd place in Russia, for the production of marketable grain - in the 1st place.

During the Soviet period, the high authority in the Krai was shared between three persons: The first secretary of the Krasnodar CPSU Committee (who in reality had the greatest authority), the chairman of the Krai Soviet (legislative power), and the Chairman of the Krai Executive Committee (executive power). Since 1991, CPSU lost all the power, and the head of the Krai administration, and eventually the governor was appointed/elected alongside elected regional parliament.

The Charter of Krasnodar Krai is the fundamental law of the region. The Legislative Assembly of Krasnodar Krai is the province's standing legislative (representative) body. The Legislative Assembly exercises its authority by passing laws, resolutions, and other legal acts and by supervising the implementation and observance of the laws and other legal acts passed by it. The highest executive body is the Krai Government, which includes territorial executive bodies such as district administrations, committees, and commissions that facilitate development and run the day to day matters of the province. The Krai administration supports the activities of the Governor who is the highest official and acts as guarantor of the observance of the Krai Charter in accordance with the Constitution of Russia.

Krasnodar Krai is administratively divided into thirty-eight districts (raions) and fifteen cities of district equivalence. The districts and cities are further subdivided into eleven towns, plus urban-type settlements, and rural okrugs and stanitsa okrugs. 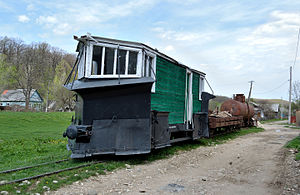 Several lines of Russian Railways cross the region and link it with Abkhasia, Ukraine, and neighboring Russian regions. There are direct trains from resort cities like Sochi and Anapa to Moscow, via Krasnodar, which become very popular during the summer vacation season. There are also suburb train connections. The Apsheronsk narrow-gauge railway, the longest mountain narrow-gauge railway in Russia, runs through Krasnodar Krai.

The biggest ports are Novorossiysk and Tuapse. Others are Eisk and Temryuk on the Azov Sea, and Port Kavkaz, Taman, Anapa, Gelendzhik, and Sochi on the Black Sea. There is a Kerch Strait ferry line which connects Russia and Crimea.

The population of Krasnodar Krai is concentrated in the Kuban River drainage basin, which was traditionally Cossack land (see History of Cossacks). The Kuban Cossacks are now generally considered to be ethnic Russians, even though they are still an important minority in their own right in the area. Other notable ethnic groups are the Adyghe, who have lived in the Kuban area for thousands of years, and the Armenians (including Christian Hamsheni and Cherkesogai), who have lived in the region since at least the 18th century.

Ethnic groups: the 2010 Census identified ethnic groups, as shown in the following table:[9]

According to a 2012 official survey[23] 52.2% of the population of Krasnodar Krai adheres to the Russian Orthodox Church, 3% are unaffiliated generic Christians, 1% are either Orthodox Christian believers who don't belong to church or members of non-Russian Orthodox churches, and 1% are Muslims. In addition, 22% of the population declares to be "spiritual but not religious", 13% is atheist, and 7.8% follows other religions or did not give an answer to the question.[23]

On July 7, 2012, at least 171 people died in Krasnodar Krai, after torrential rains overnight caused the worst flooding and landslides in more than seventy years.[25][26][27] Over 280 millimeters (11 in) of rain – the typical amount for a four- or five-month period – was reported to have fallen within forty-eight hours.[25][27][28] A local police spokesman stated that most of the dead were in Krymsky District, where at least 159 died when a wave of water 5 meters (16 ft) high swept through the town of Krymsk in the middle of the night.[26][27][28] Ten more deaths occurred in Gelendzhik, including five electrocuted when a transformer fell into the floodwater, and two in Novorossiysk.[25][27][28] Authorities stated that 17 people had been officially reported missing, and there were fears the death toll would rise further, while medics had hospitalized 210 people, including 16 children.[27]

The regional government claimed that over 24,000 people were affected by the floods, with more than 3,000 evacuated, and that more than 10,000 rescuers and 140 helicopters were searching for victims and evacuating survivors.[25][27][28] In Krymsk, 14 temporary shelters were set up to house around 2,000 evacuees.[27] The transport system in the region was said to have collapsed, while oil shipments from Novorossiysk were halted when the port, located in the lower part of the city, was threatened by landslides.[25][28][29] Russia's President Vladimir Putin flew to the area to hold emergency talks with officials in Krymsk, while authorities in Perm Krai dispatched a rescue team to evacuate dozens of children from the region, who had been staying at summer camps on the Black Sea coast.[25][27][29]

Residents of Krymsk claimed the wave of water that hit the town resulted from the sluice gates of a nearby reservoir being opened, although this was denied by the prosecutor general's investigative committee. Local prosecutors had earlier confirmed that the gates were opened, but stated that it was too early to determine whether this was the cause of the flooding.[26]