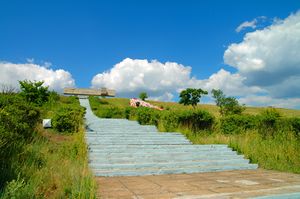 Krasnyi Luch (Ukrainian: Красний Луч, Russian: Красный Луч) is a city in the Luhansk Oblast (province) of south-eastern Ukraine, currently controlled by the Lugansk People's Republic.[1] It is incorporated as a city of oblast significance. Population: 82,765 (2013 est.)[2].

The town was founded as Krindachyovka at the beginning of the 20th century, and renamed as Krasnyi Luch (lit. "red beam") in 1920. The city became one of the most important coal mining centres of the Donets Basin.

On the right is a picture of the Wall of Honor. Such walls were installed in every oblast seat throughout the Soviet Union. With the dissolution of the Soviet state those landmarks were mostly removed, but in some instances were retained as the relics of the past.