From Infogalactic: the planetary knowledge core
Jump to: navigation, search
Kremenchuk is also an alternative spelling for the village of Cremenciug in Moldova

The Dnieper River in Kremenchuk, Ukraine. 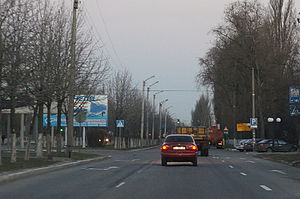 An avenue in Kremenchuk 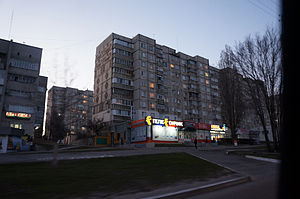 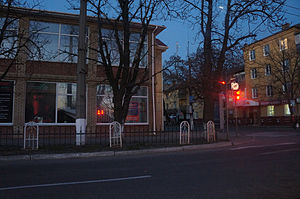 Kremenchuk (Ukrainian: Кременчу́к, Russian: Кременчу́г, translit. Kremenchug), an important industrial city in central Ukraine, stands on the banks of the Dnieper River. Kremenchuk is the administrative center of the Kremenchuk Raion (district) in the Poltava Oblast (province). As of 1 February  2013[update] the city had a population of 225,892 people.

Although smaller than most oblast centers, Kremenchuk has significance as a large industrial center in Ukraine and in Eastern Europe as the base of the KrAZ truck plant, Ukrtatnafta, and of the Kryukov Railway Car Building Works. The latter concern, one of the oldest railway repair and rail-car building factories in Eastern Europe, dates back to 1869.[5]

Kremenchuk was supposedly founded in 1571.[6] The name Kremenchuk is explained as consisting of two words "kremen" - chert (a mineral) because the city is located on a giant chert plate, and "chuk" - from the Ukrainian "chuyu" ("I hear") - a shout of helmsmen in acknowledgement of a warning cry of "Kremen!" sounded whenever their vessels approached the chert rapids while navigating down the Dnieper.[citation needed] An alternative explanation says that "Kremenchuk" is the Turkish for "small fortress".[citation needed]

From its situation at the southern terminus of the navigable course of the Dnieper, and equally advantageous positioning on the crossway from Muscovy to the Black Sea, it acquired a great commercial importance early on, and by 1655, it was a wealthy Cossack town. In 1625, at Lake Kurukove in Kremenchuk, the Treaty of Kurukove was signed between the Cossacks and the Poles.

During World War II (1939-1945), Kremenchuk suffered heavily under Nazi occupation. It was occupied from September 15, 1941 to September 29, 1943. More than 90% of the city's buildings were leveled over the course of the war.[citation needed] 29 September, the day when the city was liberated from the Nazis in 1943, is celebrated in Kremenchuk as the City Day. Despite a remarkable post-war recovery and a healthier economy, Kremenchuk lacks much of the architectural charm and distinctly Ukrainian (rather than Russian) character of its sister city, the oblast capital of Poltava.

During the Cold War, Kremenchuk became the headquarters for the 43rd Rocket Division of the 43rd Army of the Soviet Strategic Rocket Forces.[7] The division was equipped with R-12 Dvina intercontinental ballistic missiles.[dubious – discuss]

Oleh Babayev, the mayor of Kremenchuk was assassinated on July 26, 2014. Oleh Babayev opposed separatism and promoted national unity, prior to becoming mayor he was a member of the Batkivshchyna political party which opposed Victor Yanukovich. His political views and Kremenchuk's large industrial base may have been the motivation for the attack.[8]

During the 2014 pro-Russian unrest in Ukraine security at the Kremenchuk Reservoir was heightened as it was seen as a possible target for saboteurs.[9]

Kremenchuk's Ukrtatnafta oil refinery is the largest in Ukraine and the only one operating since the beginning of the conflict with Russia that left refineries in the Donbass inactive. 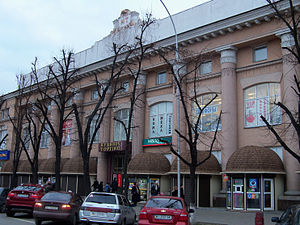 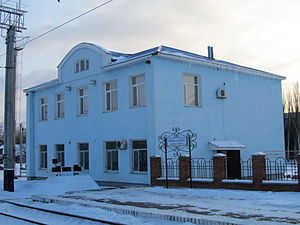 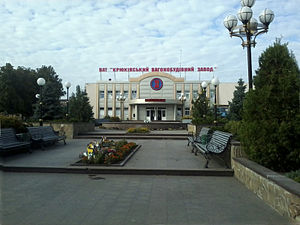 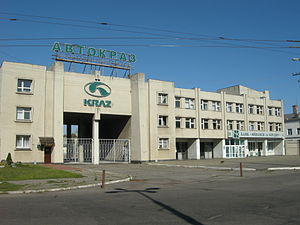 Kremenchuk is the economic center of the Poltava Oblast and one of the leading industrial centers of Ukraine. It contributes about 7% (2005) of the national economy and accounts for more than 50% of the industrial output in the Poltava Oblast. The city is home to KrAZ, a truck-manufacturing company (one of the largest in Eastern Europe) as well as a major European oil refinery operated by Ukrtatnafta, the road-making machine works, Kremenchuk Automobile Assembly Plant, the railcar plant, the wheel plant, the carbon black plant, the steel works and others.

The light industries of the city include tobacco (JTI), confectionery (Roshen), a knitting factory as well as milk and meat processing plants.

Kremenchuk is one of the most important railway junctions in Central Ukraine (thanks to its geographical position and a bridge over the River Dnieper) and a major river port on the main river of Ukraine.

Kremenchuk is home to HK Kremenchuk ice hockey team who compete in the Ukrainian Championship and the FC "Kremin" football club.[10][11]

Kremenchuk is twinned with 13 cities:[13]