The former badge of a Kriminalpolizei investigator.

The equivalent division of the Norwegian Police is known as Kripos, derived from a similar acronym in Norwegian.

In 1799, six police officers were assigned to the Prussian Kammergericht (superior court of justice) in Berlin to investigate more prominent crimes. They were given permission to work in plainclothes, when necessary. Their number increased in the following years.

In 1811, their rules of service were written into the Berliner Polizeireglement (Berlin Police Regulations) and in 1820 the rank of Kriminalkommissar was introduced for criminal investigators. In 1872 the new Kriminalpolizei was made a separate branch of police service distinguishing it from the uniformed police called Schutzpolizei.

Based on the experience with this new kind of police force, other German states—such as Bremen in 1852—reformed their police forces and by the end of the nineteenth century the Kriminalpolizei had been established nationwide.

During the early part of the 20th century and post-World War I, the Kripo continued to serve as the German state's investigative agency for all criminal activity. However, when Adolf Hitler assumed power in 1933, the Kriminalpolizei would be subordinated to the SS.[1]

After Adolf Hitler took office in January 1933, the Nazis began a programme of "coordination" of all aspects of German life, in order to consolidate the Nazi Party's hold on power.[3] In July 1936, the Prussian central criminal investigation department (Landeskriminalpolizeiamt) became the central criminal investigation department for Germany, the Reichskriminalpolizeiamt. It was merged, along with the secret state police, the Geheime Staatspolizei or Gestapo into the Sicherheitspolizei (SiPo) which had a central command office known as the Hauptamt Sicherheitspolizei.[4] At that point, Reinhard Heydrich was in overall command of the SiPo, its central command office, the Hauptamt Sicherheitspolizei and the Sicherheitsdienst (SD).[4][5] Nebe was appointed head of the Reichskriminalpolizeiamt, and reported to Heydrich.[1]

In September 1939, the Reichssicherheitshauptamt (Reich Main Security Office; RSHA) was created as the command organization for the various state investigation and security agencies.[1] The Hauptamt Sicherheitspolizei was officially abolished and its departments were folded into the RSHA. The Reichskriminalpolizeiamt became Amt V (Department 5), the Kriminalpolizei (Criminal Police) in the RSHA.[6] It was commanded by Arthur Nebe until 1944, when he was denounced and executed subsequent to the failed 20 July plot to kill Hitler. In the last year of its existence, Amt V was commanded by Friedrich Panzinger who answered directly to Ernst Kaltenbrunner, the head of the RSHA after Heydrich's assassination in 1942.[6]

The Kriminalpolizei were mostly plain-clothes detectives, worked in conjunction with the Ordnungspolizei, the uniformed branch of the police and other agencies such as the Geheime Feldpolizei. The policy directives came from the SS-Hauptamt. The Kripo was organized in a hierarchical system, with central offices in all towns and smaller cities. These, in turn, answered to headquarters offices in the larger German cities which answered to the Central Office of the Kriminalpolizei, a department of the RSHA.

The Kriminalpolizei was mainly concerned with serious crimes such as rape, murder and arson. A main area of the group's focus was also on "blackout burglary," considered a serious problem during bombing raids when criminals would raid abandoned homes, shops and factories for any available valuables. The Kripo was also one of the sources of manpower used to fill the ranks of the Einsatzgruppen and several senior Kripo commanders, Arthur Nebe among them, were assigned as Einsatzgruppen commanders. 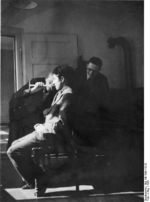 As part of the Nazi doctrines on crime and race, the Rassenhygienische und Bevolkerungsbiologische Forschungsstelle (English: Racial Hygiene and Demographic Biology Research Unit) headed by Nazi psychiatrist Dr. Robert Ritter, was attached to the Kriminalpolizei. Its role was to create racial profiles of non-aryans, in particular, Roma. Both the Gestapo and the Kripo deferred their policies and guidelines to the Criminal Biological department on how to deal with Gypsies.[7] The Kripo aided in the round ups of Roma and their deportations to concentration camps and extermination camps.

In 1945, the occupying Allied Powers began their own programme of de-Nazification. It was understood that, in a totalitarian state, few people could participate in public service without being simultaneously members of the Nazi Party. Party membership alone was not viewed as sufficient grounds for dismissal, but allegations of involvement or complicity in Nazi war crimes or crimes against humanity were investigated and any police official convicted was sentenced in the usual way.

However the Allied Powers felt the rule of law would be jeopardised by the mass-sacking of police officials who had served the Nazi state and that maintaining the continuity of a civilian and indigenous police force from the outset, together with all its accumulated practical skills and experience, was the most efficient way of restoring democracy to the German people. Thus the Kriminalpolizei adapted once more to the changes in oversight and accountability and, as with other public servants, took the political and economic change of the post-war years in its stride.

The Federal Republic of Germany divides police responsibilities between federal and state authorities. The state police or Landespolizei of the federal states perform the majority of investigations in Germany.

Kriminalpolizei detectives investigate crimes and incidents and work in plainclothes. They collect evidence, interview victims and witnesses and question suspects. Detectives are also involved in the location of missing persons and the recovery of stolen property. Investigators may be assigned to precinct detective squads or one of dozens of specialized investigative units that have borough, citywide or regional jurisdiction.

Kripo candidates are mostly regular state police officers who have done well in police school and in their first years of street duty. After rigorous screening and examination, a small number are chosen to receive a technical education in criminology at a police college. Those completing the course then serve a three-year apprenticeship before attaining full status as an investigator.

Joint investigation teams are often formed with German Federal Police and customs investigators to combat drug smuggling or organised crime activities. Each state also has a state investigation bureau or Landeskriminalamt, generally located in the state capital, to assist the Kripo in cases that require specialist forensic or investigative resources.

German police departments have separate Staatsschutz departments within the Kripo to investigate politically motivated crime. German intelligence agencies have no executive police powers. Their operatives are not authorized to carry out arrests, searches of premises, interrogations or confiscations. If they establish that judicial or police measures are required, they hand the matter over to the courts, public prosecutors or Kripo state security (Staatsschutz) officers who decide independently what action is justified.

The Bundeskriminalamt, the German Federal Investigation Bureau, and the federal police, Bundespolizei, have their own investigators but these are not referred to as Kriminalpolizei. It is technically possible to transfer from the federal police to the Kripo, but in practice there is little demand for this.

The responsibility for law and order in Switzerland basically lies with the cantons where the cantonal police (Kantonspolizei) are responsible for investigations.[8] The Swiss federal structure is reflected in a number of cantonal police services which are organized in different ways, but in the German-speaking cantons, the criminal investigation departments are generally known as Kriminalpolizei.