Swami Krishnananda Saraswati (25 April 1922 – 23 November 2001) was a disciple of Sivananda Saraswati and served as the General Secretary of the Divine Life Society in Rishikesh, India from 1958 until 2001. Author of more than 40 texts, and lecturing extensively, on yoga, religion, and metaphysics, Krishnananda was a prolific theologian, saint, yogi and philosopher.

Subbaraya, rechristened Swami Krishnananda by his mentor Swami Sivananda Saraswati, was born on 25 April 1922 into an orthodox Madhva family. He learnt Sanskrit at an early age and took to reading and memorising Sanskrit works. His understanding of Hindu scriptures predisposed him towards Advaita philosophy. He yearned for spiritual learning and renunciation, however, his father persuaded him into accepting a government job at Hospet Government Training School in Bellary in 1943. He fell ill there and returned home. In 1944, he left his home to visit Sivananda Ashram in Rishikesh. He worked as an editor in the Ashram and in 1948, on Sivananda’s request, he wrote his first book Realisation of the Absolute.[1]

In 1961, he became the general secretary of Divine Life Society. He spent his life in the Ashram giving lectures and writing over 40 books on philosophy, Hindu scriptures, yoga, meditation, mysticism and poetry till his death on 23 November 2001.

Swami Krishnananda valued and was a scholar of Western philosophy and was also an exponent of Advaita Vedanta philosophy, the most influential[2] sub-school of Vedanta.[citation needed] 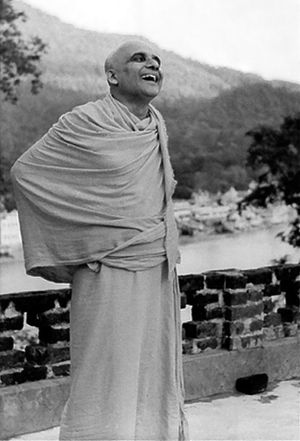