Krugersdorp (Afrikaans for Kruger's town) is a mining city in the West Rand, Gauteng Province, South Africa founded in 1887 by Marthinus Pretorius. Following the discovery of gold on the Witwatersrand, a need arose for a major town in the west of the reef. The government bought part of the Paardekraal farm and named the new town after the Transvaal president, Paul Kruger. Krugersdorp no longer has a separate municipal government after it was integrated into Mogale City Local Municipality along with surrounding towns. It is now the seat of government for Mogale City. 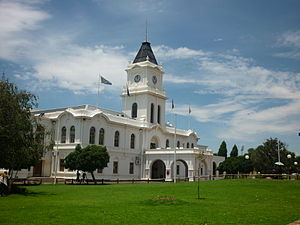 Krugersdorp is the site of a December 1880 gathering at which more than 6,000 men vowed to fight for the Transvaal's independence. Founded in 1887 by Marthinus Pretorius after the discovery of gold on his farm, Paardekraal, thereafter the mining industry played an important role in the development of the city. Two important events in the history of South Africa: the Transvaal War of Independence (1881) and the discovery of the Witwatersrand Goldfields (1886) took place in Krugersdorp. These events had far-reaching political and economic consequences for the country's development.

By the time the town was founded, the existence of the gold reef along the Witwatersrand had become common knowledge, and thousands seeking their fortunes pitched their tents and pegged claims. In 1888, Krugersdorp was proclaimed a separate gold field.

During the Anglo Boer War the British built a concentration camp in the valley that is now occupied by the Centenary Dam. This camp was overlooked by the "D" Shaft of the Luipardsvlei Estate Gold Mining Company, which was shut down in around 1929 when mining shifted to deeper ore bodies that offered the prospect of larger tonnages. As of 2014[update] this shaft is being brought back into production. Part of the heritage of the area will feature in a museum to be built post-closure. An essential part of the museum's content will be the Boer War legacy.

In 1952, the West Rand Consolidated Mine was the first in the world to extract uranium as a byproduct of the gold refining process.

Gold, manganese, iron, asbestos and lime are all mined in the area.

Krugersdorp has a modern business center and shopping malls alongside many smaller shops, schools, and necessary amenities. There are also game reserves and a nearby bird sanctuary.

The nearby 1,400 hectares (3,500 acres) game reserve in the dense bush of the veld holds a large quantity of game and is one of the town's major tourist attractions. Also in close proximity are various provincial heritage sites including the Cradle of Humankind and its Sterkfontein Caves and the Wonder Cave.

Krugersdorp is home to the South African Branch of Jehovah's Witnesses (The Watchtower Bible and Tract Society).

In 2010, the town's Coronation Park area received international exposure for the depiction of Afrikaner poverty by Finbarr O'Reilly.[2][3][4] In 2014 the area was exposed again as a subject of the BBC documentary Reggie Yates' Extreme South Africa: White Slums.[5]

Krugersdorp is home to some of the best schools in Gauteng.[citation needed]

The town is the host of the annual Gauteng Beach Party held at Coronation Park. In recent years the event has featured performances by:

Krugersdorp also has an 18-hole golf course and many facilities for extreme sports.

Krugersdorp was proclaimed a municipality in 1903. By 1931, the municipal council had assumed a pseudo-heraldic coat of arms. The shield was divided by a horizontal line, the upper half subdivided by a vertical line, the three sections depicting (1) the Paardekraal monument, (2) a mining landscape, and (3) a plough. The motto was Labor omnia vincit improbus.[9]

A proper coat of arms was designed in the 1960s. It was registered with the Transvaal Provincial Administration in November 1965[10] and at the Bureau of Heraldry in January 1969.[11]

The arms were : Per chevron ploye Azure and Or, dexter two mine hammers in saltire and sinister a cogwheel all Or, and in base the Paardekraal Monument Gules. In layman's terms, the shield was divided by a curved chevron-shaped line into blue and gold, displaying two crossed mine hammers and a cogwheel at the top, and the Paardekraal monument at the bottom.

The crest was three horses' heads issuing from a golden mural crown; the supporters were an eland and a gemsbok; and the motto was Labor omnia vincit improbus.