From Infogalactic: the planetary knowledge core
(Redirected from Kryvorizhstal)
Jump to: navigation, search

Bought in 2005 by Mittal Steel, the company is one of the most important businesses in Ukraine and a globally important steel producer. It is the largest steel manufacturer in Ukraine and largest manufacturer of both reinforcing bar and wire rod in the former Soviet Union. The company also produces processed iron ore concentrates for both own use and market.

Located fully in Kryvyi Rih, Kryvorizhstal is the largest and most up-to-date steel company in the Kryvbas region (as well as in the whole Ukraine). It was built as an integrated mining and metallurgy plant (Ukrainian: комбінат, kombinat), comprising: 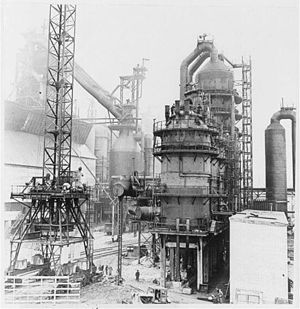 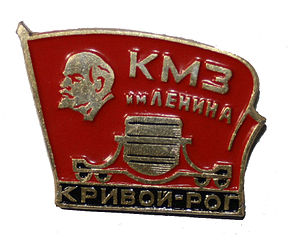 The presence of iron ore in the regions around Kryvyi Rih has been known since at least 1781 and was rumoured before;[1] being known to the ancients.[9] Throughout the 1800s the region was investigated for its mineral wealth. Iron ore of 70% iron content and manganese ores were found. In 1881 the industrial extraction of iron ore from the near region began, alongside other developments such as the construction of the Kryvyi Rih railway. By 1884 over 100,000 tons of iron ore had been extracted, and the railway though Kryvyi Rih (the Yekateryninska railway), 477 versts (505,6 km) long, from Yasynuvata station via Kryvyi Rih to Dolynska station had been opened.[1] The production expanded rapidly in the next years, as it did in other industrialized regions and countries. By 1896 there were 20 mines producing over 1,000,000 tonnes of ore in the Kryvyi Rih Basin, and the population had exploded though the toll on the health of the working men had begun to be noticed.[1] Industrial expansion continued in the region up to 1917. Production dropped during the first world war due to lack of labour.[1]

Foundation and growth in Soviet Union

After the formation of the Soviet Union and the expulsion of Austro-Hungarian forces and then anti-communist forces under Anton Denikin occupying the region relative normalcy was resumed.[1] Planning for the plant began in 1929, with the intention being to produce an integrated steel plant taking iron ore and carbon all the way to finished steel products.[10] In 1931 the chairman of the Supreme Economic Council of the USSR - Grigori (Sergo) Ordzhonikidze signed a decree ordering its construction[2] and the same year the foundation stone of the metallurgical works was laid, workers included prison labourers, and initially German and Americans as well. In August 1934 the first metal was produced at Kryvorizhstal;[1] then known as 'Kryvyi Rih Metallurgical Works' (криворожский металлургический комбинат)[2]

Prior to occupation by German military forces equipment and workers were evacuated to Nizhny Tagil.[11] During the German administration (from the 14th of August 1941 to the 22nd of February 1944[1]), the plant was destroyed.,[12] 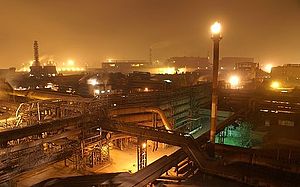 General view of the modern plant

In 2004 the organisation became a public company and was privatised.[13]

Kryvorizhstal became internationally known when it was privatized in June 2004 for a sum of US $800 million,[16][17] (4.26 billion Hryvnia.[18]) against a government-set reserve price of $714 million,[19] to a consortium called Investment-Metallurgical Union. This consortium included Rinat Akhmetov's SCM and Interpipe Group,[18] controlled by then-President Kuchma's son-in-law Viktor Pinchuk.[17] Higher offers from foreign investors including a joint bid from Severstal/Arcelor, and a bid from Tata Steel were rejected on bidding technicalities.[20] The deal was widely criticized by the opposition and abroad as an example of corruption and state property mismanagement.[17]

By initiative of the new President Viktor Yushchenko, the privatization deal was dismissed by the court in June 2005, in order to sell the company again in a fair auction.[17]

At the time of the second privatisation the company had yearly sales of $1897 million with a net profit of $378 million, and cash of $413 million; the plant had a production capacity of ~10 million tonnes of raw steel, and rolling capacity for under 7 million tonnes, and was able to source most of its requirements for iron ore and coke locally.[21] The bidding process was broadcast live on Ukrainian television,[17] with Arcelor, Mittal Steel and Vadim Novinsky's Smart Holdings bidding - Mittal Steel was the highest bidder and acquired a 93.02 percent stake in Kryvorizhstal on October 24, 2005, for 24.2 billion Hryvnia (US$4.81 billion)[17] - Mittal Steel was expected to finance the acquisition from its own cash reserves and from a $3 billion loan arranged with UK based Citigroup. The price exceeded analyst predictions of $3 billion,[21] making it the largest privatization deal in the former Soviet Union.[citation needed]

However, there were some conditional commitments for sale the agreement that had to be fulfilled by Mittal Steel, such as technical and environmental improvements to the installation (upgrading the coking plants and desulfurisation), as well as social improvements (the allocation of funds to improve social and living conditions of workers at 0.5% of the sum of the sold products per year).[24] On 14 July 2008, the Ukrainian Property Fund has sent the Ukrainian government a letter informing it about several investment commitments that were not fulfilled in 2007 by Mittal Steel Germany GmbH and asks the International Arbitrary Court at the Commercial Chamber of Ukraine[25] to decide on the annulment of this agreement.[24][26][27] In May 2009 an amendment to the original contract was signed allowing temporary delays to agreed contractual investments under force majeure circumstances.[28] The case was dropped in October 2010 by the government prosecutor.[29] The temporary force majeure exemption clause was terminated in October 2011.[30]

In June 2010 the installation began of the first continuous casting machine at the plant.[36] Siemens VAI supplied the six strand billet caster which is expected to have a production capacity of over 1.2 million tonnes p.a. of 150mm x 150mm billets.[37][38]

By 2011 staffing levels had been reduced from 55,000 (at acquisition) to 37,000, high by global standards - the management hoped to reduce the number of workers to approximately 15,000 over a decade to increase competitiveness.[39]