Krzysztof Kamil Baczyński, (Polish pronunciation: [ˈkʂɨʂtɔf ˈkamil baˈt͡ʂɨɲskʲi]; nom de guerre: Jan Bugaj; January 22, 1921 – August 4, 1944) was a Polish poet and Home Army soldier, one of the most renowned authors of the Generation of Columbuses, the young generation of Polish poets of whom many perished in the Warsaw Uprising. 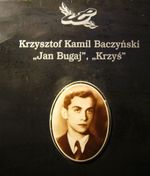 Baczyński was born in Warsaw in the family of renowned literary critic and soldier of Polish Legions in World War I, Stanisław Baczyński and school teacher Stefania Zieleńczyk. His mother was a zealous Catholic but with Jewish roots, and as such was treated by the Germans as a Jew. His uncle, Dr. Adam Zieleńczyk, escaped from the Warsaw Ghetto and was killed by Germans in 1943.[1]

Baczynski was baptized on September 7, 1922 in Warsaw. As a child, he suffered from asthma, his heart was very weak and he was in constant threat of tuberculosis. In 1933, he began education at Gimnazjum i Liceum im. Stefana Batorego, he graduated in May 1939. In his class there were future heroes of Szare Szeregi - Jan Bytnar (Rudy) and Tadeusz Zawadzki (Zośka). Baczynski debuted as a poet some time in 1938 in Strzała - a magazine published by Organization of Socialist Youth Spartakus, to which he belonged himself. After graduation, he was planning to continue education at Warsaw's Academy of Fine Arts, but the outbreak of World War II ended these plans.

During the German and Soviet (until 1941) occupation of Poland, he continued to cooperate with the left-wing underground press, most notably with the "Płomienie" (Flames) and "Droga" (Way) magazines. At the same time he was a student of Polish language at the secret underground Warsaw University and the Armia Krajowa's "Agricola" NCOs School. He took up several jobs, and in 1943 joined Batalion Zośka, after which he gave up studies, committing himself to the Polish resistance activities. In his apartment, he hid several pieces of weaponry, including submachine guns and grenades.

On July 6, 1942, he married Barbara Drapczyńska, a university colleague. The marriage resulted in a set of erotica written by Baczyński, reputedly one of the most notable in the Polish language. Shortly before the Warsaw Uprising Baczyński gave a copy of all his poems to one of his friends, to hide in Żoliborz. Because of that, they survived the war.

As a member of Scouting Assault Groups (Harcerskie Grupy Szturmowe), Baczyński took part in many sabotage actions throughout the occupation. One of them was derailment of a German military train in August 1944, which resulted in a 26-hour delay of traffic on the strategic connection Warsaw-Białystok.

After the Warsaw Uprising broke out, he joined the "Parasol" battalion. He was killed in action by a German sniper at approximately 4 pm of August 4, 1944, in Blank Palace (Pałac Blanka) in the Warsaw Old Town area. He is buried in the Powązki Military Cemetery, together with his pregnant wife, who was killed on September 1, 1944. He was posthumously awarded the Armia Krajowa Cross in 1947[the award founded in 1966?].

In his poems and short novels, Baczyński demonstrated both romantic traditions and catastrophism. His poems depict the brutality of war, and suggest that love is the only force that can effectively defend a human being against it. His talent was highly appreciated by his contemporaries, Stanisław Pigon, upon hearing news of Baczynski joining the Szare Szeregi, said to Kazimierz Wyka: We belong to a nation, whose fate is to shoot at the enemy with diamonds.