From Infogalactic: the planetary knowledge core
Jump to: navigation, search
This name uses Eastern Slavic naming customs; the patronymic is Aleksandrovna and the family name is Rappoport.

Kseniya Aleksandrovna Rappoport (Russian: Ксе́ния Алекса́ндровна Раппопо́рт; born 25 March 1974) is a Russian actress. She graduated in 2000 from Saint Petersburg Academy of Theatrical Arts and was immediately invited to join the Maly Drama Theatre. She played Nina Zarechnaya in The Seagull, Elena in Uncle Vania, and Sonia in La doppia ora.

She has appeared in films and TV series such as Streets of Broken Streetlights, Baron, Anna Karenina, Nicholas II (Germany), The Russian Bride, National Security Agent, Empire Under Fire, Calendula Flowers, Prokofiev (Germany), Get Thee From Me, Criminal Petersburg, Homicide, and I Pay Up Front and My Wife's Romance. She starred in the Italian film La sconosciuta (2006), L'uomo che ama (2008) and in the Golden Lion nominated movie La doppia ora (2009), for which she won Volpi Cup for Best Actress at the 66th Venice Film Festival.[1]

Kseniya Rappoport was born in Leningrad, Russian SFSR, Soviet Union. She studied at the school № 155 with in-depth study of French, studied music and sports, and in high school was fond of puppet theater.

She made her debut in cinema at the age of 16 years, while the decision to become an actress Kseniya influenced shooting the film "Get Thee Out"

In 2000 she graduated from Saint Petersburg State Theatre Arts Academy (SPbGATI), where she studied in the class VM Filshtinsky and was immediately invited to join the group stazhёrskuyu St. Petersburg Maly Drama Theater, an actress who is at the moment. Xenia played Nina Zarechnaya in "The Seagull" A. Chekhov set Lev Dodin in 2001. The actress also plays a girl in "Claustrophobia" (MDT), Elena Andreyevna in "Uncle Vanya" (Prize "Gold spotlights" in 2003 for Best Actress) and Sofia in "Play Without name" directed by Lev Dodin in MDT, Jocasta in the play "Oedipus Rex", Beatrice in "The Servant of Two Masters" and Ismenio in "Antigone" (State Theatre on Foundry). 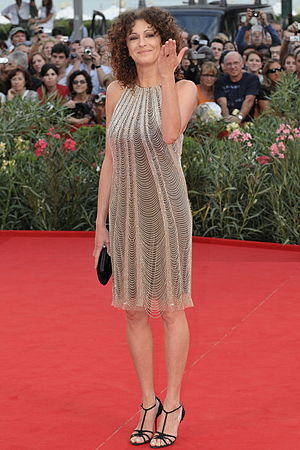 Kseniya Rappoport in the Venice Film Festival on September 2009.

December 2009, Rappoport was awarded the title Honored Artist of the Russian Federation.

June 27, 2012, at the 58th International Film Festival in Taormina (Sicily, Italy) Rappoport awarded the prize "Golden Lion", founded by the Province of Messina.

At the 35th Moscow International Film Festival awarded a special prize "For conquest of tops of actor's skill and loyalty to the principles of Stanislavsky school".

In 2013, in the category "Skill actor" (Best Actress) awarded the International Prize of Stanislavsky (2012-2013 theater season) for the role of Lady Milford in the play "Intrigue and Love" directed by Lev Dodin (MDT Theater of Europe). In 2014 he became the winner of "Top 50 Most famous people of St. Petersburg" in the "theater" for active work in the Board of Trustees "Children Bella" and the role of Ranevskaya in "The Cherry Orchard" by Lev Dodin.

Rappoport's father was Jewish, and she has stated that she never hid her Jewish ethnicity.[2][3]

Rappoport was married to Russian businessman Victor Tarasov (divorced). Their daughter is actress Darya Victorovna "Aglaya" Tarasova, born 1994 in Saint Petersburg. She is now married to Russian actor Yuri Kolokolnikov, and they have a daughter Sofia, born January 2011.