The Kuban Oblast (Russian: Куба́нская о́бласть Kubanskaja oblast′; Ukrainian: Кубанська область Kubans′ka oblast′) was an oblast (province) of the Russian Empire. It roughly corresponded to most of the Kuban and Circassia regions. It was created in 1860 out of Kuban Cossack territories that had once been part of the Crimean Khanate and the land of the Circassians. It was dissolved upon the assumption of supreme authority by the Kuban Rada in 1917 and the independence of the Kuban People's Republic in 1918.

The militarized nature of the Kuban meant that, rather than a traditional imperial guberniya (governorate) with uyezds (districts), the territory was administered by the Kuban Cossacks as an oblast which was split into otdels (regions [отдел], of which there were seven in 1888). Each otdel would have its own sotnias which in turn would be split into stanitsas and khutors. The ataman (commander) for each region was not only responsible for the military preparation of the Cossacks, but for the local administration duties. Local stanitsa and khutor atamans were elected, but approved by the atamans of the otdel. These, in turn, were appointed by the supreme ataman of the Kuban host, who was in turn appointed directly by the Russian emperor. Prior to 1870, this system of legislature in the oblast remained a robust military one and all legal decisions were carried out by the stanitsa ataman and two elected judges. Afterwards, however, the system was bureaucratized and the judicial functions were independent of the stanitsas.

In 1897, 1,918,881 people inhabited the oblast. Ukrainians constituted the plurality of the population with Russians and several much smaller minorities making up the remainder. The total Slavic population was 1,742,162 (90.8%). 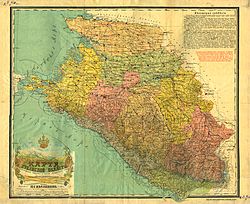