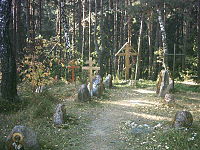 Kurapaty (Belarusian: Курапаты) is a wooded area on the outskirts of Minsk, Belarus, in which a vast number of people were executed between 1937 and 1941 during the Great Purge by the Soviet secret police, the NKVD.

In 2004 Kurapaty were included in the register of the Cultural Properties of Belarus as a first-category cultural heritage.[8]

The discovery by historian Zyanon Paznyak and exhumation of the remains in 1988 gave an added momentum to the pro-democracy and pro-independence movement in Belarus in the last years of the Soviet Union before it dissolved. There have been investigations by both the Soviet, and Belarusian governments, which have been inconclusive as to the perpetrators who are believed to be either the Soviet NKVD, or the invading German forces in 1941.In the Book 'Kurapaty The Road of Death' it is claimed after heavy research that the German army never entered the site and therefore never killed there. This is based on former NKVD members confession and the eyewitness testimonies of 55 villagers, from villages such as Cna, Cna-Yodkava, Drazdova, Padbaloccie and others, that gave evidence that NKVD brought people in trucks and executed them during 1937 – 1941.

President of the United States Bill Clinton visited Kurapaty forest in 1994, when he came to Belarus with a "thank you" visit after Belarus agreed to transfer their post-Soviet nuclear weapons to Russia. Clinton presented a small granite monument "To Belarusians from the American people", perhaps the first post-Soviet cultural artefact from the U.S. on the Belarusian soil. The monument was damaged three times by unidentified vandals, but subsequently restored.

In 2001, when the Kurapaty site was threatened by a planned widening of the Minsk Ring Road, youth from the Belarusian Popular Front, Zubr and smaller organizations occupied the site and sat out a bitter winter in tents.

On October 29, 2004, the Jewish community of Belarus installed a monument in memory of the Jews and other nationals who were murdered in Kurapaty forest. The brown granite stone has two inscriptions in Yiddish and in Belarusian: "To our fellow-believers—Jews, Christians and the Muslims—the victims of Stalinism from the Belarusian Jews."

Each year in November, on Dziady (the All Saints or the day when Belarusians commemorate their deceased forefathers), hundreds of people visit this site of crimes of Soviet political repression. The first such demonstration in 1988, in which there were tens of thousands of participants, was brutally dispersed by the police. Officials from the administration of Alexander Lukashenko do not recognize the Kurapaty case as a certain Soviet crime against humanity and never mention Kurapaty in public.