From Infogalactic: the planetary knowledge core
Jump to: navigation, search
For other uses, see Kurgan (disambiguation). 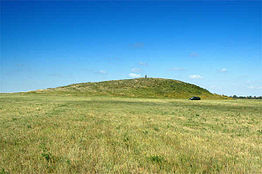 Sarmatian Kurgan 4th century BC, Fillipovka, South Urals, Russia. This kurgan was excavated in a dig led by Russian Academy of Sciences Archeology Institute Prof. L. Yablonsky in the summer of 2006. It is the first kurgan known to be completely destroyed and then rebuilt to its original appearance.

A kurgan (Russian: курга́н) is a tumulus, a type of burial mound or barrow, heaped over a burial chamber, often of wood.[1] The Russian noun, which is already attested in Old East Slavic, is borrowed from an unidentified Turkic language,[2] compare Modern Turkish kurğan, which means "fortress". These are mounds of earth and stones raised over a grave or graves. Associated with its use in Soviet archaeology, the word is now widely used for tumuli in the context of Eastern European and Central Asian archaeology.

The earliest kurgans date to the 4th millennium BC in the Caucasus,[3] and are associated with the Indo-Europeans.[4] Kurgans were built in the Eneolithic, Bronze, Iron, Antiquity and Middle Ages, with ancient traditions still active in Southern Siberia and Central Asia. Kurgan cultures are divided archeologically into different sub-cultures, such as Timber Grave, Pit Grave, Scythian, Sarmatian, Hunnish and Kuman-Kipchak.

A plethora of placenames that include the word "kurgan" are located from Lake Baikal to the Black Sea.

The earliest known kurgans are dated to the 4th millennium BC in the Caucasus.[3] Kurgan barrows were characteristic of Bronze Age peoples, and have been found from the Altay Mountains to the Caucasus, Ukraine, Romania, and Bulgaria. Kurgans were used in the Ukrainian and Russian steppes, their use spreading with migration into eastern, central, and northern Europe in the 3rd millennium BC.

The Kurgan hypothesis postulates that the Proto-Indo-Europeans were the bearers of the Kurgan culture of the Black Sea and the Caucasus and west of the Urals. The hypothesis was introduced by Marija Gimbutas in 1956, combining kurgan archaeology with linguistics to locate the origins of the Proto-Indo-European (PIE)-speaking peoples. She tentatively named the culture "Kurgan" after their distinctive burial mounds and traced its diffusion into Europe. This hypothesis has had a significant impact on Indo-European studies.[note 1]

Those scholars who follow Gimbutas identify a "Kurgan culture" as reflecting an early Indo-European ethnicity, which existed in the steppes and southeastern Europe from the 5th to 3rd millennia BC. In Kurgan cultures, most of the burials were in kurgans, either clan kurgans or individual ones. Most prominent leaders were buried in individual kurgans, now called "Royal kurgans." More elaborate than clan kurgans and containing grave goods, the elite examples have attracted the greatest attention and publicity.

The monuments of these cultures coincide with Scythian-Saka-Siberian monuments. Scythian-Saka-Siberian monuments have common features, and sometimes common genetic roots.[5] Also associated with these spectacular burial mounds are the Pazyryk, an ancient people who lived in the Altai Mountains lying in Siberian Russia on the Ukok Plateau, near the borders with China, Kazakhstan and Mongolia.[6] The archaeological site on the Ukok Plateau associated with the Pazyryk culture is included in the Golden Mountains of Altai UNESCO World Heritage Site.[7] 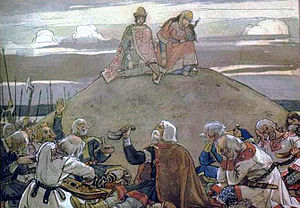 Oleg being mourned by his warriors, an 1899 painting by Viktor Vasnetsov. This burial rite, with the funerary tumulus, is typical of both Scandinavian and Eurasian nomadic customs.

The tradition of kurgan burials was adopted by some neighboring peoples who did not have such a tradition. Various Thracian kings and chieftains were buried in elaborate mound tombs found in modern Bulgaria; Philip II of Macedon, the father of Alexander the Great, was buried in a magnificent kurgan in present Greece; and Midas, a king of ancient Phrygia, was buried in a kurgan near his ancient capital of Gordion.[8]

Burial mounds are complex structures with internal chambers. Within the burial chamber at the heart of the kurgan, elite individuals were buried with grave goods and sacrificial offerings, sometimes including horses and chariots. The structures of the earlier Neolithic period from the 4th to the 3rd millenniums BC, and Bronze Age until the 1st millennium BC, display continuity of the archaic forming methods. They were inspired by common ritual-mythological ideas. 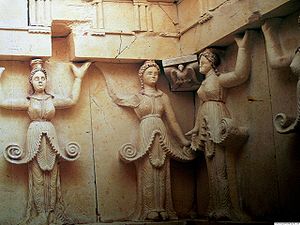 Inside view of the Thracian mound tomb at Sveshtari, Bulgaria

In all periods, the development of the kurgan structure tradition in the various ethnocultural zones is revealed by common components or typical features in the construction of the monuments. They include:

Depending on the combination of these elements, each historical and cultural nomadic zone has certain architectural distinctions.

In the Bronze Age, kurgans were built with stone reinforcements. Some of them are believed to be Scythian burials with built-up soil, and embankments reinforced with stone (Olhovsky, 1991).

Pre-Scythian-Saka-Sibirian kurgans were surface kurgans. Underground wooden or stone tombs were constructed on the surface or underground and then covered with a kurgan. The kurgans of Bronze culture across Europe and Asia were similar to housing; the methods of house construction were applied to the construction of the tombs.[9] Kurgan Ak-su - Aüly (12th–11th centuries BC) with a tomb covered by a pyramidal timber roof under a kurgan has space surrounded by double walls serving as a bypass corridor. This design has analogies with Begazy, Sanguyr, Begasar, and Dandybay kurgans.[9] These building traditions survived into the early Middle Ages, to the 8th-10th centuries AD.

The Bronze Pre-Scythian-Saka-Sibirian culture developed in close similarity with the cultures of Yenisei, Altai, Kazakhstan, southern, and southeast Amur regions. In the 2nd millennium BC appeared so-called "kurgans-maidans". On a prepared platform were installed earthen images of a swan, a turtle, a snake, or other image, with and without burials. Similar structures have been found in Ukraine, India and South America.[citation needed]

Some kurgans had facing or tiling. One tomb in Ukraine has 29 large limestone slabs set on end in a circle underground. They were decorated with carved geometrical ornamentation of rhombuses, triangles, crosses, and on one slab, figures of people. Another example has an earthen kurgan under a wooden cone of thick logs topped by an ornamented cornice up to 2 m in height. 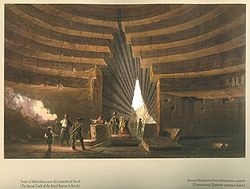 Coloured lithograph by Carlo Bossoli (London, 1856)[10] of the so-called "Tomb of Mithridates", kurgan near Kerch

The Scythian-Saka-Sibirian kurgans in the Early Iron Age are notable for their grandiose mounds throughout the Eurasian continent. The base diameters of the kurgans reach 500 m (1,600 ft) in Siberia[citation needed] (Great Salbyk kurgan (Lua error in Module:Coordinates at line 668: callParserFunction: function "#coordinates" was not found.[11][12]) of the settled Tagar culture); in neighboring China they reach 5,000 m (16,000 ft)[citation needed] (kurgan of the first emperor of China in the 3rd century BC near Sian) (Mason, 1997: 71). Kurgans could be extremely tall: the Great Salbyk kurgan is 22–27 m (72–89 ft)[citation needed] (the height of a 7-story building); the kurgan of the Chinese emperor is over 100 m (330 ft)[citation needed]. The presence of such structures in Siberia testifies to a high standard of living and a developed construction culture of the nomads.

Females were buried in about 20% of graves of the lower and middle Volga river region during the Yamna and Poltavka cultures.[13] Two thousand years later, females dressed as warriors were buried in the same region. David Anthony notes, "About 20% of Scythian-Sarmatian "warrior graves" on the lower Don and lower Volga contained females dressed for battle as if they were men, a phenomenon that probably inspired the Greek tales about the Amazons."[13] A near-equal ratio of male-to-female graves was found in the eastern Manych steppes and Kuban-Azov steppes during the Yamna culture.[13] In Ukraine, the ratio was intermediate between the other two regions.[13]

The most obvious archeological remains associated with the Scythians are the great burial mounds, some over 20 m high, which dot the Ukrainian and Russian steppe belts and extend in great chains for many kilometers along ridges and watersheds. From them much has been learnt about Scythian life and art.[14]

Some excavated kurgans include: 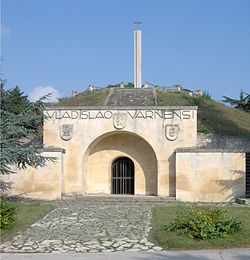 Memorial of the Battle of Varna, which took place on 10 November 1444 near Varna, Bulgaria. The facade of the mausoleum is built into the side of an ancient Thracian tomb.

Kurgan building has a long history in Poland. The Polish word for kurgan is kopiec or kurhan. Some excavated kurgans in Poland: