From Infogalactic: the planetary knowledge core
Jump to: navigation, search
For other uses, see Kursk (disambiguation). 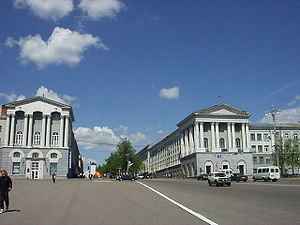 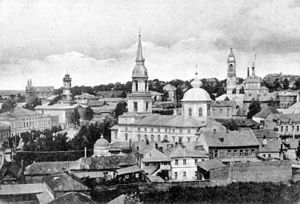 The first written record of Kursk is dated 1032.[9] It was mentioned as one of Severian towns by Prince Igor in The Tale of Igor's Campaign: "As to my Kurskers, they are famous knights—swaddled under war-horns, nursed under helmets, fed from the point of the lance; to them the trails are familiar, to them the ravines are known, the bows they have are strung tight, the quivers, unclosed, the sabers, sharpened; themselves, like gray wolves, they lope in the field, seeking for themselves honor, and for their prince, glory."

The seat of a minor principality, Kursk was raided by the Polovtsians in the 12th and 13th centuries and destroyed by Batu Khan around 1237. The city was rebuilt no later than 1283. It was ruled by Grand Duchy of Lithuania between 1360 and 1508. Kursk joined the centralized Russian state in 1508, becoming its southern border province. It was an important center of the corn trade with Ukraine and hosted an important fair, which took place annually under the walls of the monastery of Our Lady of Kursk.

However, a century later the city re-emerged in a new place; date of re-considered grounds Kursk 1586 [9]. In 1596 a new fortress was built, in 1616 it was garrisoned by over 1,300 soldiers. At the beginning of the 17th century Kursk was repeatedly attacked by Polish-Lithuania (in 1612, 1616, 1617, 1634), the Crimean Tatars, and the Nogai horde, but Kursk fortress was never taken. Residents of Oryol and other southern Russian cities were resettled in Kursk (by 1678 2,800 had been resettled). The city developed due to its advantageous geographical position on the shortest route from Moscow to the Crimea and from Kiev to the Crimea.

After a fire in 1781 devastated Kursk, a new plan for the city was developed in which a market center would be at the heart of the city (it was erected in the central square, known as Red Square). In 1768 the Voskirsensko Ilinskaya Church was built (Russian: Воскресенско-Ильинская церковь). In 1778 both the Sergiev Cathedral Kazan Cathedral Baroque and Trinity Sergius Cathedral were completed. The city opened its first school for the nobility in 1783. A men's gymnasium was opened in 1808 and a seminary in 1817. A women's gymnasium was opened in 1870.[citation needed]

At the beginning of the 20th century Kursk played a dominant role in the food industry (Kvilitsu AK, one of the largest breweries in Russia, operated in Kursk) and in other industries as well; so, in the 1900s, appeared in the city 4 sitoproboynye shops (of which the largest was a workshop Tikhonov, products are sent to foreign markets - Germany, Austria-Hungary, etc.). Organized several engineering enterprises (in 1914 there were seven, including one - rail). Working conditions in the factories of Kursk were harsh and often resulted in strikes (for instance, from 1901-03 the workers at the sugar mill went on strike). Kursk workers participated in the general political strike during the 1905 Russian Revolution.

On November 26 (December 9,) 1917 the Soviets took power. Kornilovites came to Kursk in September 20, 1919. On September 20th, 1919, troops under the command of General Denikin entered the city. On November 19, 1919, the Red Army took Kursk. The Soviet government valued Kursk for rich deposits of iron ore and developed it into one of the major railroad hubs in the Russian southwest. In 1932 in the Kursk was included Yamskaya Sloboda. In 1935 a tram system began operating in the city. In 193?, the territory of the city of Kursk was divided into Leninsky District (left bank of the Kura), Dzerzhinsky District (right bank of the Kura) and Kirov District (Yamskaya Sloboda). In 1937 Stalinsky District was formed in the southern outskirts of the city.

During World War II, Kursk was occupied by Germany between November 4, 1941 and February 8, 1943. The village of Prokhorovka near Kursk was the center of the Battle of Kursk, a major engagement between Soviet and German forces which is widely believed by historians to have been the largest tank battle in history and was the last major German offensive mounted against the Soviet Union.

Rebuilding efforts in the city began in February 1944. The cultural life recovered as well: on 19 February the cinema reopened and on February 27 the drama theatre. In 1953 the tram system began operating. By 1950 the urban economy had been completely restored. On August 17, 1956, Stalinsky District was renamed Promishlenost District, and Dzerzhinsky District was abolished and its territory divided between Promishlenost and Leninsky Districts.

In 2009, for the first time in 90 years at the site of Theotokos of Kursk, the most revered icon in the Russian Orthodox Church, received the name Hodigitria Russian diaspora.

Until 2010, Kursk had the status of historical settlement, but the Russian Ministry of Culture deprived the city of this status on July 29, 2010 in resolution № 418/339.

On October 28, 2011, for the first time in 30 years, the city opened a new firehouse for the protection of the Central District, with modern equipment. In 2012 Kursk celebrated its 980th anniversary.

In addition to its importance as an administrative hub, Kursk is important as an industrial centre. Activity focuses on iron based industry, the chemical sector and a large food processing industry, reflecting the richness of agriculture in the surrounding "Black Earth" region.

Particularly noteworthy is the so-called Kursk Magnetic Anomaly (Russian: Курская магнитная аномалия), the world's largest known iron-ore reserve, where the iron content of the ore ranges from 35% up to 60%.

In Kurchatov, some 40 km (25 mi) to the south-west, is the Kursk Nuclear Power Plant, incorporating four RBMK-1000 ("High Power Channel-type Reactor") (Russian: Реактор Большой Мощности Канальный) reactors similar to those implicated in the 1986 Chernobyl disaster. The oldest of the Kursk reactors has been operational since 1977, and the newest of them since 1986.

The oldest building in Kursk is the upper church of the Trinity Monastery, a good example of the transition style characteristic of Peter the Great's early reign. The oldest lay building is the so-called Romodanovsky Chamber, although it was erected in all probability in the mid-18th century, when the Romodanovsky family had ceased to exist.

The city cathedral was built between 1752 and 1778 in the splendid Baroque style and was decorated so sumptuously that many art historians attributed it to Bartolomeo Rastrelli. Although Rastrelli's authorship is out of the question, the cathedral is indeed the most impressive monument of Elizabethan Baroque not to be commissioned by the imperial family or built in the imperial capital. 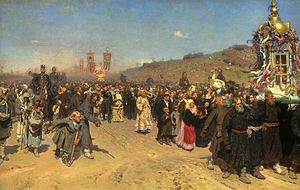 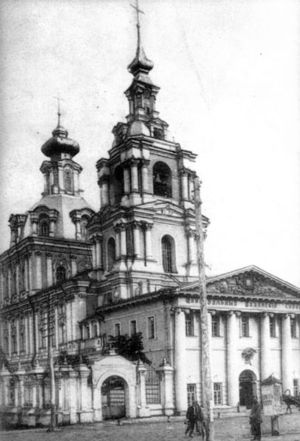 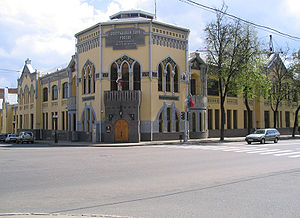 The cathedral has two stories, with the lower church consecrated to St. Sergius of Radonezh and the upper one — to the Theotokos of Kazan. The upper church is noted for an intricate icon screen which took sixteen years to complete. The three-story cathedral bell tower derives peculiar interest from the fact that Seraphim of Sarov, whose father took part in construction works, survived an accidental fall from its top floor at the age of seven. The Resurrection Church is also shown where St. Seraphim was baptized.

The monastery cathedral of the Sign (1816–26) is another imposing edifice, rigorously formulated in the purest Neoclassical style, with a cupola measuring 20 meters (66 ft) in diameter and rising 48 meters (157 ft) high. The interior was formerly as rich as colored marbles, gilding, and frescoes could make it. During the Soviet period, the cathedral was desecrated, four lateral domes and twin belltowers over the entrance pulled down. There are plans to restore the church to its former glory.

The modern city is a home for several universities: Kursk State Medical University, State Technical University, Kursk State University (former Pedagogical University) and Agricultural Academy, as well as the private Regional Open Social Institute (ROSI). There are also modern shrines and memorials commemorating the Battle of Kursk, both in the city and in Prokhorovka.

The Command Station Bunker & Museum[14][not in citation given]was built specifically in memorial of the courageous Russian T-34 tank units that fought in the Battle of Kursk, where a T-34 tank is on display. Over 6,000 armored vehicles fought in close range over the open territory near Kursk in 1943. This battle stopped the German advance into the Kursk Salient, and was a turning point of World War II on the Eastern Front.

Kursk played a role in the Cold War as host to Khalino air base.

Nearby is Tsentralno-Chernozemny Zapovednik, a large section of steppe soil that has never been plowed. It is used for a variety of research purposes. 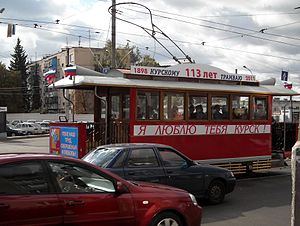 Since 1868 there has been a railway connection between Kursk and Moscow.[15] Kursk is located on a major railway line between Moscow and Kharkov, with trains also linking the city to Voronezh and Kiev. The Kursk Vostochny Airport provides domestic flights. Public transport includes buses, trolleybuses, and trams. Since 2007, the public transport introduced a satellite navigation system. The total length of the road network of the city of Kursk is 595.8 km, of which 496.2 km of roads are paved. Roads of the city have access to federal highway M2 "Crimea", as well as on the highway A144 (Kursk - Voronezh - Saratov) and P199 (border with Ukraine).

On September 5, 2011 in Kursk commissioned automated monitoring system fare.[16] Implementation of the system in operation is carried out by Kursk Integrated Ticket System was to take place in three stages: At the initial stage is implemented partially open version of the system, in which the sale of tickets and travel control social cards carried in the cabin of public transport conductors with handheld validators, the second stage involves the installation of stationary validators, third - commissioning turnstiles . After completion of the implementation, the automated monitoring system drive will operate in "closed" mode : turnstiles will be installed at the entrance and exit of passengers. As of September 2011 turnstiles installed on 44 buses, 10 trolley buses and trams 5

Kursk State University is home to the Russian Chamber Orchestra, under the direction of conductor and trumpet soloist Sergey Proskurin. The orchestra performs regularly, tours internationally and has produced multiple CDs.[17]

Pushkin Theater located in the center of the city. It has permanent company as well as visiting shows.

Kursk hams since 1935 could receive television broadcasts from Moscow. In 1960, the Committee on Radio and Television was created by the in Kursk Oblast Executive Committee. The first transmission of local television aired January 14, 1961.[18] Main fixed line and cellular operators are active in the city.

Kursk is twinned with: