Kurt-Werner Brändle (19 January 1912 – 3 November 1943) was a German Luftwaffe military aviator during World War II, a fighter ace credited with 180 enemy aircraft shot down in over 700 combat missions. The majority of his victories were claimed over the Eastern Front, with 25 claims over the Western Front.[Note 1]

On 5 July 1943 during the Battle of Kursk, Brändle achieved his 150th aerial victory and in August 1943 was transferred to the Western Front fighting in Defense of the Reich. There Brändle was killed in action on 3 November 1943 west of Amsterdam in the Netherlands. His body was washed ashore near Zandvoort on 30 December 1943.

Brändle was born on 19 January 1912 in Ludwigsburg in the Kingdom of Württemberg, a federated state of the German Empire. His father was a Meister, a master craftsman, in the field of precision mechanics. Following school, Brändle learned the trade of a surgical instrument maker and worked in his father's firm.[4]

Since his early youth he was very enthusiastic about flying and volunteered for military service in the Luftwaffe of the Third Reich on 10 December 1935. There he participated in a number of exercises and was promoted to Leutnant (second lieutenant) of the Reserves on 1 December 1936. In his civilian life, Brändle attained a pilot license and worked as a flight instructor. As an instructor, he trained roughly 150 students and logged more than 6,000 starts and 8,000 flight hours before he became a military aviator. In addition to his passion for motor power flight, he also was a glider pilot.[4]

In early 1937 Brändle passed his Meister examination in aircraft construction and in the same year was trained as a fighter pilot with Jagdgeschwader 134 "Horst Wessel" (JG 134—134th Fighter Wing), named after the martyr of the Nazi movement Horst Wessel.[Note 2] As of 1 February 1939, Brändle served with Flieger-Ausbildungs-Regiment 22 (22nd Flight Training Regiment) in Güstrow. There, he transferred from the reserve force to active service and was promoted to Oberleutnant (first lieutenant) on 1 June 1939. He was then transferred to the 4. Staffel (4th Squadron) of Jagdgeschwader 53 (JG 53—53rd Fighter Wing).[5]

World War II in Europe began on Friday 1 September 1939 when German forces invaded Poland. Brändle received the Iron Cross 2nd Class (Eisernes Kreuz 2. Klasse) on 20 April 1940. He claimed his first aerial victory on 10 May 1940 during the Battle of France, shooting down an Armée de l'Air (French Air Force) Morane-Saulnier M.S.406 south of Sedan.[5] In total Brändle claimed two victories over France before he was wounded on 26 May 1940.[2] During takeoff on a maintenance test flight he crashed into a Dornier Do 17 injuring himself in the head. He spent the next few weeks in the military hospital at Heidelberg.[5][6] 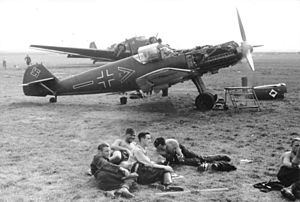 After recovering from the hospital, Brändle claimed his second victory during the Battle of Britain over the Royal Air Force (RAF) on 11 August 1940. On 26 August 1940, he was tasked with the leadership of 5. Staffel (5th Squadron) of JG 53. Following his fourth aerial victory, he was awarded the Iron Cross 1st Class (Eisernes Kreuz 1. Klasse) on 3 September 1940. He was officially appointed Staffelkapitän (squadron leader) of 5. Staffel on 15 September 1940. On 11 November 1940 he claimed his 6th and 7th aerial victories and was awarded the Front Flying Clasp of the Luftwaffe for Fighter Pilots (Frontflugspange für Jagdflieger) in Silver on 5 May 1941 and in Gold on 7 June 1941.[5]

The bulk of the Geschwader's air elements were moved via Jever, in northern Germany, to Mannheim-Sandhofen on 8 June 1941. There the aircraft were given a maintenance overhaul prior to moving east. The II. Gruppe was transferred to Neusiedel in East Prussia, present-day Malomožaiskojė in Kaliningrad Oblast in Russia, between 12–14 June.[7] On 22 June the Geschwader crossed into Soviet airspace in support of Operation Barbarossa, the invasion of the Soviet Union which opened the Eastern Front. There, Brändle claimed further victories and by the end of October 1941 was credited with 28 aerial victories.[5]

Brändle's unit was then relocated to the Western Front again in October 1941 where it was based at Leeuwarden in the Netherlands before it was moved to the Mediterranean theater in December 1941. Based at Comiso airfield, Brändle flew combat missions against the RAF during the Siege of Malta. There he was awarded the German Cross in Gold (Deutsches Kreuz in Gold) on 25 February 1942 and four days later, on 1 March, he was promoted to Hauptmann (captain).[2][5]

On 1 May 1942, Brändle was appointed Gruppenkommandeur (group commander) of II. Gruppe of Jagdgeschwader 3 "Udet" (JG 3—3rd Fighter Wing), named after the World War I fighter ace Ernst Udet. Its former Gruppenkommandeur, Hauptmann Karl-Heinz Krahl, had been killed in action over Malta on 14 April 1942.[8] At the time, the Gruppe was stationed at Plzeň for rest and refit before it was relocated to the Eastern Front on 18 May 1942. Too late to participate in the Battle of the Kerch Peninsula, it was located on the left wing of Army Group South, assigned to an airfield at Chuguyev in the Kharkov area. Brändle scored the Gruppe's first victory after the relocation, claiming a Polikarpov R-5 reconnaissance bomber aircraft at 3:49 am on 20 May 1942.[9] By this date, Brändle had accumulated 36 victories.[10] He was awarded the Knight's Cross of the Iron Cross (Ritterkreuz des Eisernen Kreuzes) on 1 July 1942 for 49 aerial victories. On this day, he claimed his 53rd aerial victory, after he shot down a Ilyushin Il-2 "Sturmovik".[5]

In July and August 1942, he claimed 50 aerial victories in the southern sector of the Eastern Front, among them his 100th to 102nd victory on 23 August 1942. He was the 17th Luftwaffe pilot to achieve the century mark.[11] For this achievement he was awarded the Knight's Cross of the Iron Cross with Oak Leaves (Ritterkreuz des Eisernen Kreuzes mit Eichenlaub) on 27 August 1942, the 114th officer or soldier of the Wehrmacht so honored. The presentation was made by Adolf Hitler personally.[5]

Defense of the Reich and death

In early August 1943, Brändle's II. Gruppe was withdrawn from the Eastern Front for service in Defense of the Reich on the Western Front. The Gruppe spent one-month training in northern Germany before they arrived at the Schiphol airfield near Amsterdam in the Netherlands on 12 September.[13]

On 3 November 1943, Brändle shot down two P-47 Thunderbolts fighters escorting a formation of Boeing B-17 Flying Fortresses on a mission targeting Wilhelmshaven. Later that day, he was killed in action west of Amsterdam in the Netherlands. Following an attack by a group of Martin B-26 Marauders on Schiphol airfield, II. Gruppe scrambled to counter the attack.[14] It is assumed that he was shot down in his Messerschmitt Bf 109 G-6 (Werknummer 26058—factory number) by Royal Canadian Air Force (RCAF) fighters under the command of Wing Commander Lloyd Chadburn.[2][15] His body was later washed ashore near Zandvoort on 30 December 1943 and was buried at the Heroes Cemetery in Amsterdam (field 74, grave 405) one day later. His remains were moved in January 1944 before they were reinterred for a last time on 2 December 1947, this time at the cemetery Ysselsteyn (block CW, row 1, grave 25).[12]