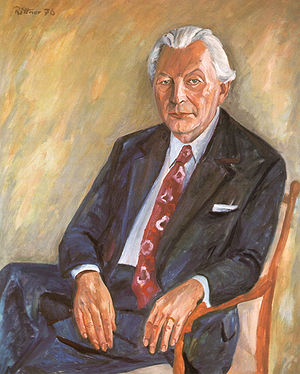 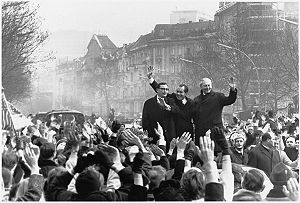 President Nixon and Chancellor Kurt Kiesinger waving to the crowd in West Berlin.

Kurt Georg Kiesinger (German: [ˈkʊʁt ˈɡeːɔʁk ˈkiːzɪŋɐ]; 6 April 1904 – 9 March 1988) was a German lawyer, Catholic politician and member of the Christian Democratic Union (CDU). His role in the Foreign Ministry's radio propaganda department during World War II has led to controversies. Kiesinger, an outstanding orator and mediator (dubbed Häuptling Silberzunge, or "Chief Silver-Tongue" in German), and author of poetry and various books, founded the Universities of Konstanz and Ulm during his time as Ministerpräsident of Baden-Württemberg (1958 - 1966) and was Chancellor of West Germany from 1 December 1966 until 21 October 1969.

Born in Ebingen, Kingdom of Württemberg (now Baden-Württemberg), Kiesinger was educated in Berlin and became a lawyer. As a student, he joined the (non-couleur wearing) Roman Catholic corporations de (K.St.V. Alamannia Tübingen) and Askania-Burgundia Berlin. He became a member of the Nazi Party in February 1933, a few weeks after Hitler became chancellor. In 1940, he was called to arms but avoided mobilization by finding a job in the Foreign Ministry's radio propaganda department, rising quickly to become deputy head of the department from 1943 to 1945 and the ministry's connection with Goebbels' Propaganda Ministry.[1] After the war, he was interned and spent 18 months in the Ludwigsburg camp before being released as a case of mistaken identity.[2]

During the controversies of 1966, the magazine Der Spiegel unearthed a Memorandum dated 7 November 1944 (six months before the end of the war in Europe) in which a colleague denounced to SS chief Heinrich Himmler a conspiracy including Kiesinger that was allegedly propagating defeatism, and hampering anti-Jewish actions within his department and several others.

By the time the first national elections were held in the Federal Republic in 1949, Kiesinger had joined the Christian Democratic Union (CDU) and won a seat in the Bundestag, the West German parliament. In 1951 he became a member of the CDU executive board. During that time, he became known for his rhetorical brilliance, as well as his in-depth knowledge of foreign affairs. However, despite the recognition he enjoyed within the Christian Democrat parliamentary faction, he was passed over during various cabinet reshuffles. Consequently, he decided to switch from federal to state politics: he was appointed State Governor (Ministerpräsident) of the federal state of Baden-Württemberg on 17 December 1958, an office in which he served until 1 December 1966.

In 1966 following the collapse of the existing CDU/CSU-FDP coalition, Kiesinger was elected to replace Ludwig Erhard as Chancellor, heading a new CDU/CSU-SPD alliance. The government formed by Kiesinger remained in power for nearly three years with the SPD leader Willy Brandt as Deputy Federal Chancellor and Foreign Minister. Kiesinger reduced tensions with the Soviet bloc nations establishing diplomatic relations with Czechoslovakia, Romania and Yugoslavia but he opposed any major conciliatory moves. A number of progressive reforms were also realised during Kiesinger's time as Chancellor. Pension coverage was extended in 1967 via the abolition of the income-ceiling for compulsory membership. In education, student grants were introduced, together with a university building programme, while a constitutional reform of 1969 empowered the federal government to be involved with the Lander in educational planning through joint planning commission. Vocational training legislation was also introduced, while a reorganisation of unemployment insurance promoted retraining schemes, counselling and advice services and job creation places. In addition, under the “Lohnfortzahlunggesetz” of 1969, employers had to pay all employees’ wages for the first 6 weeks of sickness.[3] In August 1969,[4] the landabgaberente (a higher special pension for farmers willing to cede farms that were unprofitable according to certain criteria) was introduced.[5]

One of his low points as Chancellor was in 1968 when Nazi-hunter Beate Klarsfeld, who campaigned with her husband Serge Klarsfeld against Nazi criminals, publicly slapped him in the face during the 1968 Christian Democrat convention, while calling him a Nazi. She did so in French and - whilst being dragged out of the room by two ushers - repeated her words in German saying "Kiesinger! Nazi! Abtreten!" ("Kiesinger! Nazi! Step down!") Kiesinger, holding his left cheek, did not respond. Up to his death he refused to comment on the incident and in other opportunities he denied explicitly that he had been opportunistic by joining the NSDAP in 1933 (although he conceded joining the German Foreign Ministry to dodge his 1940 draft by the Wehrmacht). During his period as Chancellor, he made Carl Schmitt his regular intellectual companion (also a 1933 NSDAP late-joiner). Other prominent critics included the writers Heinrich Böll and Günter Grass (in 1966, Grass had written an open letter urging Kiesinger not to accept the chancellorship).

After the election of 1969, the SPD preferred to form a coalition with the FDP, ending the uninterrupted post-war reign of the CDU chancellors. Kiesinger was succeeded as Chancellor by Willy Brandt. Kiesinger continued to head the CDU/CSU in opposition until July 1971 and remained a member of the Bundestag until 1980. Of his memoirs only part one (Dark and Bright Years) was completed, covering the years up to 1958. He died in Tübingen. After a requiem mass in Stuttgart's St. Eberhard Church, his funeral procession was followed by protesters (mainly students) who wanted his former membership in the Nazi Party remembered.