Kurt Student (12 May 1890 – 1 July 1978) was a German Luftwaffe general who fought as a fighter pilot during the First World War and as the commander of German Fallschirmjäger (paratroopers) during the Second World War. He was convicted of war crimes for his actions in Crete. He received the Knight's Cross of the Iron Cross with Oak Leaves (German: Ritterkreuz des Eisernen Kreuzes mit Eichenlaub). The Knight's Cross of the Iron Cross and its higher grade Oak Leaves were awarded to recognise extreme battlefield bravery or successful military leadership. He lost the first major airborne operation of WWII, the Battle for The Hague in May 1940, where he narrowly escaped capture.

Student was born in Birkholz[1] (today Borów), a village in the Landkreis of Züllichau-Schwiebus in the Prussian province of Brandenburg, in a region now located in Poland.

Student entered the Imperial German Army as an officer candidate in 1910 and was commissioned a lieutenant in March 1911. After serving initially with a light infantry (Jäger) battalion, he underwent pilot training in 1913. He served from the beginning of World War I until February 1916 with Feldflieger-Abteilung 17 on the Galician front, rising to command of the unit on 1 June 1916. On 5 July, he became a charter member of the Fokker Scourge, when he scored his first confirmed victory, forcing Nieuport 11 no. 1324 to land behind German lines. Student re-equipped the French plane with a Spandau machine gun, and seems to have flown it in combat.[2][3]

During the interwar period, Student tried to keep German military aviation from becoming technologically obsolete, since, under the Treaty of Versailles, Germany was forbidden to maintain an air force. In the immediate post-war years, he was assigned to military research and development. He became involved in military gliders, since gliding was not forbidden by the treaty. He also attended the Red Army Air Forces maneuvres, where he first came in contact with the idea of airborne operations.

After Adolf Hitler came to power in Germany, the Luftwaffe was secretly reestablished. Student transferred from the Army to the Luftwaffe and was appointed by Hermann Göring to be the head of its training schools, a position which became official when the Treaty of Versailles was renounced in 1935. In July 1938, he was named commander of airborne and air-landing troops, and in September commanding general of the 7. Flieger-Division, Germany's first Fallschirmjäger division.

The division played no part in the invasion of Poland. In their first action, his troops failed to achieve even the least of their objectives in the Battle for The Hague on 10 May 1940, taking and losing three airfields on the first day of the battle (an operation in which the German air force also incurred enormous losses).[5] Student was almost taken prisoner there, and was shot in the head - it was later determined to be a stray German round[6] - in Rotterdam following the Battle of Rotterdam. His capture was halted only when Rotterdam was bombed on 14 May. However, in another operation during the Blitzkrieg, the capture of the Belgian fortress of Eben-Emael, Student's troops proved their value by defeating the 650 defenders with less than 100 men. He was decorated with the Knight's Cross of the Iron Cross for his leadership and bravery in these operations. Nonetheless it took the Fallschirmjäger a full year to recover from these operations, as a result of which they were not available for the planned invasion of England. 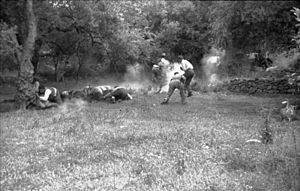 The massacre of Greek civilians at Kondomari, Crete, 1941

In January 1941, Student was named commanding general of the XI. Fliegerkorps, the newly formed command for the expanding German airborne forces. In this capacity, Student directed Operation Mercury (Unternehmen Merkur), the airborne invasion of the island of Crete in May 1941. In January 1941, he is known to have proposed a similar operation in Northern Ireland along the same lines of Plan Kathleen, at the time Göring told him that his focus should be on the airborne conquest of Gibraltar via Operation Felix.[citation needed] Crete was taken, but the high casualties caused Hitler to forbid future airborne operations. Acting as the temporary commander of the island, immediately after the surrender of Crete on 31 May 1941, on Göring's order Student issued an order for a launching of a wave of brutal reprisals against the local population with the Massacre of Kondomari and the Razing of Kandanos being typical examples.

In 1942, Student was identified as the commander of Operation Hercules (Unternehmen Herkules) the planned invasion of Malta. However, this plan was never carried out.

In 1943, Student ordered Major Harald Mors to plan Operation Oak (Unternehmen Eiche), the successful raid conducted by a special Fallschirmjäger unit to free Italian dictator Benito Mussolini. They landed with gliders and STOL aircraft on a hilltop. The well-known Waffen SS commando Otto Skorzeny took part in this operation. Student received the Oak Leaves to the Knight's Cross of the Iron Cross for his role in the operation.

Student was transferred to Italy and later to France, where he was involved in the defence of Normandy in 1944. He was put in charge of the First Paratroop Army and took part in countering the Allied Operation Market Garden, near Arnhem. After a brief time at the Eastern Front in Mecklenburg in 1945, he was captured by British forces in Schleswig-Holstein in April of that same year, before he could take command of Army Group Vistula.

In May 1947, Student was put on trial for eight allegations of mistreatment and murder of prisoners of war by his men in Crete (Massacre of Kondomari, Razing of Kandanos). He was proven guilty of three charges, and was sentenced to five years of prison as a punishment. Later on, Student was given an early discharge in 1948 due to medical reasons.[7]

He was a source for Cornelius Ryan's book A Bridge Too Far. Student died 1 July 1978 (aged 88) in Lemgo, North Rhine-Westphalia, West Germany.