Kurt Welter (25 February 1916 – 7 March 1949) was a German Luftwaffe fighter ace and the most successful Jet Expert of World War II.[Note 1] A flying ace or fighter ace is a military aviator credited with shooting down five or more enemy aircraft during aerial combat.[1] He claimed a total of 63 aerial victories—that is, 63 aerial combat encounters resulting in the destruction of the enemy aircraft—achieved in 93 combat missions. He recorded 56 victories at night, including 33 Mosquitos,[Note 2] and scored more aerial victories from a jet fighter aircraft than anyone else in World War II and possibly in aviation history.[2][Note 3] However this score is a matter of controversy; research of Royal Air Force losses suggests Welter may have overclaimed.

Welter was born in Cologne-Lindenthal (Köln-Lindenthal) on 25 February 1916. He joined the military service of the Luftwaffe in 1934 and was trained as a pilot. He showed a strong natural ability as a pilot and was subsequently selected for flight instructor training and served many years as a flight instructor. In 1943 Welter transferred to an operational night fighter unit flying contemporary piston engine fighter aircraft. On 18 October 1944, after 40 combat missions, Welter was awarded the Knight's Cross of the Iron Cross (Ritterkreuz des Eisernen Kreuzes). In early 1945, Welter transferred to an experimental jet night fighter unit flying the Messerschmitt Me 262. On 11 March 1945 he was awarded the Knight's Cross of the Iron Cross with Oak Leaves (Ritterkreuz des Eisernen Kreuzes mit Eichenlaub) for 48 aerial victories. Welter survived the war and was killed in an accident at a railroad crossing on 7 March 1949.[3]

Welter was born on 25 February 1916 in Cologne-Lindenthal. Following scholloing and completing a merchant apprenticeship, he joined the Luftwaffe on 1 October 1934 and was trained as a pilot.[4] Because of his skill as a pilot he was trained as a flight instructor. During World War II, Welter was promoted to Feldwebel on 1 August 1940 and transferred to flight training school Flieger-Ausbildungs-Regiment 63 and later on to the flight instructor school at Quedlinburg. Here Welter served as a flight instructor until 10 August 1943 when he was transferred to Blindflugschule 10 (school for instrument flight training) in Altenburg with the rank of Oberfeldwebel as a night fighter instructor.[5]

On 2 September 1943, Welter was transferred to 5. Staffel/Jagdgeschwader 301 (JG 301), a night fighter squadron that experimented with the use of largely radar-less single-seat Fw 190A-5 and Fw 190A-6 fighter aircraft by night, often equipped with the FuG 350 Naxos device, used in the form of German night-fighter operations without AI radar — due to Düppel interference from RAF Bomber Command aircraft — dubbed Wilde Sau (wild boar). On his first Wilde Sau intercept mission against Allied bombers on the night of 22 September 1943, Welter shot down two Allied four-engine bombers. He shot down a further two on his third mission on the night of 3 October 1943. By the beginning of April, he had accumulated 17 victories in only 15 missions. Subsequently on 10 May 1944 Welter was awarded the German Cross in Gold. Leutnant Welter was transferred to 5. Staffel/Jagdgeschwader 300 (JG 300) on 7 July 1944.[5]

Welter transferred to 10./JG 300 on 4 September 1944. 10. Staffel/JG 300 was established to counter intrusions by RAF Mosquito twin-engined bombers, flying specially optimized for speed Bf 109G-6/AS fighters. In September, Welter claimed seven Mosquitos downed, including one by ramming. It is thought that during his service with 1./NJG 10 and 10./JG 300, Welter recorded 12 victories in only 18 missions.[6] On the night of 19 September 1944, according to Hinchliffe, Welter may have shot down Wing Commander Guy Gibson who was leading a 300-bomber attack on Mönchengladbach and Rheydt. Gibson's Mosquito crashed near Steenbergen in the Netherlands. Welter was the only German pilot to have claimed a Mosquito.[7][8] The claim is unlikely. Welter submitted his victory claim north of Wittenberg in eastern Germany, some hundreds of miles away from the place Gibson's Mosquito was found.[8] Recent research suggests that his victim was Mosquito VI "PZ177" of No. 23 Squadron RAF which was shot down by Welter at 8,000 metres (26,000 ft) west of Bad Münder, Holzminden. The crew, F/O. K. Eastwood and Navigator F/L. G.G. Rogers were both killed.[9] Welter was awarded the Knight's Cross of the Iron Cross on 18 October 1944 for 33 victories in just 40 missions.[5] 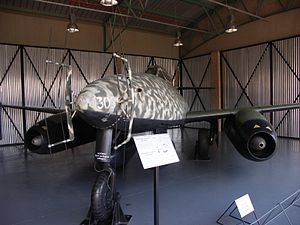 Neptun radar-equipped Me 262B-1a/U1 in a South African museum.

On 2 November 1944, Welter was transferred to II. Gruppe/Nachtjagdgeschwader 11 (NJG 11), a reformation of his former unit. Here he was given command of a special Kommando subordinate to II./NJG 11, set up on 11 November 1944 at Erprobungsstelle Rechlin's southern Lärz airbase (2 November 1944 – 28 January 1945), and dedicated to performing nocturnal interception with the Messerschmitt Me 262 jet fighter of RAF Mosquitos attacking the Berlin area. According to some sources, Oberleutnant Welter added a Lancaster to his growing list of Mosquitos on the night of 12 December 1944, the first night victory by a jet fighter.[10] Other sources state that his first aerial victory flying the Me 262 was claimed either on the night of 2 January 1945[11] or 5 January 1945.[12] On 28 January 1945, the unit initially known as Sonderkommando Stamp, named after its founder Major Gerhard Stamp and then Sonderkommando Welter, was re-designated 10. Staffel/NJG 11 and transferred to the airfield at Burg near Magdeburg (28 January 1945 – 12 April 1945). The unit was equipped with radar-less Me 262 jet fighters, and tasked with intercepting Mosquito bomber aircraft of No.8 Group RAF in the Berlin area, with the aid of ground control and the searchlight defences, partially a Wilde Sau form of night combat.[13] Welter had claimed three aerial victories while flying the Me 262 by early February 1945.[13]

Much of the controversy surrounding Welter's claims for success in nocturnal aerial combat with the Me 262 stems from a memorandum written by Welter on 29 May 1945 for the benefit of his British captors. In this memorandum Welter stated that between December 1944 and the end of January 1945, as the sole pilot of Kommando Welter, he flew seven Me 262 sorties and achieved three victories against Mosquito aircraft and two victories against Lancaster aircraft. Welter further stated that from the formation of 10./NJG 11 on 28 January 1945 to the end of the war, 10./NJG 11 flew around another 63 operational sorties and claimed a further 38 victories against Mosquito aircraft at night and five victories against Mosquito aircraft by day; his share being 20 Mosquitos at night and two during the day. Thus, according to the memo, a total of 25 Mosquitoes and two Lancasters were claimed in aerial combat by Welter, flying the Me 262 with the Kommando/Staffel, while other pilots of the Staffel claimed a further 21 kills (of which three were achieved with the two-seater Me 262).[24] Official Luftwaffe documents show that by 4 April 1945, 10./NJG 11 had claimed 34 aerial victories, of which only one was claimed in a two-seater Me262.[25][Note 5] Research of RAF records show that only a maximum of 15 Mosquitoes could have been possibly destroyed by Kommando Welter—10./NJG 11.[25]

Officially Kurt Welter was credited with 63 victories in 93 missions, of which 56 victories were achieved at night and seven by day. Among his claimed 63 victories are up to 33 Mosquitos.[26] Thus, there remains some controversy about the exact number of victories achieved while flying the Me 262, with only three of the Mosquito kills coinciding with RAF records: Welter may have been guilty of overclaiming[27] Welter survived the war and was employed at a sugar factory.[28] He was killed on 7 March 1949 in Leck in Schleswig-Holstein waiting at a level crossing, when logs falling from an improperly loaded passing train crushed his car.[5]