From Infogalactic: the planetary knowledge core
Jump to: navigation, search
This article is about the town. For the district, see Kushinagar district.

Kushinagar, Kusinagar or Kusinara is a town and a Nagar Panchayat in the Kushinagar district of the Indian state of Uttar Pradesh located around NH-28, and is 52 km east of Gorakhpur city. It is an important Buddhist pilgrimage site, where Buddhists believe Gautama Buddha attained Parinirvana after his death.[2] Outside India, it is an International Buddhist Pilgrimage Centre. The followers of Buddhism, especially from Asian Countries, wish to visit this place at least once in their lifetime.[3]

According to one theory, Kushwati was capital of Kosala Kingdom and according to Ramayana it was built by King Kush, son of Rama, protagonist of the epic Ramayana. While according to Buddhist tradition Kushawati was named prior to the king Kush. The naming of Kushwati is believed to be due to abundance of Kush grass found in this region.[3]

The present Kushinagar is identified with Kushawati( in pre-Buddha period ) and Kushinara (in Buddha period). Kushinara was the capital of Mallas which was one of the sixteen mahajanpads of the 6th Century B.C. Since then, it remained an integral part of the erstwhile empires of Maurya, Shunga, Kushana, Gupta and Harsha dynasties.

In medieval period, Kushinagar had passed under the suzerainty of Kultury Kings. Kushinara continued to be a living city till the 12th Century A.D. and was thereafter lost into oblivion. Padrauna is believed to be ruled over by a Rajput adventurer, Madan Singh in the 15th century A.D.

However, modern Kushinagar came into prominence in the 19th Century with archeological excavations carried out by Alexander Cunningham, the first Archeological Surveyor of India and later followed by C.L. Carlleyle who exposed the main stupa and also discovered a 6.10 meters long statue of reclining Buddha, in 1876 A.D. Chandra Swami, a Burmeses Monk, came to India in 1903 and made "Mahaparinirvana Temple" into a living shrine.

After independence, Kushinagar remained the part of district Deoria. On 13 May 1994, it came into being as a new district of Uttar Pradesh.[5] 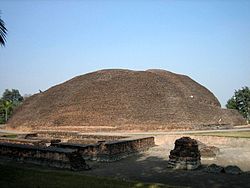 Kushinagar is situated at 53 km east from Gorakhpur on the National Highway -28, lies between latitude 26° 45´ N and 83° 24´ E.[6][7] Gorakhpur is the main railway terminus for Kushinagar while air strip of U.P. Civil Aviation is available in Kasia, 5 km. from Kushinagar.[6] 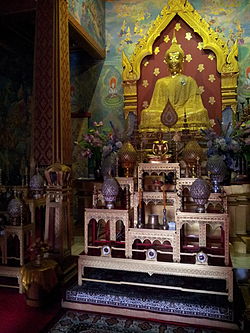 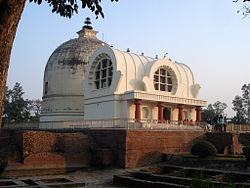 The reclining Nirvana statue of the Buddha is inside the Parinirvana Stupa. Statue is 6.10 metres long and is made of monolith red - sand stone. It represents the "Dying Buddha" reclining on his right side with his face towards the west. It is placed on a large brick-pedestal with stone-posts at the corners.[8]

Nirvana Chaitya is located just behind the Main Parinirvana Temple. It was excavated by Carlleyle in the year 1876. During excavations, a copper-plate was found, which contained the text of the "Nidana-Sutra" which concluded the statement that plate had been deposited in the "Nirvana-Chaitya" by one Haribala, who also installed the great Nirvana Statue of Buddha in the temple front.[8]

Ramabhar Stupa Ramabhar Stupa, also called a Mukutbandhan-Chaitya, is the cremation -place of Buddha. This Site is 1.5 km east of the main Nirvana Temple on the Kushinagar-Deoria road.[8]

Matha Kuar Shrine A Colossal statue of Lord Buddha is installed, which is carved out of one block which represents Buddha seated under the "Bodhi Tree" in a pose known as " Bhumi Sparsh Mudra " (Earth touching attitude). The inscription at the base of statue is datable to the 10th or 11th Century A.D.[8] 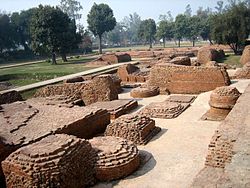 Current Member of legislative assembly(MLA) from Kushinagar Assembly constituency is Brahma Shankar Tripathi of Samajwadi Party[10] who is also minister in Government of Uttar Pradesh.

Following are some initiatives by district administration:

1. The Buddha Relic Distribution Site has been added as a new pilgrim spot on the Kushinagar Tourist Map. The site is located in Village Anirudhawa, at a walking distance from the main Mahaparinirvana Temple and 50 meters, right behind the Thai Temple.

2. The Buddha Ghat was constructed on the banks of the river Hiranyavati—Buddha was cremated on its bank—right behind the Ramabhar Stupa. It is said that Buddha's body wa's given the last bath in this river. 3. Work also started on The Buddha's Last Meal site at Pavanagar, village Satheeau, Fazilnagar, about 20 km before Kushinagar while approaching from Bihar. This is the spot where as per the Mahaparinirvana Suttra, Chunda the goldsmith offered Sukar-maddava, eating which the lord became sick.

4. Work also started at the Kakuttha River, Buddha took his last bath in this river. This is on the Main National Highway 28 at a bridge while approaching Kushinagar from Bihar after the Buddha's Last Meal site.

5. Pampor Stupa. A new Buddhist site was excavated at Village Pampor. The excavation revealed the remains of an old Buddhist Stupa. Rahul Sanskrityan the legendary Buddhist scholar from India is said to have identified Pampor as the famed Pava Kingdom of ancient India. Some decorated bricks were discovered from the site which has been handed over to the local museum at Kushinagar.

Kushinagar has made a lot of progress in education in recent times. Since last decade - dozens of private and governmental institutes have been launched at this little town. Here is a list of all educational institutes at Kushinagar:

Medical institutions and hospitals in Kushinagar

There are two governmental and several private hospitals and clinics available at Kushinagar and Kasia. The popular ones are: