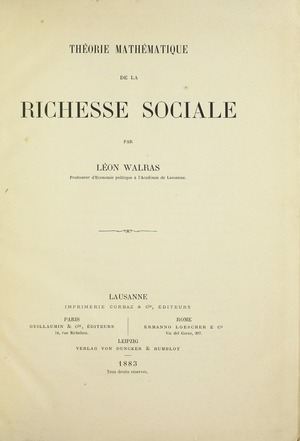 Walras was the son of French economist Auguste Walras. His father was a school administrator and not a professional economist, yet his economic thinking had a profound effect on his son. He found the value of goods by setting their scarcity relative to human wants.

Walras enrolled in the Paris École des Mines de Paris - MINES ParisTech,[2] but grew tired of engineering. He also tried careers as a bank manager, journalist, romantic novelist and a clerk at a railway company before turning to economics.[2] Walras received an appointment as the professor of political economy at the University of Lausanne.

Walras also inherited his father's interest in social reform. Much like the Fabians, Walras called for the nationalization of land, believing that land's value would always increase and that rents from that land would be sufficient to support the nation without taxes.

Another of Walras' influences was Augustin Cournot, a former schoolmate of his father. Through Cournot, Walras came under the influence of French Rationalism and was introduced to the use of mathematics in economics.

Professor of Political Economy at the University of Lausanne,[2] Switzerland, Walras is credited for having founded what subsequently became known, under direction of his Italian disciple, the economist and sociologist Vilfredo Pareto, as the Lausanne school of economics.[3]

Because for a long time most of Walras' publications were only available in French, only a relatively small section of the economics profession really became familiar with his work. This changed in the 1950s, largely due to the work of William Jaffé, the translator of Walras' main works, and the editor of his Complete Correspondence (1965).[citation needed] Walras' work was also too mathematically complex for many contemporary readers of his time. On the other hand, it has a great insight into the market process under idealized conditions so it has been far more read in the modern era.

Although Walras came to be regarded as one of the three leaders of the marginalist revolution,[4] he was not familiar with the two other leading figures of marginalism, William Stanley Jevons and Carl Menger, and developed his theories independently.

In 1874 and 1877 Walras published Elements of Pure Economics, a work that led him to be considered the father of the general equilibrium theory. The problem that Walras set out to solve was one presented by Cournot, that even though it could be demonstrated that prices would equate supply and demand to clear individual markets, it was unclear that an equilibrium existed for all markets simultaneously.

Walras constructed his basic theory of general equilibrium by beginning with simple equations and then increasing the complexity in the next equations. He began with a two-person bartering system, then moved on to the derivation of downward-sloping consumer demands. Next he moved on to exchanges involving multiple parties, and finally ended with credit and money.

The crucial step in the argument was Walras' Law which states that any particular market must be in equilibrium, if all other markets in an economy are also in equilibrium. Walras' Law hinges on the mathematical notion that excess market demands (or, inversely, excess market supplies) must sum to zero. This means that, in an economy with n markets, it is sufficient to solve n-1 simultaneous equations for market clearing. Taking one good as the numéraire in terms of which prices are specified, the economy has n-1 prices that can be determined by the equation, so an equilibrium should exist. Although Walras set out the framework for thinking about the existence of equilibrium clearly and precisely his attempt to demonstrate existence by counting the number of equations and variables was severely flawed: it is easy to see that not all pairs of equations in two variables have solutions. A more rigorous version of the argument was developed independently by Lionel McKenzie and the pair Kenneth Arrow and Gérard Debreu in the 1950s.

I state that things are useful as soon as they may serve whatever usage, as soon as they match whatever need and allow its fulfillment. Thus, there is here no point to deal with 'nuances' by way of which one classes, in the language of everyday conversation, utility beside what is pleasant and between the necessary and the superfluous. Necessary, useful, pleasant and superfluous, all of this is, for us, more or less useful. There is here as well no need to take into account the morality or immorality of the need that the useful things matches and permits to fulfill. Whether a substance is searched for by a doctor to heal an ill person, or by a assassin to poison his family, this is an important question from other points of view, albeit totally indifferent from ours. The substance is useful, for us, in both cases, and may well be more useful in the second case than in the first one.[1]

In Walras's theory of value, value is thus totally independent of the common meaning of value or utility. Production or increase of "value", in fact monetary amounts as for instance measured in profit or GNP, is independent of notions like a just or fair society or a better world. This is a fundament of modern "neoliberalism" or neoclassical economics.

In 1941 George Stigler[6] wrote about Walras: "There is no general history of economic thought in English which devotes more than passing reference to his work. … This sort of empty fame in English-speaking countries is of course attributable in large part to Walras' use of his mother tongue, French, and his depressing array of mathematical formulas." What ever caused the u-turn of Walras' consideration in the US, the influx of German-speaking scientists – the German version of the Éléments is of 1881 – after Hitler's rule was the initial start. To Schumpeter:[7] Walras is … greatest of all economists. His system of economic equilibrium, uniting, as it does, the quality of ‘revolutionary" creativeness with the quality of classic synthesis, is the only work by an economist that will stand comparison with the achievements of theoretical physics.