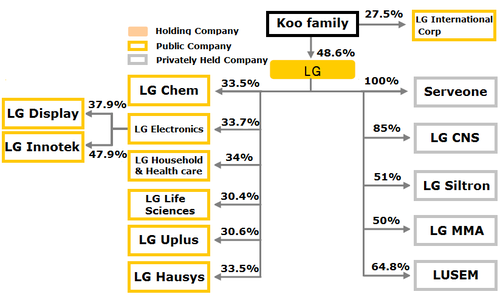 Stake ownership structures (As of 2012[update]) 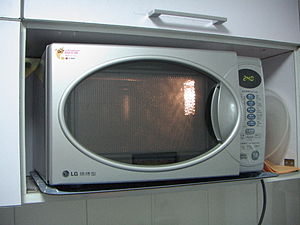 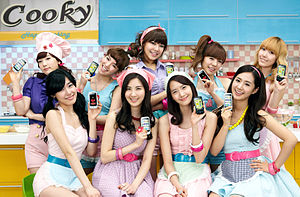 LG's ad campaigns have sometimes utilized celebrities such as South Korean pop girl group Girls' Generation for their products, such as this for the LG Cookie cell phone in 2010. 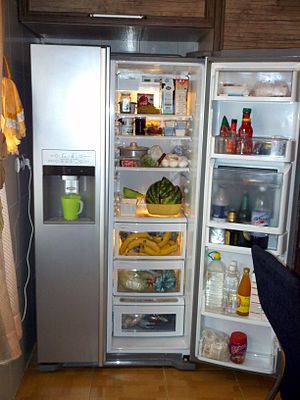 GoldStar produced South Korea's first radio. Many consumer electronics were sold under the brand name GoldStar, while some other household products (not available outside South Korea) were sold under the brand name of Lucky. The Lucky brand was famous for hygiene products such as soaps and HiTi laundry detergents, but the brand was mostly associated with its Lucky and Perioe toothpaste. Even today, LG continues to manufacture some of these products for the South Korean market, such as laundry detergent.

In 1995, to compete better in the Western market, the Lucky-Goldstar Corporation was renamed "LG". The company also associates the letters LG with the company's tagline "Life's Good". Since 2009, LG has owned the domain name LG.com.

Since 2001, LG has two joint ventures with Royal Philips Electronics: LG Philips Display and LG Philips LCD, but Philips sold off its shares in late 2008.[4] In 2005, LG entered into a joint venture with Nortel Networks, creating LG-Nortel Co. Ltd.

On 30 November 2012, comScore released a report of the October 2012 U.S. Mobile Subscriber Market Share that found LG lost its place as second in the U.S. mobile market share to Apple Inc.[5]

The company logo of LG features a circle containing the letters "L" and "G", presented in the form of a smiling human face.[8][9]

LG has owned the LG Twins and Changwon LG Sakers.