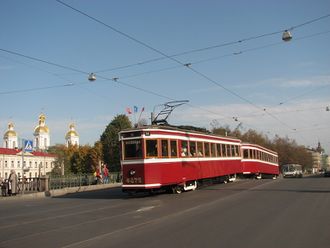 LM-33 and LP-33 tram at Staro-Nikolsky bridge in Saint Petersburg.

LM-33 is a Soviet tram with 4 axles, produced by Leningradskiy vagonoremontny plant from 1933 to 1939.

In the early 1930s, D. I. Kondratiev and a group of Leningrad specialists visited America to learn about local developments. A new model of the Leningrad tram was derived from this research trip based on the Peter Witt design. The design was modified in accordance with Soviet domestic requirements; in particular, the width of the wagon was reduced. The first tram on this design was produced at the Leningradsky vagonoremontny plant. It was originally named MA (Motorny Amerikanskogo tipa), and its unpowered trailer was named PA (Pritsepnoy Amerikanskogo tipa). The model quickly earned the nickname "American". Later for political reasons, the wagon names were changed to LM-33 (Leningradsky Motorny projekta 1933 goda) and LP-33 (Leningradsky Pritsepnoy projekta 1933 goda), respectively.