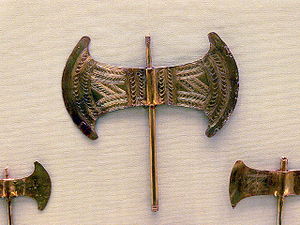 Labrys (Greek: λάβρυς, lábrys) is the term for a symmetrical double-bitted axe originally from Crete in Greece, one of the oldest symbols of Greek civilization; to the Romans, it was known as a bipennis.[1] The symbol was commonly associated with female divinities.

The double-bitted axe remains a forestry tool to this day,[2] and the labrys certainly functioned as a tool and hewing axe[3] before it was invested with symbolic function.[4] Labrys symbolism is found in Minoan, Thracian, and Greek religion, mythology, and art, dating from the Middle Bronze Age onwards, and surviving in the Byzantine Empire.

Plutarch relates the word labrys with a Lydian word for "axe": (Λυδοὶ γὰρ ‘λάβρυν’ τὸν πέλεκυν ὀνομάζουσι).[5] R. S. P. Beekes rejected an Indo-European etymology and proposed a Pre-Greek one; he also suggested that labrys has the same root as labyrinthos.[6]

Labrys was a cult-word that was introduced from Anatolia, where such symbols have been found in Çatal Höyük from the neolithic age.[citation needed] In Labraunda of Caria the double-axe accompanies the storm-god Zeus Labraundos.[7] In Crete, the symbol of the double-axe always accompanies goddesses, and it seems that it was the symbol of the beginning (arche) of the creation. The word labyrinth, which the Greeks used for the palace of Knossos is possibly derived from labrys.[8] It seems that the goddess of the double-axe presided over the Minoan palaces, and especially over the palace of Knossos. The Linear B (Mycenaean) inscription 𐀅𐁆𐀪𐀵𐀍𐀡𐀴𐀛𐀊, on tablet ΚΝ Gg 702, is interpreted as da-pu2-ri-to-jo-po-ti-ni-ja (labyrinthoio potnia, "Mistress of the labyrinth), and she was undoubtedly the goddess of the palace.[9][10]

However the designation "The house of the Double Axe" cannot be limited to the palace of Knossos, because the same symbols were discovered in other palaces of Crete.[11]

The priests at Delphi in classical Greece were called Labryades (the men of the double axe). Evans' article supplies the first citation of the word in the Oxford English Dictionary (OED).

Bronze axe from the Mesara tombs

The Labrys is most closely associated in historical records with the Minoan civilization which reached its peak in the 2nd millennium BC, and specifically with the worship of a goddess. In Crete the symbol always accompanies female divinities and it was probably the symbol of the arche of the creation (Mater-arche:matriarchy).[12] 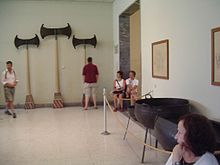 Double axes taller than a human

Some Minoan labrys have been found which are taller than a human and which might have been used during sacrifices. The sacrifices would likely have been of bulls. The bull and double-axe are seen in Çatalhöyük as well,[13] which existed from 7500 BC to 5700 BC. The labrys symbol has been found widely in the Bronze Age archaeological recovery at the Palace of Knossos on Crete.[14] According to archaeological finds on Crete this double-axe was used specifically by Minoan priestesses for ceremonial uses.[citation needed] Sometimes the double-axe is combined with the sacral-knot which seems that was a symbol of holiness. Such symbols have been found in Crete, and also on some goldrings from Mycenae.[15]

Several double axes were found at the Arkalochori cave in Crete, with inscriptions in the Linear A script. A golden axe assumed to be from Alkalochori is now exhibited in the Museum of Fine Arts in Boston.[16] Among the double axes, the second-millennium bronze Arkalochori Axe with an inscription was excavated by Marinatos in 1934. It has been suggested that these might be Linear A but it seems that "the characters on the axe are no more than a 'pseudo-inscription' engraved by an illiterate in uncomprehending imitation of authentic Linear A characters on other similar axes."[17]

In the Near East and other parts of the region, eventually axes of this sort are often wielded by male divinities and appear to become symbols of the thunderbolt.[18] In Labraunda of Caria the double-axe accompanies the storm-god Zeus Labraundos. Similar symbols have been found on plates of Linear pottery culture in Romania.[19]

The double-axe is associated with the Hurrian god of sky and storm Teshub. His Hittite and Luwian name was Tarhun.[20] Both are depicted holding a triple thunderbolt, and a double axe on the other hand.[21] Similarly, Zeus throws his Keravnos to bring storm. The labrys, or pelekys, is the double axe Zeus uses to invoke storm, and the relative modern Greek word for lightning is star-axe (ἀστροπελέκι astropeleki)[22] The worship of it was kept up in the Greek island of Tenedos and in several cities in the south-west of former Hellenic Asia Minor, and it appears in later historical times in the cult of the thundergod of Asia Minor (Zeus Labrayndeus).

In feminist interpretations, it is a symbol of matriarchy.[23] It may also be interpreted as a butterfly based on the Minoan butterfly goddesses shown in the shape of a labrys. The double-axe is also associated with the Greek fire god Hephaestus, so to the Minoans the labrys may have been associated with a fire goddess, possibly similar to Hestia.

The word labyrinthos (Mycenaean daburinthos[24]) is possibly connected with the word labrys.[8] In the Linear B (Mycenean Greek) script a symbol similar to a double-axe represents the phonetic sign a.[25] In the context of the Classical Greek myth of Theseus, the labyrinth of Greek mythology is frequently associated with the Minoan palace of Knossos and has a long tradition of use that extends before any written records explain the traditions.

On Greek vase paintings, a labrys sometimes appears in scenes of animal sacrifice, particularly as a weapon for the slaying of bulls.

On the "Perseus Vase" in Berlin (F1704; ca 570–560 BC), Hephaestus ritually flees his act of slicing open the head of Zeus to free Athena whose pregnant mother Zeus swallowed to prevent her offspring from dethroning him. Over the shoulder of Hephaestus is the instrument he has used, the double-headed axe. The more usual double-headed instrument of Hephaestus is the double-headed smith's hammer so the symbolism is important. Zeus swallowing the goddess symbolized the progressive suppression of the earlier traditional religious beliefs, symbolically dethroning the goddess, Metis, but allowing Athene (her daughter) to be "born" of Zeus because her worship was so pervasive and widespread that it could not be suppressed. That is likely the reason the labrys was depicted as the instrument used by Hephaestus (who much earlier had been a consort of the Earth goddess) to release Athene.

On Greek coins of the classical period (e.g. Pixodauros, etc.) a type of Zeus venerated at Labraunda in Caria that numismatists call Zeus Labraundeus (Ζεὺς Λαβρανδεύς) stands with a tall lotus-tipped sceptre upright in his left hand and the double-headed axe over his right shoulder.

The double-axe also appears in Thracian art. On the Aleksandrovo kurgan fresco, it is probably wielded by Zalmoxis.

The labrys symbolizes a variety of modern pagan and women's movements

While double axes are common in high fantasy settings, in reality, they were not commonly used in combat.

The labrys was formerly a symbol of Greek fascism.[26] During the period of the 4th of August Regime (1936–1941), the labrys was used as the main symbol of the regime-sponsored National Organisation of Youth (EON),[26] as its leader, Ioannis Metaxas believed the symbol to be the first symbol of all Hellenic civilizations. In the 1960s the labrys was also used by the Italian neo-fascist and far-right movement Ordine Nuovo, most prominently on their flag. Today it is sometimes used as a symbol of Hellenic Polytheistic Reconstructionism.

Further, it is used by Cretan folklore preservation societies and associations both in Greece and abroad, on occasion with the modern Greek spelling "lavrys". The labrys also has been used since the 1970s[27][28] as a lesbian,[28] feminist,[29] and goddess movement symbol to represent women's strength and self-sufficiency.[30][better source needed]