The Lada Niva or VAZ-2121 (Russian: Лада Нива; Niva (нива) is the Russian word for "crop field") is an off-road vehicle produced by the Russian (former Soviet) manufacturer AvtoVAZ. It was also marketed as the Lada Sport in Iceland,[3] Lada Taiga in Austria, Bognor Diva in Uruguay, the Lada Cossack in Britain,[4] and is offered since 2009 on most markets as the Lada 4x4.

It was the first mass production off-road vehicle to feature a unibody architecture, independent front suspension with coil springs, and is a predecessor to current crossover SUVs which nearly all follow this format; it inspired the Suzuki Vitara.[5] Pickup and emergency van versions are produced by VAZInterService.

The Niva (VAZ-2121) was described by its designers as a “Renault 5 put on a Land Rover chassis.”[6] Development began in 1971, when a team of VAZ designers under Vladimir Solovyev began work on a "civilized" four-wheel drive vehicle.[7] It was inspired in part by the IZh-14 prototype of 1974.[8] It was VAZ's first non-Fiat based model. Much of its mechanicals are carried over from the Fiat 124-based Lada models, though the body, four-wheel drive system, and front suspension were designed by VAZ. The first prototypes appeared in 1971 and 1972, but were rejected as too utilitarian, so doors and hardtop were added; this version debuted in 1973.[9] This took inspiration from the VAZ-1101, and was created by designer Valery Pavlovitch.[9] The engine was changed to a 1,568 cc (95.7 cu in) from the VAZ-2106, with permanent four-wheel drive and locking differentials.[9] On trials during 1973 and 1974, it showed it could climb a 58° slope or ford 60 cm (24 in) of water or 100 cm (39 in) of snow.[9] It was approved for production in 1977 as the Niva (Field).[9] 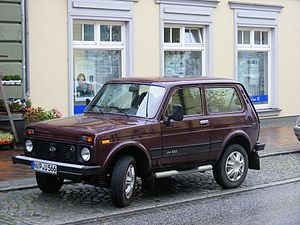 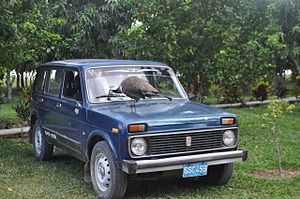 In basic form, the Niva has a carbureted 1.6-litre overhead cam four-cylinder petrol engine producing 54 kW (72 hp) and 126 N·m (93 lb·ft), a four- or five-speed manual transmission, and full-time four-wheel drive. The four-wheel drive system employs three differentials (centre, front and rear). The transfer case involves a high/low range selector lever and a central differential lock lever. Low range can be selected with the centre differential locked or unlocked. The original Niva had a maximum speed of 81 mph (130 km/h),[9] and can cruise at 90 km/h (56 mph) while consuming petrol at 8.25 L/100 km (34.2 mpg-imp; 28.5 mpg-US). Its towing capacity is rated for up to 860 kg (1900 lb). It debuted in Western Europe at the 1978 Paris Motor Salon, and rapidly captured forty percent of Europe's market for four-wheel drive vehicles,[9] making it Lada's top-selling export.[10] Because of export demand, and higher priority for exports, domestic customers faced long waiting lists.[9] A 1.7-litre petrol engine was introduced later in production, as was single-point fuel injection supplied initially by General Motors. Around this time the rear hatch was revised to have a lower opening. Multi-point fuel injection designed by Bosch is used currently since 2004. In some markets a 1.9L Peugeot XUD diesel powered Niva was sold.

Coil springs are located at each of the four wheels, and suspension is independent in front, whereas the rear axle is a 5 link live-type, with ratios between 3.90 and 4.30 depending on the model and market. Ground clearance is good at 235 mm (9.25 in) and water 510 mm (20 in) deep can be negotiated.

The brakes (disc front, drum rear) are servo-assisted dual-circuit style and the clutch is hydraulic. The turning circle is a relatively low 36.25'. Cargo space is 0.48 m³ (17 ft³), or 1.33 m³ (47 ft³) with the rear seats folded down. A spare tyre is located in the engine bay under the bonnet. The latter feature is considered a useful and practical feature by off-road fans.

A soft top version appeared in 1983, bodied by French coachbuilder Wassermann;[5] this was known as the Niva Plein Soleil (Sunlight).[11]

In 1985, the transmission was changed to a five-speed; because the transfer case is a separate unit, it remains very noisy and creates excessive vibration.[5] During the 1980s local Lada importers in various markets made their own upgrades to help compete with more modern SUVs. In the UK the Cossack model featured large body decals, roof rails, running boards, 15" alloy wheels, and on some versions a sunroof, steel bullbars, spotlights, a rear-mounted spare tyre and semi-bucket seats. Other markets' importers made similar upgrades and many were also called Cossack.

In 1995, Lada UK introduced a face-lifted version of the Niva Cossack and renamed the basic model as the Hussar. Whereas the Hussar had the original 1977 trim, the new UK Cossack featured a new Rover-designed grille and other body kit items, and gained soft nudge-bars at the front in deference to public opinion against bullbars. Both models received the same new 1.7-litre engine and a new deeper tailgate which extended the rear opening to the level of the bumper - a vast improvement over the original model's high lip. Official Niva imports to the UK ceased in 1997 due to the importers having difficulty in sourcing the GM fuel injection unit required to satisfy ever-tightening UK emissions regulations.

There were several attempts to reintroduce Ladas back into the UK. In May 2010, the basic Niva became available again, through an independent importer. Aimed largely at the agricultural market, three models were made available (all LHD), the 3-door 4-seat hatchback at £10,000, a 2-seat commercial van, £8000 and a 2-door, 4-seat pickup for £12,000. All meet the current UK Vehicle Certification Agency standards. The only engine available is the 1.7 litre petrol, but this can be provided with or without a LPG conversion.[12] 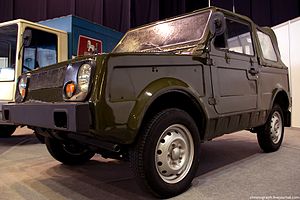 Six evolutions of prototypes were built, and much development work was done. The car was tested in an experimental military unit, on the proving grounds of the Ministry of Defence, and in the Turkmenistan Karakum Desert. VAZ-2122 received very positive feedback, by 1987 VAZ had finished all development work, and the car was ready for production.

However, at the end of the 1980s, the Ministry of Defence did not have the financial resources necessary for large-scale purchases of the VAZ-2122. As a result, it was never put into mass production. 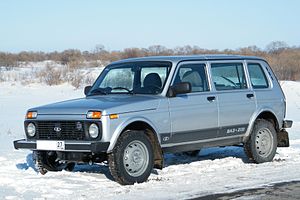 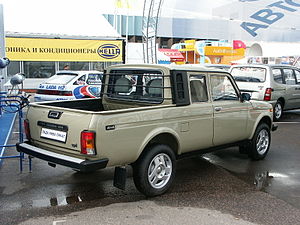 The Lada Niva was renamed the Taiga and it continued to be offered with a low-range gearbox, differential lock, ABS, underbody protection and more. Prices for the model started at €10,990. The Taiga would be available in five body styles; 3-door SUV, 5-door SUV, 2-door Pickup, 4-door Pickup and van. Two petrol engines are available for the model, a 1.6L and a 1.7L, along with two transmissions, a 4-speed or a 5-speed manual.[15][16]

Starting 2014 model year, the "Niva" nameplate was discontinued for the Russian market, and the vehicle is currently branded as "Lada 4x4" for both short and long wheelbases. This was done to make way for the upcoming restart of the Chevrolet Niva series, which was slated to start production by March 2015. However, due to the current economic situation in Russia-West relations, AvtoVAZ analysts have suggested that the production of Chevrolet Niva may indeed get delayed furthermore into 2015, especially considering any upcoming automotive sanctions packages against Russia. AvroVAZ currently plans in keeping the Lada 4x4/Niva for its domestic market, branding it as economy class SUV.

Uses of the Niva

In Russia and Europe the Niva has been used as an ambulance, a military vehicle, and by various police forces (e.g. Czech Republic) and utility companies (e.g. Manx Electricity Board). It also saw service for a time as a vehicle for lifeguards on beaches in the Netherlands. 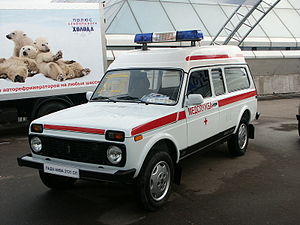 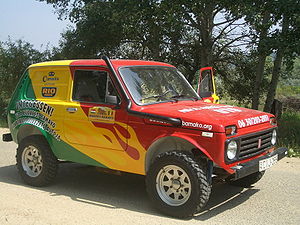 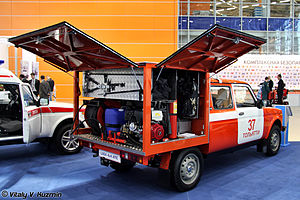 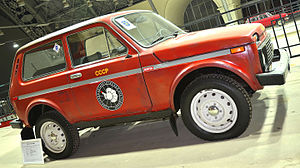 Transmanche-Link, the commercial consortium that built the Channel Tunnel between England and France, used a fleet of 45 Nivas to aid in the enormous project. Each Niva accumulated in excess of 70,000 kilometres (43,000 mi) off-road during its employment, and after construction had been completed in 1993, the fleet was sold off to a local dealer.

Nivas have been driven on land, up mountains, through mud, and underwater.

It was the first wheeled vehicle to spend more than ten years in Antarctica, where it was used by the Russian (formerly Soviet) Antarctic Expedition for transportation of personnel and goods, communication between Antarctic stations, towing boats and where it covered more than 40,000 km (24,855 miles) in the years 1990-2001.[17]

As of early January 2013, a Niva became the symbol of the opposition's Resistance movement in Republic of Macedonia.[dubious – discuss] Nivas can be seen in almost all public gatherings organized by the movement.[18]

Car manufacturer Bognor in Uruguay assembled a version of the Niva, called Bognor Diva, released in 2004.

In Greece, the Automeccanica car maker assembled different versions of the Lada Niva in the late 1980s and early 1990s, including an in-house developed cabrio version.[19] 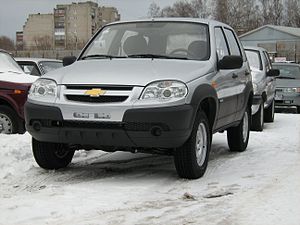 GM-AvtoVAZ, a joint venture between AvtoVAZ and General Motors, produces the Chevrolet Niva. The car was previously known as the VAZ-2123 in the design stage. It features an updated body and 1.7-litre gasoline engine with fuel injection. Although the body and the interiors are new, it is still based on the old VAZ 2121 engine, transmission and most mechanicals. Its off-road ability is exemplary compared with many modern budget SUVs, having been designed for tough tundra territory. 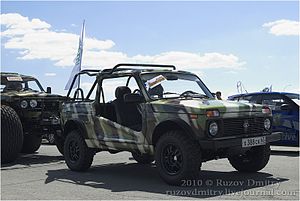 Vehicles based on the Niva 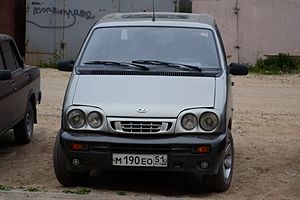 The car can be equipped with a voltage converter 12 -> 220, to supply various medical equipment; additional electric heater med salon.

A notable Niva buyer in May 2009 was Russia's then-premier Vladimir Putin.[23] He flaunted his camouflage-painted Opel-engined offroader in the Russian media, allegedly to support domestic car producers despite the financial crisis.[24][25]