Lada Sport is a Russian marketing, advertising and engineering company based in Togliatti and it is a 100% subsidiary of AvtoVAZ. It is manufacturing the Lada Granta sport and Lada Kalina sport road models and also run the Lada works team in the World Touring Car Championship (WTCC). Their first season was the 2009 season (ran by Russian Bears Motorsport team).

The team entered the 2009 World Touring Car Championship season, becoming the fourth manufacturer in the championship alongside SEAT, BMW and Chevrolet. The introduction of the new Priora at Porto and the addition of former British Touring Car Champion James Thompson to the driver lineup helped the team to increase their competitiveness during the season. Drivers points were achieved by Thompson for a pair of 6th places at the Imola round. 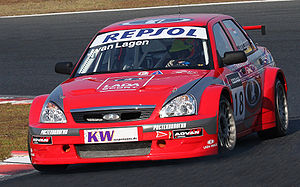 After taking part in two events in 2012 with a single Granta Sport car driven by WTCC race winner James Thompson, the Lada Sport team field two cars in the 2013 season, one for Thompson and one for Russian driver Mikhail Kozlovskiy. The team have secured the precious collaboration of French outfit Oreca for the technical development of the chassis and the 1.6-litre turbo engine. On top of this the programme is supported by Lukoil Racing, Russia’s major oil company.

† Driver did not finish the race, but was classified as they completed over 90% of the race distance.