The Lada Vesta is a small family car produced by the Russian car company AvtoVAZ since 2015.[5] Designed by Steve Mattin, it was presented in August 2014 during the Moscow International Automobile Salon[6] and went into mass production on 25 September 2015 in Izhevsk.[7] Within days after the Lada Vesta went on sale in November, it became one of the best-selling cars in the Russian market.[8]

Production of the Vesta started on 25 September 2015 at AvtoVAZ's Izhevsk manufacturing site. The first mass production Lada Vesta was a car of the Comfort trim-level, equipped with a 1.6-litre engine and a manual transmission. Sales started on 25 November 2015. The car is one of carmaker's flagship models.[11] 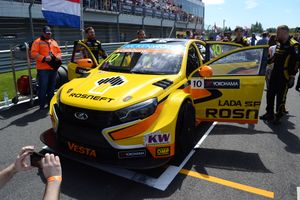 In March 2015, Lada grabbed the pole position for Race 2 of the Argentina WTCC, with a Rosneft Vesta TC1.[12]