Lakehead Technical Institute was established on June 4, 1946, by an Order-in-Council of the Province of Ontario. Classes commenced in January 1948, in temporary rented quarters in downtown Port Arthur. In September of that same year, the first university courses were added to the curriculum.[4]

The original college site comprised some 32 hectares of land in south-west Port Arthur, Ontario. From 1962 to 1965, an additional 87 hectares of adjoining land were purchased in anticipation of future expansion. The first building was opened in 1957. 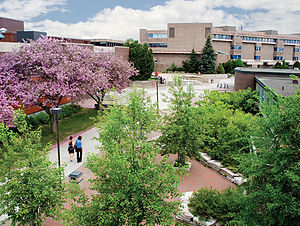 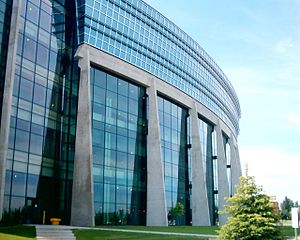 In 2005 the Northern Ontario School of Medicine (NOSM) was formed as a joint initiative between Lakehead University and Laurentian University in Sudbury. NOSM is organised within the Faculty of Medicine of both Laurentian (East Campus) and Lakehead (West Campus) universities. The medical school has multiple teaching and research sites across Northern Ontario, including large and small communities. Students are given a choice of attending either one of the two main NOSM campuses. NOSM is the only Canadian medical school to be established as a stand-alone not-for-profit corporation, with its own Board of Directors and corporation bylaws.

A new law school was established; the faculty accepted its first students in 2013.[7] The program is housed in the former Port Arthur Collegiate Institute. In 2014 it was named the Bora Laskin Faculty of Law, after the fourteeenth Chief Justice of the Supreme Court of Canada.

Lakehead University's physical plant now consists of 39 buildings and 116 hectares of property including 40 hectares of landscaped and maintained grounds.

Lakehead University opened a campus in Downtown Orillia in 2006, and in September 2010 expanded to its new 500 University Avenue location. A new academic building at this site represents the first phase in the development of Canada’s first Leadership in Energy and Environmental Design (LEED) Platinum university campus. A 271-bed student residence building and a cafeteria/bookstore facility opened in November 2012 at the University Avenue site.

Accommodations at Lakehead are divided into three living styles: residence halls, apartments and townhouses. The Thunder Bay residence currently has a total of 1,196 beds and three cafeteria/dining halls. Students can choose from meal options that range from kitchenette, full-kitchen and complete meal plan depending on the residence styles.

The men's residence for 52 students was opened in fall of 1962, and has grown to include a residence village consisting of 10 new buildings. The village is situated on the banks of the McIntyre River within easy 5-minute walking distance of all university buildings and athletic facilities.

From 1989 to 1992, a complex of townhouses marked the newest addition to the residence facility that includes handicap accessible units. 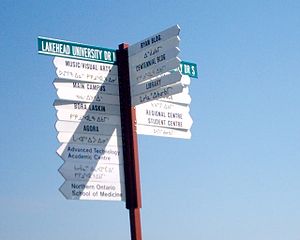 A bilingual sign. The languages are English and Anishinaabe.

Apart from these awards, Lakehead University provides entrance scholarships to high school students with marks above 80%, paid out during four years of undergraduate. Lakehead also offers free tuition to students with a 95% average or higher.[11]

Lakehead University Student Union, or LUSU, serves as a governing body for student-run clubs. Students can participate in various activities in numerous clubs ranging from student government to multi-cultural and athletics. LUSU is also responsible for publishing the student newspaper, The Argus, as well as running The Study Coffeehouse and The Outpost Pub. These sites serve as gathering places for many campus community activities and as performance venues.