From Infogalactic: the planetary knowledge core
Jump to: navigation, search
This article is about Tibetan Buddhist teachers. For other uses of the word, see Lama (disambiguation).
Not to be confused with Llama. 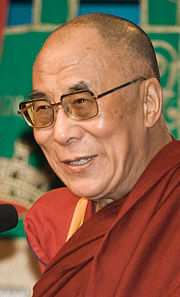 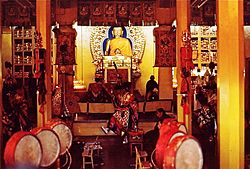 Lama (Tibetan: བླ་མ་, Wylie: bla-ma; "chief" or "high priest"[1]) is a title for a teacher of the Dharma in Tibetan Buddhism. The name is similar to the Sanskrit term guru.[2]

Historically, the term was used for venerated spiritual masters[3][4] or heads of monasteries.[2] Today the title can be used as an honorific title conferred on a monk,[2][4] nun or (in the Nyingma, Kagyu and Sakya schools) advanced tantric practitioner to designate a level of spiritual attainment and authority to teach, or may be part of a title such as Dalai Lama[4] or Panchen Lama[4] applied to a lineage of reincarnate lamas (Tulkus).

Perhaps due to misunderstandings by early western scholars attempting to understand Tibetan Buddhism, the term lama has historically been erroneously applied to Tibetan monks in general. Similarly, Tibetan Buddhism was referred to as "Lamaism"[2] by early western scholars and travelers who perhaps did not understand that what they were witnessing was a form of Buddhism;[2] they may also have been unaware of the distinction between Tibetan Buddhism and Bön. The term Lamaism is now considered by some to be derogatory.[5]

In the Vajrayana path of Tibetan Buddhism, the lama is often the tantric spiritual guide, the guru to the aspiring Buddhist yogi or yogini. As such, the lama will then appear as one of the Three Roots (a variant of the Three Jewels), alongside the yidam and protector (who may be a dakini, dharmapala or other Buddhist deity figure).