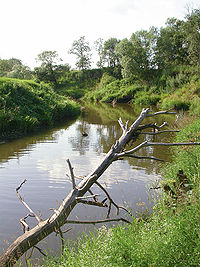 A picture of the river

Lama River (Russian: Ла́ма) is a river in the Moscow and Tver Oblasts in Russia, a tributary of the Shosha River. The river is 139 kilometres (86 mi) long. The area of its drainage basin is 2,330 square kilometres (900 sq mi). The Lama River freezes up in November and stays under the ice until late March or early April. Historically, the river was a part of the important waterway from the Volga River to the Moskva River. The city of Volokolamsk that has been standing on the Lama River since the 12th century was previously known as Volok Lamsky (literally - Drag of Lama) after the process of a watercraft portage.