In a number of other jurisdictions, including parts of the United States,[1] the term "reclamation" can refer to returning disturbed lands to an improved state. In Alberta, Canada, for example, reclamation is defined by the provincial government as "The process of reconverting disturbed land to its former or other productive uses."[2] In Oceania it is frequently referred to as land rehabilitation.

Land reclamation can be achieved with a number of different methods. The most simple method involves simply filling the area with large amounts of heavy rock and/or cement, then filling with clay and dirt until the desired height is reached. The process is called "infilling"[3] and the material used to fill the space is generically called "infill".[4][5] Draining of submerged wetlands is often used to reclaim land for agricultural use. Deep cement mixing is used typically in situation in which the material displaced by either dredging or draining may be contaminated and hence needs to be contained.

The entire East Coast Park in Singapore was built on reclaimed land with a man-made beach.
File:Satellite image of Flevopolder, Netherlands (5.48E 52.43N).png
The Flevopolder in the Netherlands, reclaimed from the IJsselmeer, is the largest reclaimed artificial island in the world. 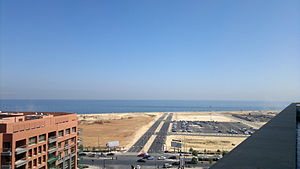 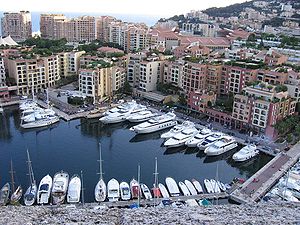 The whole district of Fontvieille, Monaco was reclaimed from the sea

The creation of new land was for the need of human activities.

One of the earliest large scale projects was the Beemster Polder in the Netherlands, realized in 1612 adding 70 square kilometres (27 sq mi) of land. In Hong Kong the Praya Reclamation Scheme added 20 to 24 hectares (50 to 60 acres) of land in 1890 during the second phase of construction. It was one of the most ambitious projects ever taken during the Colonial Hong Kong era.[8] Some 20% of land in the Tokyo Bay area has been reclaimed,[9] most notably Odaiba artificial island. Le Portier, Monaco and Gibraltar are also expanding due to land reclamation. The city of Rio de Janeiro was largely built on reclaimed land, as was Wellington, New Zealand. 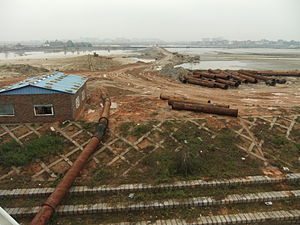 Agriculture was a drive for land reclamation before industrialisation.[10] In South China, farmers reclaimed paddy fields by enclosing an area with a stone wall on the sea shore near river mouth or river delta. The species of rice that grow on these grounds are more salt tolerant. Another use of such enclosed land is creation of fish ponds. It is commonly seen on the Pearl River Delta and Hong Kong. These reclamation also attracts species of migrating birds.

A related practice is the draining of swampy or seasonally submerged wetlands to convert them to farmland. While this does not create new land exactly, it allows commercially productive use of land that would otherwise be restricted to wildlife habitat. It is also an important method of mosquito control.

Even in the post-industrial age, there have been land reclamation projects intended for increasing available agricultural land. For example, the village of Ogata in Akita, Japan, was established on land reclaimed from Lake Hachirogata (Japan's second largest lake at the time) starting in 1957. By 1977, the amount of land reclaimed totalled 172.03 square kilometres (66.42 sq mi).[11]

Beach rebuilding is the process of repairing beaches using materials such as sand or mud from inland. This can be used to build up beaches suffering from beach starvation or erosion from longshore drift. It stops the movement of the original beach material through longshore drift and retains a natural look to the beach. Although it is not a long-lasting solution, it is cheap compared to other types of coastal defences.

As human overcrowding of developed areas intensified during the 20th century, it has become important to develop land re-use strategies for completed landfills. Some of the most common usages are for parks, golf courses and other sports fields. Increasingly, however, office buildings and industrial uses are made on a completed landfill. In these latter uses, methane capture is customarily carried out to minimize explosive hazard within the building.

An example of a Class A office building constructed over a landfill is the Dakin Building at Sierra Point, Brisbane, California. The underlying fill was deposited from 1965 to 1985, mostly consisting of construction debris from San Francisco and some municipal wastes. Aerial photographs prior to 1965 show this area to be tidelands of the San Francisco Bay. A clay cap was constructed over the debris prior to building approval.[12]

A notable example is Sydney Olympic Park, the primary venue for the 2000 Summer Olympic Games, which was built atop an industrial wasteland that included landfills.

Another strategy for landfill is the incineration of landfill trash at high temperature via the plasma-arc gasification process, which is currently used at two facilities in Japan, and will be used at a planned facility in St. Lucie County, Florida.[13]

File:Bay area fill.jpg
Parts (highlighted in brown) of the San Francisco Bay were reclaimed from wetlands for urban use.

Draining wetlands for ploughing, for example, is a form of habitat destruction. In some parts of the world, new reclamation projects are restricted or no longer allowed, due to environmental protection laws. 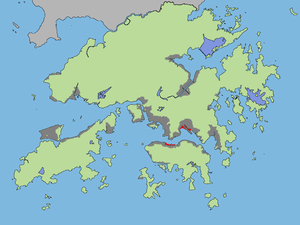 Hong Kong legislators passed the Protection of the Harbour Ordinance, proposed by the Society for Protection of the Harbour, in 1997 in an effort to safeguard the increasingly threatened Victoria Harbour against encroaching land development.[14] Several large reclamation schemes at Green Island, West Kowloon, and Kowloon Bay were subsequently shelved, and others reduced in size.

Reclaimed land is highly susceptible to soil liquefaction during earthquakes,[15] which can amplify the amount of damage that occurs to buildings and infrastructure. Subsidence is another issue, both from soil compaction on filled land, and also when wetlands are enclosed by levees and drained to create Polders. Drained marshes will eventually sink below the surrounding water level, increasing the danger from flooding.

Praya Reclamation Scheme began in the late 1860s and consisted of two stages totaling 20 to 24 hectares (50 to 60 acres).[8] Hong Kong Disneyland, Hong Kong International Airport, and its predecessor, Kai Tak Airport, were all built on reclaimed land. In addition, much reclamation has taken place in prime locations on the waterfront on both sides of Victoria Harbour. This has raised environmental issues of the protection of the harbour which was once the source of prosperity of Hong Kong, traffic congestion in the Central district,[19] as well as the collusion of the Hong Kong Government with the real estate developers in the territory.[20][21]
In addition, as the city expands, new towns in different decades were mostly built on reclaimed land, such as Tuen Mun, Tai Po, Shatin-Ma On Shan, West Kowloon, Kwun Tong and Tseung Kwan O.