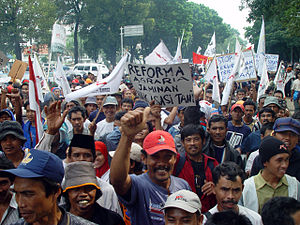 Land reform (also agrarian reform, though that can have a broader meaning) involves the changing of laws, regulations or customs regarding land ownership.[1] Land reform may consist of a government-initiated or government-backed property redistribution, generally of agricultural land. Land reform can, therefore, refer to transfer of ownership from the more powerful to the less powerful, such as from a relatively small number of wealthy (or noble) owners with extensive land holdings (e.g., plantations, large ranches, or agribusiness plots) to individual ownership by those who work the land.[2] Such transfers of ownership may be with or without compensation; compensation may vary from token amounts to the full value of the land.[3]

Land reform may also entail the transfer of land from individual ownership—even peasant ownership in smallholdings—to government-owned collective farms; it has also, in other times and places, referred to the exact opposite: division of government-owned collective farms into smallholdings.[4] The common characteristic of all land reforms, however, is modification or replacement of existing institutional arrangements governing possession and use of land. Thus, while land reform may be radical in nature, such as through large-scale transfers of land from one group to another, it can also be less dramatic, such as regulatory reforms aimed at improving land administration.[5]

Nonetheless, any revision or reform of a country's land laws can still be an intensely political process, as reforming land policies serves to change relationships within and between communities, as well as between communities and the state. Thus even small-scale land reforms and legal modifications may be subject to intense debate or conflict.[6]

Land ownership and tenure can be perceived as controversial in part because ideas defining what it means to access or control land, such as through "land ownership" or "land tenure", can vary considerably across regions and even within countries.[7] Land reforms, which change what it means to control land, therefore create tensions and conflicts between those who lose and those who gain from these redefinitions (see next section).[8]

Western conceptions of land have evolved over the past several centuries to place greater emphasis on individual land ownership, formalized through documents such as land titles.[9] Control over land, however, may also be perceived less in terms of individual ownership and more in terms land use, or through what is known as land tenure.[10] Historically, in many parts of Africa for example, land was not owned by an individual, but rather used by an extended family or a village community. Different people in a family or community had different rights to access this land for different purposes and at different times. Such rights were often conveyed through oral history and not formally documented.[11]

Terms dictating control over and use of land can therefore take many forms. Some specific examples of present day or historic forms of formal and informal land ownership include:

Land reform is a deeply political process[13] and therefore many arguments for and against it have emerged. These arguments vary tremendously over time and place. For example, in the twentieth century, many land reforms emerged from a particular political ideology, such as communism or socialism. Or, as can be seen in the 19th century in colonized states, a colonial government may have changed the laws dictating land ownership to better consolidate political power or to support its colonial economy.[14] In more recent times, electoral mobilization and the use of land as a patronage resource have been proposed as possible motivations for land reform efforts, such as the extensive redistributive land reforms of Robert Mugabe in Zimbabwe.[15]

Land reforms need not be as dramatic in scale as Zimbabwe. Today many arguments in support of land reform focus on its potential social and economic benefits, particularly in developing countries, that may emerge from reforms focused on greater land formalization. Such benefits may include eradicating food insecurity and alleviating rural poverty.[16]

Arguments in support of such reforms gained particular momentum after the publication of "The Mystery of Capital" by Peruvian economist Hernando de Soto in 2000. The poor, he argues, are often unable to secure formal property rights, such as land titles, to the land on which they live or farm because of poor governance, corruption and/or overly complex bureaucracies. Without land titles or other formal documentation of their land assets, they are less able to access formal credit. Political and legal reforms within countries, according to de Soto, will help to include the poor in formal legal and economic systems, increase the poor's ability to access credit and contribute to economic growth and poverty reduction.[18]

Many international development organizations and bilateral and multilateral donors, such as the World Bank, have embraced de Soto's ideas, or similar ideas, about the benefits of greater formalized land rights.[19] This has translated into a number of development programs that work with governments and civil society organizations to initiate and implement land reforms.[20] Evidence to support the economic and pro-poor benefits of increased formalized land rights are, however, still inconclusive according to some critics (see "Arguments against land reform" below).

Other arguments in support of land reform point to the need to alleviate conflicting land laws, particularly in former colonies, where formal and informal land systems may exist in tension with each other.[21] Such conflicts can make marginalized groups vulnerable to further exploitation.[22] For example, in many countries in Africa with conflicting land laws, AIDS stigmatization has led to an increasing number of AIDS widows being kicked off marital land by in-laws.[23] While the woman may have both customary and statutory rights to the land, confusion over which set of laws has primacy, or even a lack of knowledge of relevant laws, leave many AIDS widows at a significant disadvantage. Also, conflicting formal and informal land laws can also clog a country's legal system, making it prone to corruption.[24]

Additional arguments for land reform focus on the potential environmental benefits of reform. For example, if reform leads to greater security of land ownership, through either formal or informal means, then those that use the land will be better stewards of it.[25]

Many of the arguments in support of land reform speak to its potentially positive social and economic outcomes. Yet, as mentioned previously, land reform is an intensely political process.[8] Thus, many of those opposed to land reform are nervous as to the underlying motivations of those initiating the reform. For example, some may fear that they will be disadvantaged or victimized as a result of the reforms. Others may fear that they will lose out in the economic and political power struggles that underlie many land reforms.[26]

Other groups and individuals express concerns about land reforms focused on formalization of property rights. While the economic and social benefits of formalized land rights are often touted, some research suggests that such reforms are either ineffective or may cause further hardship or conflict.[27]

Additional arguments against land reform focus on concerns over equity issues and potential elite capture of land, particularly in regards to reforms focused on greater land formalization. If improperly or inadequately implemented, critics worry that such reforms may further disadvantage marginalization groups such as indigenous communities or women.[28] These concerns also lead to questions about the institutional capacity of governments to implement land reforms as they are designed. Even if a country does have this capacity, critics worry that corruption and patrimonalism will lead to further elite capture.[29]

In looking at more radical reforms, such as large-scale land redistribution, arguments against reform include concerns that redistributed land will not be used productively and that owners of expropriated land will not be compensated adequately or compensated at all. Zimbabwe, again, is a commonly cited example of the perils of such large-scale reforms, whereby land redistribution contributed to economic decline and increased food insecurity in the country.[30] In cases where land reform has been enacted as part of socialist collectivization, many of the arguments against collectivization more generally apply.

While many issues divide proponents and opponents of land reform, the questions below can help one to evaluate land reform in a more objective manner:

Agrarian land reform has been a recurring theme of enormous consequence in world history—see, for example, the history of the Semproninan Law or Lex Sempronia agraria proposed by Tiberius Sempronius Gracchus and passed by the Roman Senate (133 BC), which led to the social and political wars that ended the Roman Republic.

A historically important source of pressure for land reform has been the accumulation of significant properties by tax-exempt individuals or entities. In ancient Egypt, the tax exemption for temple lands eventually drove almost all the good land into the hands of the priestly class, making them immensely rich (and leaving the world a stunning legacy of monumental temple architecture that still impresses several millennia later), but starving the government of revenue. In Rome, the land tax exemption for the noble senatorial families had a similar effect, leading to Pliny's famous observation that the latifundia (vast landed estates) had ruined Rome, and would likewise ruin the provinces. In the Christian world, this has frequently been true of churches and monasteries, a major reason that many of the French revolutionaries saw the Catholic Church as an accomplice of the landed aristocracy. In the Muslim world, land reforms such as that organized in Spain by al-Hurr in 718 have transferred property from Muslims to Christians, who were taxable by much higher rates.

Nearly all newly independent countries of Eastern and Central Europe implemented land reforms in the aftermath of World War I. In most countries the land in excess of certain limit (ranging from 20 to 500 ha depending on the region and type of land) was expropriated, in Finland it was redeemed and placed into special fund.[32]

In the aftermath of colonialism land reform has occurred around the world, from the Mexican Revolution (1917; the revolution began in 1910) to Communist China to Bolivia (1952, 2006) to Zimbabwe and Namibia. Land reform has been especially popular as part of decolonization struggles in Africa and the Arab world, where it was part of the program for African socialism and Arab nationalism. Cuba has seen one of the most complete agrarian reforms in Latin America. Land reform was an important step in achieving economic development in many Third World countries since the post-World War II period, especially in the East Asian Tigers and "Tiger Cubs" nations such as Taiwan, South Korea, and Malaysia.

Since mainland China's economic reforms led by Deng Xiaoping land reforms have also played a key role in the development of the People's Republic of China, with the re-emergence of rich property developers in urban areas (though as in Hong Kong, land in China is not privately owned but leased from the state, typically on very long terms that allow substantial opportunity for private speculative gain).