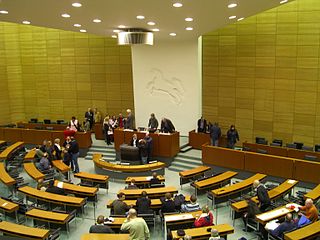 Floor of the Lower Saxony Landtag in Hanover, 2007

A Landtag (State Diet) is a representative assembly (parliament) in German-speaking countries with legislative authority and competence over a federated state (Land). Landtage assemblies are the legislative bodies for the individual states of Germany and states of Austria, and have authority to legislate in non-federal matters for the regional area.

The German word Landtag is composed of the words Land (state, country or territory) and Tag (day). The German word Tagung (meeting) is derived from the German word Tag, as such meetings were held at daylight and sometimes spanned over several days. The English word 'diet' likewise comes from Latin: dies (day).

In feudal society, the formal class system was reflected in the composition of the Imperial States' representative assemblies (Landstände), regardless of their name well described as estates of the realm: it was not intended as an elected reflection of public opinion, but a fixed expression of established power as recognized in formal privileges, including the right to be seated in person (granted to many nobles (knightage) and prelates, as well as certain cities) or to be represented as elector in a college that is entitled to one or more seats. Therefore, the representatives primarily defended class interests, and decisions were based on a class-based electoral system.

In some of the Imperial States that were known as Land, the name of such estates assembly was Landtag, analogous to the Reichstag (Imperial Diet), which mainly comprised most of the Princes of the Holy Roman Empire plus Reichsgrafen, Imperial prelates and Free imperial cities. The precise composition obviously varied greatly, and could change over time, as the result of privileges granted or lost, entities split or merged, border changes et cetera.

As Austria and Prussia escaped the French 'exporting the revolution', and Napoleon was happy to maintain satellite monarchies in most German territories under his control (members of the Confederation of the Rhine), the more democratic principles of the Enlightenment would have less effect in the German-speaking lands, or only much later.

The first constitution was passed in Nassau. Until 1841 (Luxembourg) all but 2 states got their constitution and parliaments.

1871 the German Empire was founded. All 25 states of the German Empire and the "Reichsland Elsaß-Lothringen" (since 1911) had Landtage as legislative authorities. The most important one was the Prussian Landtag.

1933 the Nazis abandoned the federal structure of the Weimar Republic and established a unitary state. The Landtage were abolished as a result.

The parliament of Finland, which was created when the country was ceded from Sweden to Russia in 1809, was called lantdag (Swedish for Landtag) until 1919, when Finland adopted its first constitution as an independent country (independence was declared in 1917). Since then, the official term in Swedish is riksdag, equivalent of the German Reichstag. The Finnish name is eduskunta.

The first Landtag of the Livonian Confederation was called by archbishop of Rīga Johannes Ambundii in 1419 and reconvened on a regular basis until the incorporation of Livonian lands into the Grand Duchy of Lithuania, Sweden and Denmark in 1561. Separate Landtags for Livonia, Courland and Estonia continued to exist as legislative authorities of the Duchies of Livonia, Estonia, Courland and Semigallia, and later the Russian Governorates of Livonia, Estonia and Courland.

In the contemporary Federal Republic of Germany, the Republic of Austria and the Italian Republic's province of South Tyrol (with a German-speaking majority), a Landtag is a unicameral legislature for a constitutive federal state (Bundesland). In the Principality of Liechtenstein, the Landtag is the sole national parliament, because Liechtenstein has no federal structure due to its size.

In most of the German constitutive federal states (Bundesländer), the unicameral legislature is called Landtag:

In the German capital and city state of Berlin, the legislature since 1951 (then of West Berlin) is called Abgeordnetenhaus ("House of Representatives"), adopting the tradition of the Prussian Landtag.

The national bicameral Parliament comprises the directly elected Bundestag and the Bundesrat which represents the state governments in Federal matters which affect the Länder.

See also: Distribution of seats in the Austrian Landtage 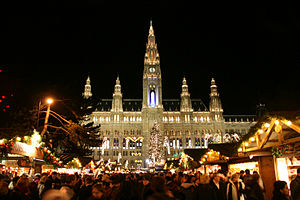 According to the Constitution of Austria, the Landtage are the unicameral legislatures of the nine states of Austria (Bundesländer), dealing with all matters not explicitly allotted to federal level:

As the Austrian capital Vienna (like Berlin) is both a city-state and a municipality, Landtag and Gemeinderat (municipal assembly) of Vienna are identical.

The representatives are elected in general, free, secret and direct ballots according to the principle of proportional representation. The largest of the parliamentary groups (called Klubs in Austria) usually nominates the Landeshauptmann governor. The modern Landtage are the democratic successors of the estates assemblies in the corresponding crown lands of the Austrian Empire. Exceptions are the city of Vienna, which belonged to the Lower Austria Kronland until 1920, and Burgenland, ceded to Austria by the Kingdom of Hungary in 1921.

Austria's national bicameral parliament consists of the directly elected National Council and the Federal Council, which represents the Landtage parliaments on the federal level. The two chambers meet in the Federal Assembly, held for the ceremonial swearing-in of the Austrian president.