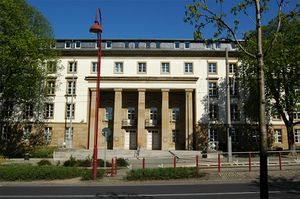 The Landtag of Thuringia is the state diet of the German federal state of Thuringia. It convenes in Erfurt and currently consists of 91 members of five Parties. Controversially[1] in December 2014, the Landtag elected first ever Left Party Minister-President, Bodo Ramelow.[2][3] The Left Party is seen as the successor to the Socialist Unity Party (SED) that ruled former East Germany. Ramelow heads a left-leaning coalition consisting of his Left Party, the Social Democratic Party (SPD) and the Greens, a so-called "red-red-green" coalition.[4] The primary functions of the Landtag are to pass laws, elect the Minister-President and control the government of Thuringia.

Elections are conducted using a proportional representation system, with a minimum of 5% vote share to receive any seats.