Several regional languages are also spoken to varying degrees as a secondary language after French, such as German dialects (Alsatian 1.44%), Celtic languages (Breton 0.61%) and other Gallo-Romance languages (Langues d'Oïl 1.25%, Occitan 1.33%). Some of these languages have also been spoken in neighbouring countries, such as Belgium, Germany, Switzerland, Italy or Spain.

The official language of the French Republic is French (art. 2 of the French Constitution) and the French government is, by law, compelled to communicate primarily in French. The government, furthermore, mandates that commercial advertising be available in French (though it can also use other languages); see Toubon Law. The French government, however, does not mandate the use of French by private individuals or corporations or in any other media.

A revision of the French constitution creating official recognition of regional languages was implemented by the Parliament in Congress at Versailles in July 2008.[3]

The 1999 Report written for the government by Bernard Cerquiglini identified 75 languages that would qualify for recognition under the government's proposed ratification of the European Charter for Regional or Minority Languages. 24 of those languages are indigenous to the European territory of the state while all the others are from overseas areas of the French Republic (in the Caribbean, Indian Ocean, Pacific Ocean and South America).

Although ratification was blocked by the Constitutional Council as contradicting the Fifth Republic's constitutional provision enshrining French as the language of the Republic, the government continues to recognise regional and minority languages to a limited extent (i.e. without granting them official status) and the Délégation générale à la langue française has acquired the additional function of observing and studying the languages of France and has had et aux langues de France added to its title. The category of languages of France (in French: langues de France) is thus administratively recognised even if this does not go so far as to provide any official status. Following his election as President, François Hollande reasserted in 2012 his campaign platform to ratify the European Charter and ensure a clear legal framework for regional languages (within a programme of administrative decentralisation that would give compentencies to the regions in language policy).[4]

The regional languages of France are sometimes called patois, but this term (roughly meaning "dialect") is often considered derogatory. Patois is used to refer to supposedly purely oral languages,[citation needed] but this does not, for instance, take into account that Occitan was already being written at a time when French was not and its literature has continued to thrive, with a Nobel Prize for Frédéric Mistral in 1904.

At the time of the French revolution in 1789 it is estimated that only half of the population of France could speak any French, and as late as 1871 only a quarter spoke French as their native language.[5]

The topic of the teaching of regional languages in public primary and secondary schools is controversial. Proponents of the measure state that it would be necessary for the preservation of those languages and to show respect to the local culture. Opponents contend that local languages are often non-standardised (thus making curricula difficult), of dubious practical usefulness (since most are spoken by a small number of people, without any sizable corpus of publications) and that the curriculum and funding of public schools are already too strained. The topic also leads to wider controversial questions of autonomy of the régions. Regarding other languages, English, Spanish, Italian and German are the most commonly studied foreign languages in French schools.

In April 2001, the Minister of Education, Jack Lang,[6] admitted formally that for more than two centuries, the political powers of the French government had repressed regional languages[citation needed], and announced that bilingual education would, for the first time, be recognised, and bilingual teachers recruited in French public schools.

Some of the languages of France are also cross-border languages (for example, Basque, Catalan, Corsican, Dutch, Franc-Comtois, Franco-Provençal, Norman, Picard, Occitan and others), some of which enjoy a recognised or official status in the respective neighbouring state or territory. French itself is also a cross-border language, being spoken in neighbouring Andorra, Belgium, Italy, Luxembourg, Monaco, and Switzerland. 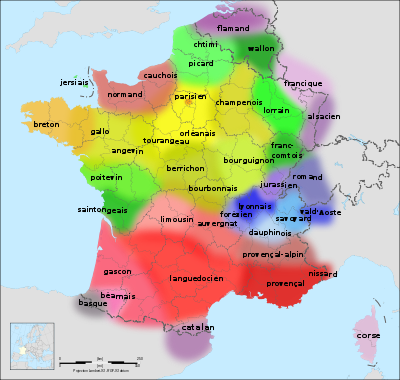 Geographical distribution of regional languages and dialects. (Note that French is spoken all over the country, including both Metropolitan France and DOMs-TOMs (not shown on this map).)

The regional languages of Metropolitan France include:

French Sign Language is also recognised as a language of France (with at least one regional variant in Provence).

A large number of immigrant languages are spoken in France, with a handful having a significant number of home speakers. (Figures as of 2000)[2]

They have sizable communities which speak these languages in France.

At the 1999 census, INSEE sampled 380,000 adult people all across Metropolitan France, and asked them questions about their family situation. One of the questions was about the languages that their parents spoke with them before the age of 5. This is the first time serious statistics were computed about the proportion of mother tongues in France. The results were published in Enquête familiale, Insee, 1999.[citation needed]

Here is a list of the nine most prominent mother tongues in France based on Enquête familiale.[citation needed]

If we add up people with mother tongue and people with some exposure to the language before the age of 5 (see note #3 below), then the five most important languages in metropolitan France are (note that the percentages add up to more than 100, because many people are now counted twice):

Notes on the table