Languages of the Caucasus 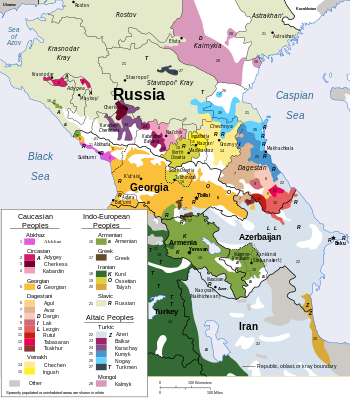 Ethnolinguistic groups in the Caucasus region

The Caucasian languages are a large and extremely varied array of languages spoken by more than ten million people in and around the Caucasus Mountains, which lie between the Black Sea and the Caspian Sea.

Linguistic comparison allows these languages to be classified into several language families, with little or no discernible affinity to each other. However, the languages of the Caucasus are sometimes mistakenly referred to as a family of languages.

Families indigenous to the Caucasus

Three of these families have no current members outside the Caucasus, and are considered indigenous to the area. The term Caucasian languages is generally restricted to these families, which are spoken by about 11.2 million people.

The autochthonous languages of the Caucasus share some areal features, such as the presence of ejective consonants and a highly agglutinative structure, and, with the sole exception of Mingrelian, all of them exhibit a greater or lesser degree of ergativity. Many of these features are shared with other languages that have been in the Caucasus for a long time, such as Ossetian.

Since the birth of comparative linguistics in the 19th century, the riddle of the apparently isolated Caucasian language families has attracted the attention of many scholars, who have endeavored to relate them to each other or to languages outside the Caucasus region. The most promising proposals are connections between the Northeast and Northwest Caucasian families and each other or with languages formerly spoken in Anatolia and northern Mesopotamia.

Linguists such as Sergei Starostin see the Northeast (Nakh-Dagestanian) and Northwest (Abkhaz–Adyghe) families as related and propose uniting them in a single North Caucasian family, sometimes called Caucasic or simply Caucasian. This theory excludes the South Caucasian languages, thereby proposing two indigenous language families. While these two families share many similarities, their morphological structure, with many morphemes consisting of a single consonant, make comparison between them unusually difficult, and it has not been possible to establish a genetic relationship with any certainty.

Alarodian is a proposed connection between Northeast Caucasian and the extinct Hurro-Urartian languages of Anatolia.

Linguists such as Sergei Starostin have proposed a Dené–Caucasian macrofamily, which includes the North Caucasian languages together with Basque, Burushaski, Na-Dené, Sino-Tibetan, and Yeniseian. This proposal is rejected by most linguists.

Other languages historically and currently spoken in the Caucasus area can be placed into families with a much wider geographical distribution.

The predominant Indo-European language in the Caucasus is Armenian, spoken by the Armenians (circa 4 million speakers). The Ossetians, speaking the Ossetian language, form another group of around 700,000 speakers. Other Indo-European languages spoken in the Caucasus include Greek (Pontic Greek), Persian (including Tat Persian), Kurdish, Talysh, Judeo-Tat, and the Slavic languages, such as Russian and Ukrainian, whose speakers number over a third of the total population of the Caucasus.

A dialect of Arabic known as Shirvani Arabic was spoken natively in parts of Azerbaijan and Dagestan throughout medieval times until the early 20th century.[1][2] In the nineteenth century, it was considered that the best literary Arabic was spoken in the mountains of Dagestan.[3]

The Kalmyk language, spoken by descendants of Oirat-speakers from East Asia, is a Mongolic language.