Lanoe George Hawker VC, DSO (30 December 1890 – 23 November 1916) was a British flying ace, with seven credited victories, during the First World War. He was the first British flying ace, and the third pilot to receive the Victoria Cross, the highest and most prestigious award for gallantry in the face of the enemy that can be awarded to British and Commonwealth forces. He was killed in a dogfight with the famous German flying ace Manfred von Richthofen ("The Red Baron").

Son of a distinguished military family, Hawker was born on 30 December 1890 at Longparish, Hampshire, England. Lanoe was sent to Stubbington House School and at the age of 11 to the Royal Navy College in Dartmouth, but although highly intelligent and an enthusiastic sportsman, his grades were disappointing.[citation needed] As a naval career became more unlikely, he entered The Royal Military Academy in Woolwich before joining the Royal Engineers, as an officer cadet. A clever inventor, Hawker developed a keen interest in all mechanical and engineering developments. During the summer of 1910 he saw a film featuring the Wright Flyer and after attending an aircraft flying display at Bournemouth, he quickly found an interest in aviation, learning to fly at his own expense at Hendon. On 4 March 1913, Hawker was awarded Aviator's Certificate No. 435 by the Royal Aero Club.

Promoted to 1st Lieutenant in October 1913 he was posted Cork Harbour with the 33rd Fortress Company.[1] His request for attachment to the Royal Flying Corps was granted and he reported to the Central Flying School at Upavon on 1 August 1914.[1]

Hawker was posted to France in October 1914, as a captain with No. 6 Squadron, Royal Flying Corps, flying Henri Farmans. The squadron converted to the B.E. 2c and he undertook numerous reconnaissance missions into 1915, being wounded once by ground fire. On 22 April he was awarded the Distinguished Service Order for attacking a German zeppelin shed at Gontrode by dropping hand grenades at low level (below 200 ft) from his B.E.2c. He used a tethered German balloon to help shield him from enemy ground fire as he made successive attacks. During the Second Battle of Ypres, Hawker was wounded in the foot by ground fire. For the remainder of the battle he had to be carried to and from his aircraft, but refused to be grounded until the fight was over.[citation needed]

Returning to 6 Squadron after hospitalisation, the squadron now received several single seat scouts, and some early F.E.2 'pushers'. One aircraft received was a Bristol Scout that Hawker, with assistance from Air Mechanic Ernest Elton (who later became an Ace Pilot himself), equipped with their design of Lewis gun mount, enabling the machine gun to fire forward obliquely at an angle, missing the propeller arc.[2]

While with No 6 squadron in 1915, Captain Hawker was a compatriot of Captain Louis Strange DSO OBE MC DFC*. The Squadron became pioneers of many aspects in military aviation at the time, driven largely by the imagination of Strange and the engineering talents of Hawker. Their talents led to various mountings for Lewis machine guns, one of which won Hawker the Victoria Cross, and one that nearly cost Strange his life.[3]

Hawker's innovative ideas at this time greatly benefited the still fledgling RFC. He helped to invent the Prideaux disintegrating link machine-gun belt feed, and initiated the practice of putting fabric protective coverings on the tips of wooden propellers, the use of fur-lined thigh boots, and devising a primitive 'rocking fuselage' for target practice on the ground. In 1916 he also developed (with W.L. French) the increased capacity 97-round 'double drum' for the Lewis machine gun. It was issued for trials in July and after modifications was issued generally to the RFC and RNAS.[4]

File:Lanoe Hawker's No 1611 Bristol Scout C.jpg
The Bristol Scout C, RFC serial no. 1611, flown by Hawker on 25 July 1915 in his Victoria Cross-earning engagement.

Following an initial air victory in June, on 25 July 1915 when on patrol over Passchendaele, Captain Hawker attacked three German aircraft in succession, flying Bristol Scout C, serial No. 1611. The first, after he had emptied a complete drum of bullets from his aircraft's single Lewis machine gun into it, went spinning down. The second was driven to the ground damaged, and the third – an Albatros C.I of FFA 3[5] – which he attacked at a height of about 10,000 feet, burst into flames and crashed. (Pilot Oberleutnant Uebelacker and observer Hauptmann Roser were both killed.) For this feat he was awarded the Victoria Cross.[6][7]

This particular sortie was just one of the many which Captain Hawker undertook during almost a year of constant operational flying and fighting. He claimed at least 3 more victories in August 1915, either in the Scout or flying an F.E.2.[citation needed]

Hawker was posted back to England in late 1915, with some 7 victory claims (inc.1 captured, 3 destroyed, 1 'out of control' and 1 'forced to land') making him the first British flying ace, and a figure of considerable fame within the ranks of the RFC.

It has since been argued that shooting down three aircraft in one mission was a feat repeated several times by later pilots, and whether Hawker deserved his Victoria Cross has been questioned. However, in the context of the air war of mid-1915 it was unusual to shoot down even one aircraft, and the VC was awarded on the basis that all the enemy planes were armed with machine guns. More significantly, by the summer of 1915, the German Feldflieger Abteilung two-seater observation units of the future Luftstreitkräfte, had by this time, received examples of the Fokker Eindecker monoplane, with one Eindecker going to each unit, with a fixed, forward-firing machine gun fitted with a "synchronization gear" that prevented the bullets from striking the propeller. The first claim using this arrangement, though unconfirmed by the German Army, was by Leutnant Kurt Wintgens on 1 July 1915, some 225 miles (362 km) over Lunéville distant from where Hawker had his three-victory success nearly a month later. Therefore, the German pilots like Wintgens and Leutnant Otto Parschau, another pioneering Eindecker pilot, could employ the simple combat tactic of aiming the whole aircraft, and presenting a small target to the enemy while approaching from any angle, preferably from a blind spot where the enemy observer could not return fire.

Hawker flew before Britain had any workable synchroniser gear, so his Bristol Scout had its machine gun mounted on the left side of the cockpit, firing forwards and sideways at a 45 degree angle to avoid the propeller. The only direction from which he could attack an enemy was from its right rear quarter – precisely in a direction from which it was easy for the observer to fire at him. Thus, in each of the three attacks, Hawker was directly exposed to the fire of an enemy machine gun. 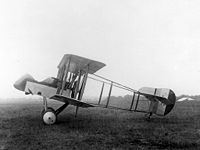 Promoted to major early in 1916. Hawker was placed in command of the RFC's first (single seater) fighter squadron, Number 24 based at Hounslow Heath Aerodrome and flying the Airco DH.2 pusher. After two fatalities in recent flying accidents, the new fighter, which featured a forward-mounted Lewis machine gun, soon earned a reputation for spinning; its rear mounted rotary engine and sensitive controls made it very responsive. Hawker countered this worry by taking a DH.2 up over the squadron base and, in front of the squadron pilots, put the aircraft through a series of spins, each time recovering safely. After landing, he carefully described to all pilots the correct procedures to recover from a spin. Once the pilots became used to the DH.2's characteristics, confidence in the aircraft rose quickly, as they came to appreciate its manoeuvrability.[8][9]

He then led the squadron back to Bertangles, north of the Somme in February 1916, where the squadron quickly helped counter the Fokker Eindecker monoplanes of the Imperial German Army's Fliegertruppe which were dominant over the Western Front in the run up to the Somme offensive in July 1916.[citation needed] Hawker's aggressive personal philosophy of "Attack Everything", was the entire text of his tactical order of 30 June 1916.[10] Spurred by his aggressiveness, 24 Squadron claimed some 70 victories by November at the cost of 12 of its own planes and 21 pilots killed, wounded or missing. Around this time, Hawker developed a ring gunsight and created a clamp and spring-clip device to hold the Lewis in place on the D.H.2. He also designed sheepskin boots that reached to the upper thigh, known as "fug-boots," which became standard issue to combat the risk of frostbite at high altitude.[citation needed]

By mid 1916, RFC policy was to ban squadron commanders from operational flying, Hawker included. However, he continued to make frequent offensive patrols and reconnaissance flights, particularly over the Somme battlefields.

As the year wore on, the Germans introduced far more potent fighters to the front, starting with the Luftstreitkräfte's first biplane fighter, the Halberstadt D.II, and shortly thereafter the even more advanced Albatros D.I, rapidly making the DH.2 obsolete. 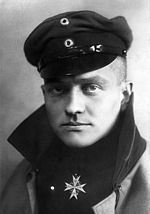 On 23 November 1916, while flying an Airco DH.2 (Serial No. 5964), Hawker left Bertangles Aerodrome at 1300 hours as part of 'A' Flight, led by Capt J. O. Andrews and including Lt (later AVM) R.H.M.S Saundby. Andrews led the flight in an attack on two German aircraft over Achiet. Spotting a larger flight of German aircraft above, Andrews was about to break off the attack, but spotted Hawker diving to attack. Andrews and Saundby followed him to back him up in his fight; Andrews drove off one of the Germans attacking Hawker, then took bullets in his engine and glided out of the fight under Saundby's covering fire. Losing contact with the other DH-2's, Hawker began a lengthy dogfight with an Albatros D.II flown by Leutnant Manfred von Richthofen of Jasta 2. The Albatros was faster than the DH2, more powerful and with a pair of lMG 08 machine guns, more heavily armed. Richthofen fired 900 rounds during the running battle. Running low on fuel, Hawker eventually broke away from the combat and attempted to return to Allied lines. The Red Baron's guns jammed 50 yards from the lines, but a bullet from his last burst struck Hawker in the back of his head, killing him instantly. His plane spun from 1,000 ft (300 m) and crashed 200 metres (220 yards) east of Luisenhof Farm, just south of Bapaume on the Flers Road, becoming the German ace's 11th victim. German Grenadiers reported burying Hawker 250 yards (230 metres) east of Luisenhof Farm along the roadside.[11] Richthofen claimed Hawker's Lewis gun from the wreck as a trophy and hung it above the door of his quarters. Major Lanoe George Hawker is listed on the Arras Flying Services Memorial for airmen lost with no known grave.[12]

Hawker's original VC was lost when the Hawker family belongings were left behind after the fall of France in 1940. On their return after the Second World War, they found that their possessions, including the VC, had been stolen. A replacement was issued to Hawker's brother on 3 February 1960, and is now held by the Royal Air Force Museum, Hendon.[13] Hawker was a first cousin of Arthur Bagot, a naval officer in the First World War and Albert Medal recipient.[14]

A window (designed by Francis Skeat) commemorating Hawker was installed in St. Nicholas church, Longparish in 1967.[15] The design features St. Michael above an airfield with two pilots in the foreground.[16] There is a copy of the window at the Museum of Army Flying at Middle Wallop.[17]