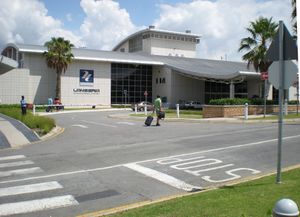 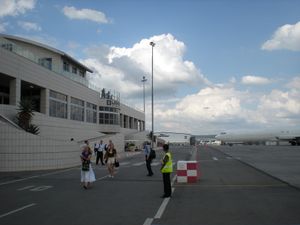 Lanseria International Airport (IATA: HLA, ICAO: FALA) is a privately owned international airport that is situated north of Randburg and Sandton to the north west of Johannesburg, South Africa. The airport can handle aircraft up to the size of the Boeing 757-300.

Lanseria Airport started out as a grass strip airfield in 1972, the brainchild of two Pretoria pilots – Fanie Haacke and Abe Sher. The land was originally bought by Krugersdorp and Roodepoort Municipality together with the Transvaal Peri-Urban Board and contracted to Lanseria Management Company on a 99-year lease since 1972.

The airport was officially opened by the Minister of Transport at the time, Hannes Rall, on 16 August 1974. Soon after its opening, Lanseria Airport hosted the Air Africa '75 (in 1975).

When Nelson Mandela was released from prison in 1990 he was flown to Johannesburg landing at Lanseria Airport.

On 15 November 2012 the airport was sold to a consortium consisting of Harith, an infrastructure development fund management company; the women's empowerment company Nozala; and the Government Employee Pension Fund, through the Public Investment Corporation.[1]

National Airways has its head office building on the airport property.[6]

Various maintenance and avionics companies are situated on the airport including Interjet Maintenance, ExecuJet, Lanseria Jet centre and NAC (being the largest) with various other smaller outfits. The maintenance facilities at Lanseria International Airport provide small to midsize aircraft maintenance mainly focused on corporate aircraft and small regional airliners, up to a Bombardier CRJ700 or similar.