Latvian Air Force (Latvian: Latvijas Gaisa spēki) is the aviation branch of the National Armed Forces.[1] The first Air Force (AF) units were established 1992. It has no air combat capability, thus the defense of Latvian air space is maintained by NATO, with rotating detachments of four aircraft to Lithuania at four-monthly intervals (see Baltic Air Policing).

The Latvian Air Force was first founded during the Latvian War of Independence. On 7 June 1919 an Air Group was formed, commanded by Lt. Alfrēds Valleika. The first aircraft were former Bolshevik Nieuport 24bis and Sopwith 1½ Strutter, both seized from German forces. They first flew on 5 August 1919, and accomplished the first bombing mission on 26 August 1919.[2] From September the air force had three aircraft, and took part in fighting against the Germans and White Russians. Another 7-8 aircraft were seized and repaired after defeating of Russo-German forces, and 7 Sopwith Camels and 3 Sopwith 1½ Strutters were received from the British in December 1919.[2] The Latvian air force flew 69 missions during the war of independence.[2] In the years to follow many more aircraft were added to the inventory and the Air Group was eventually renamed the Aviation Regiment in 1926. An interesting feat of the Latvian naval aviation was a 6000-km trip to England and back, by three Fairey Seal floatplanes, in 1936.[3]

In 1939, the Aviation Regiment consisted of three fighter squadrons, armed with 24 Gloster Gladiator and 6 Bristol Bulldog (a fourth squadron was in organization), three reconnaissance squadrons, armed with up to 12 Letov Š-16LS, 2 Hawker Hind and 10 Stampe SV.5, and a naval reconnaissance squadron with 4 Fairey Seal and two other planes.[2] The Soviet occupation in 1940 ended the activities of the Air Force. At that time there were almost 130 aircraft.[citation needed]

The post-Soviet Latvian Air Force was formed on the 24th of February 1992 at Spilve Airport. In August 1994 the airforce moved to an ex-soviet Lielvārde Air Base. In the beginning of the new century two new and more heavy Mi-8MTV Hip helicopters were bought. Both helicopters are fitted with search and rescue equipment, but are also used for transportation of troops, evacuation and support of the Special Forces. In 2004 the Ministry of Defense bought two more Mi-8MTV's at the Russian Ulan Ude helicopter (rework) factory. These two might replace the first two, because of the limited flying time left on the first two examples. One Mi-8MTV is normally at SAR stand-by in Riga, which is closer to the sea than Lielvārde.

In 2004, the Air Force has commenced the modernization of the surface air defense capabilities by signing a contract regarding procurement of RBS-70 missiles.

It is planned to accommodate all the Air Force units at the Lielvārde military base in the near future. AF Air Operations Center was opened in 2009. Renovation of the air base is planned to be finished by 2014.

The Air Force carries out Latvian airspace surveillance, control and defense, provides air defense support to the Land Forces units and participates in search and rescue operations over the Baltic Sea, the Gulf of Riga and dry land. They also transport NAF soldiers and cargo, provide transport for the State President, as well as other high-level Latvian and foreign officials during their visits to Latvia and abroad. AF aircraft also assist other NAF units, the Interior Ministry and the Crisis Medicine Centre. The Air Force carries out the national airspace surveillance by military radars included in its armament.

One of the key priorities for the development of the AF is their integration into the NATO Air Defense System. The modernization of air defense equipment and the training of personnel is carried out with this purpose in mind. Enhancing the Air Space Surveillance System, developing a search and rescue helicopter subdivision and personnel training are also included on this list of priorities.

Development of the Lielvārde military base will ensure centralization of Air Force units and establishment of an efficient command and control system, which will result in a reduction of the maintenance costs of the Air Force units. .

The main mission of Air Force is to: 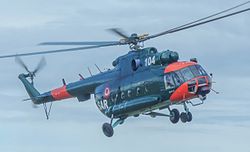 Previous aircraft operated by the Latvian Air Force were the PZL-104 Wilga, An-2, LET-410, and the Mil Mi-2 helicopter.
All have either been placed in storage, or are unserviceable.[5]