From Infogalactic: the planetary knowledge core
Jump to: navigation, search
This article is about the structure from which rockets are launched. For other uses, see Launchpad (disambiguation). 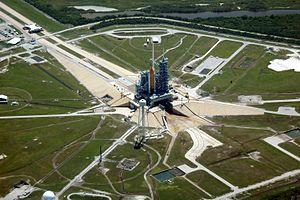 A launch pad is an above-ground platform from which a rocket-powered missile or space vehicle is vertically launched. A spaceport (or launch complex) is a facility which includes, and provides required support for, one or more launch pads. A launch pad generally contains a fixed or mobile service structure, which provides one or more access platforms to inspect and maintain the vehicle, and an umbilical structure which provides the vehicle with propellants, cryogenic fluids, electrical power, communications, and telemetry prior to launch. The service structure also provides access to the crew cabin for vehicles carrying humans. The pad may contain a flame deflection structure to prevent the intense heat of the rocket exhaust from damaging the vehicle or pad structures, and a sound suppression system spraying large quantities of water may be employed. The pad may also be protected by lightning arrestors.

A launch pad is distinct from a missile launch facility (or missile silo), which also launches a missile vertically but is located underground in order to help harden it against enemy attack, or conceal it from surveillance.

Cryogenic propellants (liquid oxygen oxidizer, and liquid hydrogen fuel) need to be continuously topped off (i.e., boil-off replaced) during the launch sequence (countdown), as the vehicle awaits liftoff. This becomes particularly important as complex sequences may be interrupted by planned or unplanned holds to fix problems.

Most rockets need stable support for a few seconds after ignition while the engines build up to stable, full thrust. Therefore the vehicle is commonly held on the pad by hold-down arms or explosive bolts, which are triggered when the vehicle is stable and ready to fly, at which point all umbilical connections with the pad are released.

Transport of rockets to the pad

There are several different types of launch site, determined by the means by which the space vehicle gets to the pad.