Laurel is a city in Yellowstone County, Montana, United States. It is the third largest community in the Billings Metropolitan Statistical Area, and is located in the Yellowstone Valley, as an east-west terminal division point of the Burlington-Northern Railroad. The population was 6,781 at the 2010 census.[4]

Both Interstate 90 and a number of local railroads run through Laurel. It is most known for its industry and agriculture, but also has a historic shopping district.

Before Laurel became a city or a community, people passed through the site during the gold rush period, when gold was discovered at the Clarks Fork headwaters. They came by team and wagon, and by small steamer vessels up the Yellowstone River. The government was in the process of planning a railroad to the west coast, and had surveying crews out to map the country on the most direct route. Many of the prospectors that went west in search of gold, felt that gold might be found in other parts of the state, so some returned to the Yellowstone Valley, and others came from the East to settle here. However, this did not take place until after the Custer Massacre in 1876. It was not until 1877 that the white man felt safe in the Yellowstone Valley, after the power of the Sioux was broken. So it was that while the memory of the Massacre of General Custer and his Command on the Little Big Horn River was still fresh in the minds of settlers of Montana, that a little community was established in the Yellowstone Valley.[5]

The history of Laurel began when settlers began making their homes in the vicinity in 1879. There was a section house built that served as a depot and post office, situated about where Hobo Hill is, or near the center of the present railroad yards east of Laurel. The railroad pushed closer to Laurel from the east, up the Yellowstone Valley during the summer of 1882. Up to this time, there were about 200 people in the community. With the advent of the railroad, many people came to work, with the population growing to 368 in 1900, 806 in 1910, and 2,338 in 1920.

Laurel was originally known as the station of Carlton, however by 1883, its name was changed to Laurel, after a local shrub. Laurel was considered a town in 1906, but it was not until August 1908 that it became incorporated, and two months later, on October 10, 1908, city government was established with the election of a city council and mayor.

Some of Laurel's residents commute the 15 miles (24 km) to Billings, Montana's largest city. Laurel is also significant as it lies on one of two main roads to Red Lodge, 45 miles (72 km) southwest on US 212; it is a popular mountain town and an end of the Beartooth Highway.

Laurel is also served by the Laurel Municipal Airport, a publicly owned public-use airport, which is located 2.4 miles (3.9 km) north of the central business district.

The City of Laurel operates under a Mayor - Alderman form of government.[7] Full executive authority is vested in the Mayor, who is elected at-large for a four-year term. The Mayor presides over the meetings of the City Council and appoints and charges regular and special committees of the City Council. The Mayor is eligible to vote only in cases of a tie, but he may be heard at all times. He may veto all City Council actions, including line items within a budget resolution, and his veto may be overridden by two-thirds of the whole membership of the City Council.

In November 2007, the citizens of Laurel approved a city charter with self-governing powers. This allows for the position of Chief Administrative Officer to supervise the city's operations.

Legislative authority is vested in the City Council, which is composed of eight aldermen or women who are elected to four-year terms by the residents of the Ward within which the respective alderman/woman resides. The City Council has management and control of the finances and property of the City. The City Council has the power to adopt ordinances and regulations consistent with state and federal law for the good government, preservation of good order, benefit of trade and commerce, protection of the quality of life within the city, and, as necessary, to carry out the purposes of the government of the City of Laurel.

The Laurel Police Department is a member of the Montana Law Enforcement Testing Consortium (MTLETC). Rick Musson was promoted to the position of Chief of Police in August 1998, a position which he continues to hold.

The Laurel Police Department occasionally accepts applications from individuals who would like to volunteer their time to serve and protect the community. As reserve officers, they are offered training, challenge, excitement, teamwork, and significant personal rewards. The LPD has had a reserve program for over 35 years.

The Laurel Volunteer Fire Department has the main purpose of providing firefighting and rescue emergency response for the community of Laurel, the 110 square miles (280 km2) surrounding Laurel and to all those who are traveling though and find themselves in need of assistance. In addition, the LVFD provides mutual aid to Billings, Park City, and CHS Industrial Fire Departments; and assistance as needed to several surrounding Fire Departments, including Lockwood, Red Lodge, Columbus, Molt and Joliet.

In addition to firefighting and rescue, the fire department is known for its world class 4 July fireworks, rated as one of the top 10 events in the Northwest, and it’s Christmas holiday celebration.

The Fire Department is also known for award winning Fire Prevention program. With the motto “Prevention through Education”, the LVFD visits the children of Laurel several times a year, educating them on preventing fires and fire safety. The first week of October is named “Fire Prevention Week”. The week is filled with visits to the schools by the Firefighters, an open house where the Department’s doors are opened to the public and an hour-long program for the children of the community.

The Billings Canal, used for irrigation, starts in Laurel.

The City of Laurel now has two types of public transit available to City residents: a Demand-Response Service and a Van Pool to Billings.

Demand-Response Service is available Monday-Friday 10:00 am to 2:00 pm. This is a door-to-door service that requires an advance notice. Reservations must be made the day prior to need by 4:00 pm. You may make your reservation by calling the City of Laurel Public Works Department at 628-4796. On the 1st, 3rd, & 5th Wednesday of each month the Demand-Response Service will make trips to Billings. On these days the door-to-door service will be unavailable within the City of Laurel.

The City of Laurel Van Pool Service will be available to the Billings Downtown Area from Laurel for those that would like to consider carpooling to work during the week. The Van Pool bus will leave at approximately 7:30 a.m. and return at approximately 5:30 p.m. Cost to ride the Van Pool is $10 per week. There is room for 15 passengers in the Van Pool. 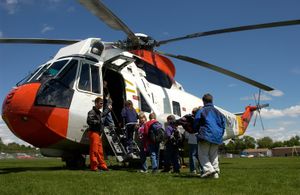 Laurel is home to one of the largest 4 July parade and fireworks.

Laurel Aviation and Technology Week began in 1991. Students at every grade level are treated to hands on demonstrations and learn about careers. It has been held every three years except for the millennium year. In 2013 the event was cancelled due to federal budget restraints.[9]

The Laurel Outlook is Laurel's newspaper, serving the Laurel and the surrounding areas, with a weekly publication.

There were 2,790 households of which 32.4% had children under the age of 18 living with them, 47.1% were married couples living together, 10.9% had a female householder with no husband present, 5.3% had a male householder with no wife present, and 36.7% were non-families. 31.5% of all households were made up of individuals and 14.9% had someone living alone who was 65 years of age or older. The average household size was 2.38 and the average family size was 2.99.

There were 2,529 households out of which 32.6% had children under the age of 18 living with them, 54.6% were married couples living together, 10.1% had a female householder with no husband present, and 31.2% were non-families. 27.7% of all households were made up of individuals and 14.6% had someone living alone who was 65 years of age or older. The average household size was 2.44 and the average family size was 2.96.