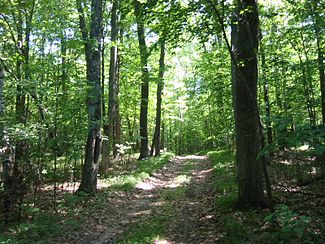 A dirt road in the North Woods forest.

Laurentian Mixed Forest in the U.S. 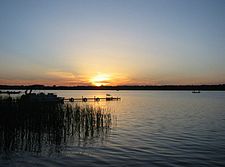 Sunset on a northern Minnesota lake.

The Laurentian Mixed Forest Province, also known as the North Woods, is a forested ecoregion in the United States and Canada. Among others, this terminology has been adopted by the Minnesota Department of Natural Resources. Similar, though not necessarily entirely identical regions, are identified by the United States Environmental Protection Agency as Northern Lakes and Forests, and by the World Wildlife Fund by regions such as the Western Great Lakes forests and Eastern forest-boreal transition.

In the United States, it consists of a broad region of northern Minnesota, Wisconsin and Michigan (Northern Michigan and the Upper Peninsula) and the forested areas of New England. In Canada, it is found in Ontario around the Great Lakes and the Saint Lawrence River through Quebec to Quebec City.

The area is a Temperate broadleaf and mixed forests biome transition zone between the true boreal forest to the north and Big Woods to the south, with characteristics of each. It has areas of both broadleaf and conifer forest cover, and bodies of water ranging from lakes to conifer bogs and swamps.[1] Conifers include pines, spruces, firs, and junipers; deciduous types include aspens, oaks, paper birches, mountain ash and maples.[2][3]

After loggers left in late 19th century, lodges were built as fishing camps and affluent sportsmen arrived by rail. In the 1920s, roads were built and automobiles became more affordable. The next four decades were the golden age of lake resorts of the North Woods. The influx of families continued towards the north, and the now familiar log-cabin look with massive beams, fieldstone fireplace, and boulder foundations became synonymous with the North Woods. In the late 1940s and 1950s, the expansion continued. However, today, only a few classic-styled lodges survive to give a feel of the golden era.