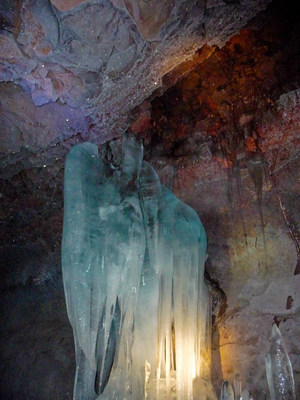 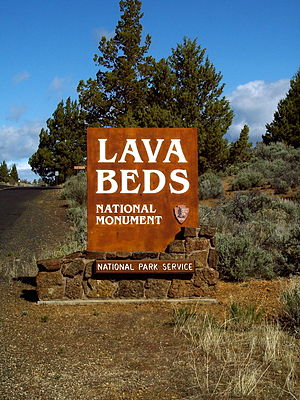 Lava Beds National Monument is located in northeastern California, in Siskiyou and Modoc counties. The Monument lies on the northeastern flank of the Medicine Lake Volcano, and has the largest total area covered by a volcano in the Cascade Range.

The region in and around Lava Beds Monument lies at the junction of the Sierra-Klamath, Cascade, and the Great Basin physiographic provinces. The Monument was established as a United States National Monument on November 21, 1925, and includes more than 46,000 acres (190 km2).

Lava Beds National Monument has numerous lava tube caves, with twenty-five having marked entrances and developed trails for public access and exploration. The monument also offers trails through the high Great Basin xeric shrubland desert landscape and the volcanic field. 1872-1873, this area was the site of the Modoc War, with a band led by Kintpuash (also known as Captain Jack). The area of Captain Jack's Stronghold was named in his honor.

Volcanic eruptions on the Medicine Lake shield volcano have created an incredibly rugged landscape punctuated by these many landforms of volcanism.

Cinder cones are formed when magma is under great pressure. It is released in a fountain of lava, blown into the air from a central vent. The lava cools as it falls, forming cinders that pile up around the vent. When the pressure has been relieved, the rest of the lava flows from the base of the cone. Cinder cones typically only erupt once.

The cinder cones of Hippo Butte, Three Sisters, Juniper Butte, and Crescent Butte are all older than the Mammoth and Modoc Crater flows, more than 30,000-40,000 years old. Eagle Nest Butte and Bearpaw Butte are 114,000 years old. Schonchin Butte cinder cone and the andesitic flow from its base were formed around 62,000 years ago. The flow that formed Valentine Cave erupted 10,850 years ago. An eruption that formed The Castles is younger than the Mammoth Crater flows. Even younger were eruptions from Fleener Chimneys, such as the Devils Homestead flow, 10,500 years ago, and Black Crater 3,025 years ago. About 1,110 years ago, plus or minus 60 years, the Callahan flow was produced by an eruption from Cinder Butte. Though Cinder Butte is just outside the boundary of the monument, the Callahan flow is in Lava Beds and is the youngest flow in the monument.

Spatter cones are built out of thicker lava. The lava is thrown out of the vent and builds, layer by layer, a chimney surrounding the vent. Fleener Chimneys and Black Crater are examples of spatter cones.

Roughly ninety percent of the lava in the Lava Beds Monument is basaltic. There are primarily two kinds of basaltic lava flows: pahoehoe and 'a'a. Pahoehoe is smooth, often ropy and is the most common type of lava in Lava Beds. Aa is formed when pahoehoe cools and loses some of its gases. Aa is rough, sharp, and jagged; an excellent example is the Devils Homestead lava flow, which originated at Fleener Chimneys. Most of the rest of the lava in the monument is andesitic. Pumice, a type of rhyolitic lava, also is found covering the monument; this rained down around 900 years ago during the eruption of Glass Mountain.

The flows from Mammoth and Modoc Craters comprise about two-thirds of the lava in the monument. Over 30 separate lava flows located in the park range in age from 2,000,000 years BP to 1,110 years BP. Some of the major Lava Flows within Lava Beds National Monument include the: Callahan Flow; Schonchin Flow; Mammoth Crater Flow; Modoc Crater Flow; and Devils Homestead Flow.

Gillem Bluff, a fault scarp, was created as the region stretched and a block of earth dropped down along this fault (see Basin and Range Province). The tuff layer on top of Gillem Bluff is 2,000,000 years old, inferring the rock layers beneath are even older. The oldest lava flow from the Medicine Lake Volcano within the monument is the Basalt of Hovey Point, near Captain Jack's Stronghold, which is 450,000 years old. Petroglyph Point was created about 275,000 years ago when cinders erupted through the shallow water of Tule Lake; violent explosions of ash and steam formed layers upon layers of tuff.

The caldera is thought to have formed by subsidence, during which basalt and andesite were erupted up on the slopes.[4] 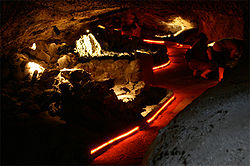 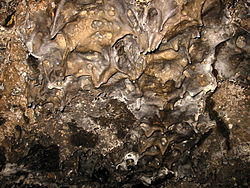 Lava flows dated to about 30,000-40,000 years ago formed most of the lava tube caves in the monument. As the hot basaltic lava flowed downhill, the top cooled and crusted over, insulating the rest of the lava and forming lava tubes. Lavacicles on the ceiling of a lava tube were produced as the level of lava in the tube retreated and the viscous lava on the ceiling dripped as it cooled.

Dripstone was created when lava splashed on the inside walls of the tubes. The leaching of minerals from pumice gravel, soils, and overlying rock provides for deposition of secondary speleothems in lava tubes.

Lava Beds National Monument has the largest concentration of lava tube caves in North America. One has electrical lighting, the others are illuminated by ceiling collapse portals or require flashlights, available on loan.

A series of small earthquakes in late 1988 has been attributed to subsidence in the caldera. N-NE trending ground cracks, as well as N-NE trending vent series show relationships between tectonism and volcanism. One very prevalent ground crack exists along the northeastern boundary of the monument- "The Big Crack."

The high elevation, semi-arid desert environment of Lava Beds Monument receives an average of 14.8 inches (376 mm) of annual precipitation, including 44 inches (110 cm) of snowfall. The climate is characterized by warm, dry summers and cold, moderately snowy winters. The monthly daily average temperature ranges from 31.5 °F (−0.3 °C) in December to 68.0 °F (20.0 °C); there are 21 days with 90 °F (32 °C)+ highs annually, and 10 days where the high does not rise above freezing. The average window for freezing temperatures is September 23 thru June 7.

The lava tube collapse systems and lava outcrops support a great diversity of plant life, from an impressive variety of lichens and mosses to plants such as desert sweet (Chamaebatiaria millefolium), the aromatic purple desert sage (Salvia dorrii carnosa) and yellow blazing star (Mentzelia laevicaulis). An impressive variety of fern species are present in cave entrances including the spreading wood fern (Dryopteris expansa) and the western swordfern (Polystichum munitum). These species are well outside of their normal range which is 90–125 miles (145–201 km) west on the northern California coastline. 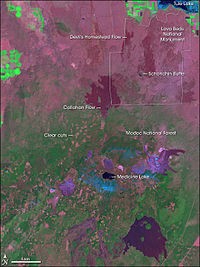 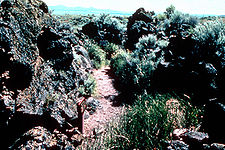 During the Modoc War of 1872-1873, warriors of a band led by Kintpuash (Captain Jack) used these lava beds as a defensive stronghold to resist being captured and returned to the Klamath Reservation in Oregon, to which they had been removed, as European Americans wanted their lands. The Modoc took refuge in what was later named as "Captain Jack's Stronghold", a natural lava fortress. From this defensive base a group of 53 fighting men and their families held off US Army forces, that numbered up to ten times the Modocs' population, for five months.

In April 1873 at a peace commission meeting, Captain Jack killed Gen E. R. S. Canby; associates killed Reverend Eleazer Smith, and wounded two other commissioners. Canby was the only general to be killed in the Indian Wars. The Modoc mistakenly thought the Americans would leave if their leaders were killed. Instead Army reinforcements were brought in and the Modoc were eventually forced to surrender. Kintpuash and his associates were convicted of war crimes for the murders, and executed by hanging at Fort Klamath.

The Lava Beds National Wilderness is a 28,460-acre (11,520 ha) wilderness area within the Lava Beds National Monument. It was designated by the US Congress on October 13, 1972 with passage of Public Law 92-493.[6] The wilderness protects more than half of the national monument in two separate eastern and western units. The larger eastern unit contains the extensive Schonchin lava flow on the east side of the monument. The western unit covers the monument's area within the transition zone of the Cascade Range's montaine southern end and the arid Modoc Plateau ecosystems.

The different soil types creates plant community diversity in the Wilderness Area, providing various habitats for a wide range of wildlife. The numerous coyotes and foxes, as well as raptors, feed on rodents such as the jackrabbit and kangaroo rat. The kangaroo rat is especially adapted to dry, waterless environments because it can go 'a lifetime' without water.[7] A metabolic process occurs whereby it synthesizes water from chemical components in the dry seeds it eats.[7]

The National Park Service manages the Lava Beds Wilderness Area and has several restrictions in place. Camping is prohibited near cave entrances or trails. Open campfires may be prohibited during very hot and dry weather.

The Lava Beds National Monument has 13 hiking trails, all of which cross or enter the backcountry.[9] The most popular trails are short, but lead to a number of historic sites as to several geological areas within the Lava Beds Wilderness. The long trails are mostly in designated wilderness areas.

These trails are primarily associated with park attractions, especially the Lava Beds geological wilderness, and are sometimes out and back day hikes, and in many cases are improved boardwalks and supported with interpretive signs and exhibits.

The only expansion in the modern era occurred in 2011 when the monument expanded by roughly 132 acres. An administrative transfer brought two parcels of land which were previously managed by the Bureau of Reclamation and the Bureau of Land Management into National Park Service management. These two parcels adjoin the Petroglyph Point Unit of the monument.