The Lavochkin La-5 (Лавочкин Ла-5) was a Soviet fighter aircraft of World War II. It was a development and refinement of the LaGG-3 and was one of the Soviet Air Force's most capable types of warplane.

Lavochkin La-5 replica of Capt Georgii Dmitrievich Kostylev's La 5 of the 4th GIAP, White 15 that served in Leningrad 1943, at the Museum of the Great Patriotic War in Moscow, 2005.

The La-5's heritage began even before the outbreak of war, with the LaGG-1, a promising yet underpowered aircraft. The LaGG-3 was a modification of that design that attempted to correct this by both lightening the airframe and fitting a more powerful engine. Nevertheless, this was not enough, and the lack of power remained a significant problem.

In early 1942, two of the LaGG-1 and -3's designers, Semyon Lavochkin and Vladimir Gorbunov, attempted to correct this deficiency by experimentally fitting a LaGG-3 with the more powerful Shvetsov ASh-82 radial engine. Since the LaGG-3 was powered by an inline engine, they accomplished this by grafting on the nose section of a Sukhoi Su-2 (which used this engine). By now, the shortcomings of the LaGG-3 had caused Lavochkin to fall out of Joseph Stalin's favour, and factories previously assigned to LaGG-3 construction had been turned over to building the rival Yakovlev Yak-1 and Yak-7. The design work required to adapt the LaGG-3 to the new engine and still maintain the aircraft's balance was undertaken by Lavochkin in a small hut beside an airfield over the winter of 1941-1942, all completely unofficially.

When the prototype took flight in March, the result was surprisingly pleasing - the fighter finally had a powerplant that allowed it to perform as well in the air as it had been supposed to on paper. After flying, the LaG-5 (the change in name reflecting that one of the original LaGG designers was no longer with the programme), Air Force test pilots declared it superior to the Yak-7, and intensive flight tests began in April.

By July, Stalin ordered maximum-rate production of the aircraft and the conversion of any incomplete LaGG-3 airframes to the new configuration, now simply known as the La-5. The prototype was put in mass production almost immediately in factories located in Moscow and in the Yaroslav region. Design changes for main production La-5 models included fixed slats to improve all-round performance. While still inferior to the best German fighters, the La-5 proved to be every bit their match closer to the ground. With most of the air combat over the Eastern Front taking place at altitudes of under 5,000 m (16,404 ft), the La-5 was very much in its element.

Further refinement of the aircraft involved cutting down the rear fuselage to give the pilot better visibility, making this version the La-5F. Later, a fuel-injected engine, a different engine air intake and further lightening of the aircraft led to the designation La-5FN that would become the definitive version of the aircraft. A full circle turn took 18–19 seconds. Altogether, 9,920 La-5s of all variants were built, including a number of dedicated trainer versions, designated La-5UTI. Very late La-5FN production models had two 20mm Berezin B-20 cannon installed in the cowling in place of the heavier two 20mm ShVAK (both were capable of a salvo weight of 3.4 kg/s). Further improvements of the aircraft would lead to the Lavochkin La-7.

A number of La-5s continued in the service of Eastern Bloc nations after the end of the war, including Czechoslovakia.

In the summer of 1943, a brand-new La-5 made a forced landing on a German airfield providing the Luftwaffe with an opportunity to test-fly the newest Soviet fighter. Test pilot Hans-Werner Lerche wrote a detailed report of his experience.[1] He particularly noted that the La-5FN excelled at altitudes below 3,000 m (9,843 ft) but suffered from short range and flight time of only 40 minutes at cruise engine power. All of the engine controls (throttle, mixture, propeller pitch, radiator and cowl flaps, and supercharger gearbox) had separate levers which served to distract the pilot during combat to make constant adjustments or risk suboptimal performance. For example, rapid acceleration required moving no less than six levers. In contrast, contemporary German aircraft, especially the BMW 801 radial-engined variants of the Focke-Wulf Fw 190 front line fighter, had largely automatic engine controls with the pilot operating a single lever and electromechanical devices, like the Kommandogerät pioneering engine computer on the radial-engined Fw 190s, making the appropriate adjustments. Due to airflow limitations, the engine boost system (Forsazh) could not be used above 2,000 m (6,562 ft). Stability in all axes was generally good. The authority of the ailerons was deemed exceptional but the rudder was insufficiently powerful at lower speeds. At speeds in excess of 600 km/h (370 mph), the forces on control surfaces became excessive. Horizontal turn time at 1,000 m (3,281 ft) and maximum engine power was 25 seconds.

In comparison with Luftwaffe fighters, the La-5 was found to have a comparable top speed and acceleration at low altitude. In comparison with the Bf 109 the La-5FN possessed a slightly higher roll rate. However, the Bf-109 was slightly faster and had the advantages of higher rate of climb.[2] In comparison with the Fw 190A-8 the La-5FN had a slightly better climb rate and smaller turn radius. However, the Fw-190A-8 was faster at all altitudes and had significantly better dive performance and excelled roll-rate. As a result, Lerche's recommendations for Fw190 pilots were to attempt to draw the La-5FN to higher altitudes, to escape attacks in a dive followed by a high-speed shallow climb, and to avoid prolonged turning engagements. Utilizing MW 50 both German fighters had superior performance at all altitudes.

The La-5 had its defects. Perhaps the most serious being the thermal isolation of the engine, lack of ventilation in the cockpit, and a canopy that was impossible to open at speeds over 350 km/h. To make things worse, exhaust gas often entered in the cockpit due to poor insulation of the engine compartment. Consequently, pilots ignored orders and frequently flew with their canopies open.[3]

In general, Soviet pilots appreciated the La-5 as an effective fighter. "That was an excellent fighter with two cannons and a powerful air-cooled engine", recalled pilot Viktor M. Sinaisky. "The first La-5s from the Tbilisi factory were slightly inferior, while the last ones from the Gorki plant, which came to us from Ivanovo, were perfect. At first we received regular La-5s, but then we got new ones containing the ASh-82FN engine with direct injection of fuel into the cylinders. It was perfected and had better maneuverability, acceleration, speed and climb rate compare to the early variants. Everyone was in love with the La-5. it was easy to maintain too."[4] Nevertheless, La-5 losses were high, the highest of all fighters in service in USSR, not considering those of the Yak-1. In 1941-45, VVS KA lost 2,591 La-5s, 730 in 1942, 1,460 in 1943, 825 the following year and 233 in 1945.[5]

Only known La-5 survivor in existence is a wreck in the hold of Military Aviation Museum, awaiting restoration in The Fighter Factory. A series of images documenting the status were published on Aircraft Resource Center website in 2003.[6] As of this date, no new status of the restoration or aircraft's current ownership is known. 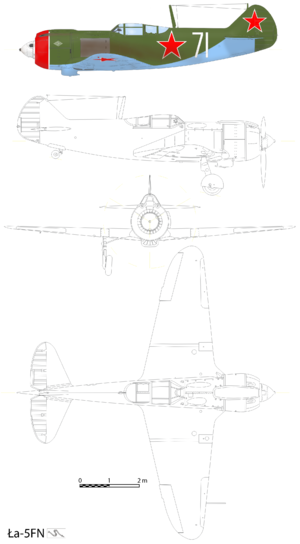