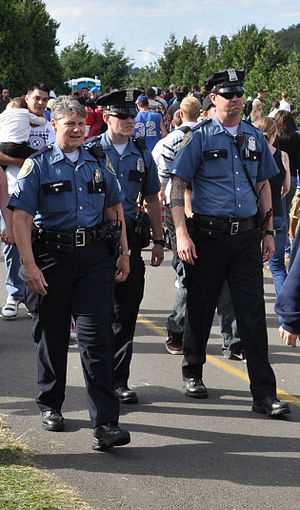 Law enforcement is any system by which some members of society act in an organized manner to enforce the law by discovering, deterring, rehabilitating, or punishing people who violate the rules and norms governing that society.[1] Although the term may encompass entities such as courts and prisons, it is most frequently applied to those who directly engage in patrols or surveillance to dissuade and discover criminal activity, and those who investigate crimes and apprehend offenders,[2] a task typically carried out by the police or another law enforcement agency. Furthermore, although law enforcement may be most concerned with the prevention and punishment of crimes, organizations exist to discourage a wide variety of non-criminal violations of rules and norms, effected through the imposition of less severe consequences.

Most law enforcement is conducted by some type of law enforcement agency, with the most typical agency fulfilling this role being the police. Societal investment in enforcement through such organizations can be massive, both in terms of the resources invested in the activity, and in the number of people professionally engaged to perform those functions.[2]

Law enforcement agencies tend to be limited to operating within a specified jurisdiction. In some cases, jurisdiction may overlap between organizations; for example, in the United States, each state has its own statewide law enforcement arms, but the Federal Bureau of Investigation is able to act against certain types of crimes occurring in any state. Various specialized segments of society may have their own internal law enforcement arrangements. For example, military organizations may have military police.

Social control capabilities have increased significantly over the past several decades, particularly because of an increased utilization of technologically advanced surveillance methods. Following the September 11 attacks, the United States Congress and the George W. Bush administration enacted anti-terrorism measures, which granted law enforcement considerable powers in the enforcement and prevention of terrorism. Collectively labeled as the War on Terror, the scope of such laws, policies, and directives are challenged by civil rights organizations and numerous legislators for lack of definitional precision, arbitrary application of sanctions, and violation of privacy laws. One of federal law enforcement's surveillance tools is Project Carnivore, a U.S. Department of Justice Internet surveillance program that is administered by the Federal Bureau of Investigation to access information flowing to and from a central processing unit on a network connection. While, theoretically relying on Michel Foucault’s theory of discipline and governmentality, as well as related insights in the social control literature, this paper examines Project Carnivore relative to the larger context of state rationality and related privacy issues.[3]