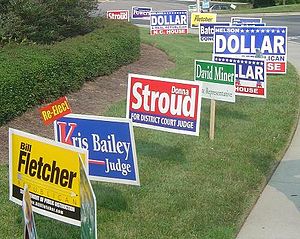 Lawn signs (also known as yard signs, bandit signs, placards, and road signs, among other names) are used for local advertising. They can be used by business such as real estate and are popular in election campaigns in some countries. They are small signs that can be placed on the property of a business or on the lawns of a candidate's supporters.

Lawn signs are typically used during elections in Canada and the United States, but not in United Kingdom politics, for example.

Lawn signs are often also placed near polling places on election day, although in most jurisdictions, there are legal restrictions on campaigning within a certain distance from a voting facility.[1] In most states, there are also restrictions on where these signs can be placed. There are some residential areas that have ordinances prohibiting any posting of yard signs.

The signs are typically placed close to the road for greater visibility.[2] In most highways a sign may not be erected so that the part of the sign face nearest a highway is within five feet of the highway's right of way line.

Signs come in various shapes and sizes, but are most often rectangular and between 12 and 40 inches on each side. They are usually produced in packages that include lawn sign wires since most of these lawn signs need to be placed on a grass[3] or dirt surface.

A common type of yard sign frame is the "H frame". The wire frames usually have at least two tines that can be inserted into the flutes of corrugated plastic signs. The tines on the other end of the frame can be inserted into the ground. A single or double crossbar between the two tines adds strength and makes the entire frame one single unit. It also prevents the sign face from sliding down the tines.

The I frame is essentially an H frame without a crossbar linking the two legs. Each leg may have an abutment that acts as a stop to prevent the sign from sliding down.

Political scientist Mel Kahn states that lawn signs help build name recognition for candidates. Supposedly, each sign represents 6-10 votes for the candidate.[4] However, veteran political organizers hate the task of handing out yard signs,[5] because they believe that time spent on procuring and distributing yard signs could be better used on other voter registration and get out the vote operations. One randomized field trial found yard signs simply reminding people to vote were able to significantly increase overall voter turnout.[6]

In addition, it gives the requester a placebo effect of doing something substantive, while not actually volunteering to help their candidate.[7] Critics charge that "lawn signs don't vote" and dismiss the importance of them.[8] Theft of lawn signs is treated like any other instance of petty theft, however, signs on the rights of way in many states are considered litter and can be picked up by anyone as a public service. This doesn't stop ill informed law enforcement officers from arresting law-abiding citizens on behalf of the politicians, though.[9][10]

The Wall Street Journal reported on a new type of yard sign designed for improved effectiveness by being cut into shapes or people to deliver a political message. The article suggests that such signs can expose 25,000 drivers per day to messages at a low cost.[11]