The Laz are ethnically a branch of the Georgian people, estimates of the total population of Laz people today ranges drastically, with numbers as low as 45,000 to as high as 1.6 million people, with the majority living in northeast Turkey. The Laz speak the Laz language, a member of the same Kartvelian language family as Georgian, Svan, and Mingrelian.[9][10] The Laz language is classified as endangered by UNESCO, with an estimated 130,000 to 150,000 speakers in 2001.[11]

In the 13th century BC, the Kingdom of Colchis was formed as a result of the increasing consolidation of the tribes inhabiting the region, which covered modern western Georgia and modern Turkish provinces of Trabzon and Rize. The advanced economy and favorable geographic and natural conditions of the area attracted the Milesian Greeks who colonized the Colchian westernmost coast establishing here their trading posts, one of them was Trapezus (Laz: ტამტრა/Tamtra), traditionally dated to 756 BC. Greeks noted that the hinterlands remained disunited, and they recorded the names of tribes: Moskhians,[12] Leucosyri,[13] Mares, Makrones, Mossynoikians, Tibareni,[14] Tzans[15] and Chaldians.[16] later region was Overrun by the Cimmerians and Scythians in the 730s-720s BC. By the 6th century BC, region had become officially a part of the Achaemenid Empire, The tribes living in the southern Colchis (Tibareni, Mossynoeci, Macrones, Moschi, and Marres) were incorporated into the 19th Satrapyof Persia. after the death of Alexander the Great, Mithridates, a Persian nobleman from Asia Minor, declared himself as King of Pontus, the kingdom grew in strength, from II-I century BC Pontus conquered surrounding lands. As a result of the brilliant Roman campaigns of generals Pompey and Lucullus, the Kingdom of Pontus was completely destroyed by the Romans and all its territory including Colchis, were incorporated into Roman Empire as her provinces. The former southern provinces of Colchis was re-organized by the Romans into the Roman province of Pontus Polemoniacus. Only during the reign of the Byzantine emperor Justinian I (r. 527–565) were the warlike tribes, the Sannoi or Tzannoi, subdued, Christianized, and brought under central rule.[17]

Beyond Rhizaeum there is a territory occupied by the Tzannoi, called Sannoi in early times; who live between the Byzantine and the Lazica. there is a certain settlements there named Athenae, Archabis and Apsarus. at the present time people who live there are neither subjects of the Romans nor of the king of the Lazica, except indeed that the bishops of the Lazica appoint their priests, seeing they are Christians.

In the 790s the reincorporation of Lazica with the Abkhazians ousted the Tzan-Laz from western Georgia; thereafter, the Laz lived under nominal Byzantine suzerainty in the Chaldia. with the collapse of direct Byzantine rule in eastern Anatolia after the Crusader Capture of Constantinople in 1204, the theme of Chaldia, was turned into Trebizond Empire. remaining part of the empire, mainly rural areas of this new empire appear to have been predominantly Laz in ethnic composition, the Laz monopolizing its coastal shipping and even transporting Trebizontine troops in their small craft. In the eastern part of empire, was created autonomous coastal theme of Greater Lazia,[18] theme contained lands between modern Pazar including Ardeşen and Arhavi-Hopa areas, the borders of this district remained basically identical over 300 years later. 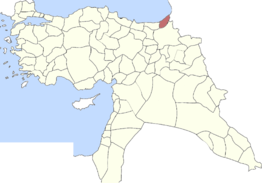 Laz family names, with Hellenized terminations, are noticeable in the records of the mediaeval empire of Trebizond, and it is perhaps not too venturesome to suggest that the antagonism (Trapezuntine Civil War), which existed in the politics of "the Empire," between the "town-party" and the "country-party" was in fact a national antagonism of Laz against Greek. Byzantine authors, such as Pachymeres, and to some extent Trapezundines such as Lazaropoulos and Bessarion, regarded the Trapezundian Empire as being no more than a Lazian border state.[19]

after 1297 Trebizond lost control over Lazia and it was remaining as part of Georgian duchies, until 1547, when it was finally conquered by Ottomans. under the Ottoman Empire, Lazia became the Lazistan Sanjak, which existed until the end of the empire in 1923. the designation of the term of Lazistan was officially banned in 1926, by Kemalists.[20] region was divided between Rize and Artvin provinces. In 1801, the Laz living in Georgia became members of the Russian Empire and eventually became Soviet citizens after World War I.

One of the chief tribes of ancient kingdom of Colchis, the Laz were converted to Christianity while living under the Byzantine Empire and the Kingdom of Georgia. In the relatively limited territory of Empire of Trebizond there was enough room for three dioceses: Trebizond, which was the only diocese established far in the past, Cerasous and Rizaion in Lazia, both formed as upgraded bishoprics. All three dioceses survived the Ottoman conquest (1461) and generally operated until the 17th century, when the dioceses of Cerasous and Rizaion were abolished. the diocese of Rizaion and the bishopric of Of were abolished at the time due to the Islamisation of the Lazs. most of them subsequently converted to Sunni Islam.[21][22]

There are also a few Christian Laz in the Adjaria region of Georgia who have converted to Christianity.[23]

250px
220px
Mosque and Orthodox church in Sarpi, border village on the coast of the Black Sea, on the border between Turkey and Georgia.

The total population of the Laz today is only estimated, with numbers ranging widely. The majority of Laz live in Turkey, where the national census does not record ethnic data on minor populations.[24]The majority of the Laz today live in an area they call Laziǩa, Lazistan or Lazona (ლაზონა) in Northeast Turkey, in a strip of land along the shore of the Black Sea, the designation of the term of Lazistan was officially banned in 1926 by Kemalists, the name was considered to be an 'unpatriotic' invention of ancien regime.[25] The ancient kingdom of Colchis, and its successor, Lazica, was located in the same region the Laz speakers are found in today, and its inhabitants probably spoke an ancestral version of the language. Colchis was the setting for the famous Greek legend of Jason and the Argonauts.

The Laz in Georgia are chiefly centered in the country's southwestern autonomous republic of Adjara. The largest Laz villages in Adjara are: Sarpi, Kvariati, Gonio and Makho. The Laz also live in Batumi, Kobuleti, Zugdidi and Tbilisi. Laz identity in Georgia has largely merged with a Georgian identity, and the meaning of "Laz" is seen as merely a regional category.[26]

The traditional Laz economy was based on agriculture—carried out with some difficulty in the steep mountain regions—and also on the breeding of sheep, goats, and cattle. Orchards were tended and bees were kept, and the food supply was augmented by hunting. The only industries were smelting, celebrated since ancient times, and the cutting of timber used for shipbuilding. 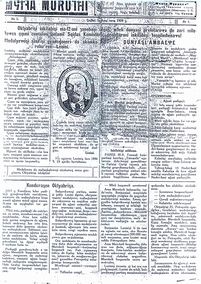 Cultural assimilation into the Turkish culture has been high, and Laz identity was oppressed during the days of Ottoman and Soviet Rule. One of the pivotal moments was in 1992, when the book Laz History (Lazların tarihi) was published. The authors had failed to have it published in 1964.[27]

Over the past 20 years, there has been an upsurge of cultural activities aiming at revitalizing the Laz language, education and tradition. Koyuncu, who in 1998 became the first Laz musician to gain mainstream success, contributed significantly to the identity of the Laz people, especially among their youth.[27] The Laz Cultural Institute was founded in 1993 and the Laz Culture Association in 2008, and a Laz cultural festival was established in Gemlik.[5][28] The Laz community successfully lobbied Turkey's Education Ministry to offer Laz-language instruction in schools around the Black Sea region. In 2013, the Education Ministry added Laz as a four-year elective course for secondary students, beginning in the fifth grade.[29]

The Laz language does not have a written history, thus Turkish and Georgian serve as the main literary languages for the Laz. Their folk literature has been transmitted orally and has not been systematically recorded. The first attempts at establishing a distinct Laz cultural identity and creating a literary language based on the Arabic alphabet was made by Faik Efendisi in the 1870s, but he was soon imprisoned by the Ottoman authorities, while most of his works were destroyed. During a relative cultural autonomy granted to the minorities in the 1930s, the written Laz literature—based on the Laz script—emerged in Soviet Georgia, strongly dominated by Soviet ideology. The poet Mustafa Baniṣi spearheaded this short-lived movement, but an official standard form of the tongue was never established.[30] Since then, several attempts have been made to render the pieces of native literature in the Turkish and Georgian alphabets. A few native poets in Turkey such as Raşid Hilmi and Pehlivanoğlu have appeared later in the 20th century.

The national instruments include guda (bagpipe), kemenche (spike fiddle), zurna (oboe), and doli (drum). In the 1990s and 2000s, the folk-rock musician Kâzım Koyuncu attained to significant popularity in Turkey and toured Georgia. Koyuncu, who died of cancer in 2005, was also an activist for the Laz people and has become a cultural hero. Sopho Khalvashi, a Laz singer from Georgia, was a finalist at the Eurovision Song Contest 2007.

Karadeniz pidesi – an elongated and closed form of the popular pide dish.

The traditional Laz men's costume consists of a peculiar bandanalike kerchief covering the entire head above the eyes, knotted on the side and hanging down to the shoulder and the upper back; a snug-fitting jacket of coarse brown homespun with loose sleeves; and baggy dark brown woolen trousers tucked into slim, knee-high leather boots. The women's costume was similar to the wide-skirted princess gown found throughout Georgia but worn with a similar kerchief to that of the men and with a rich scarf tied around the hips. Laz men crafted excellent homemade rifles and even while at the plow were usually seen bristling with arms: rifle, pistol, powder horn, cartridge belts across the chest, a dagger at the hip, and a coil of rope for trussing captives.